Turkey Decoy Tips and Hacks: 4 Ways to Increase Realism Without Breaking the Bank

I’ve had a love/hate relationship with turkey decoys for some time. In the beginning—when turkey hunting was a fairly new... 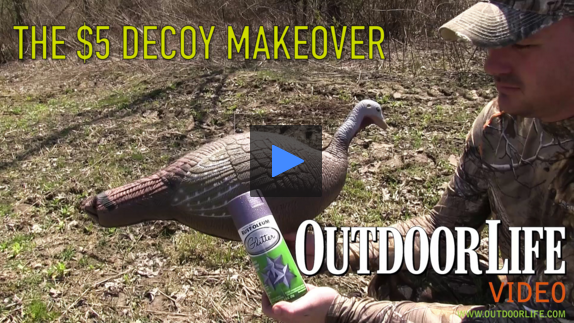 I’ve had a love/hate relationship with turkey decoys for some time. In the beginning—when turkey hunting was a fairly new phenomenon here in southern Michigan, when the birds were naive, when the spring season was filled with hard-gobbling turkeys that hadn’t heard every variety of call in the Cabela’s catalog—I loved turkey decoys.

Then things changed. The gobblers changed. Decoys became a device of loathing.

Turkeys were hunted harder. Decoys were somewhat crude and used often. The birds started to figure out the game. Then decoys changed. They became ultra-realistic and pretty pricey. The more realistic, the more effective. But you don’t need to break the bank to have decoy success. Here are a few tricks to help you kill gobblers and save some cash.

Those roll-up foam decoys of yesteryear are still readily available. They have their advantages: They’re light and easy to carry. They’re cheap. They also look as fake as a pair of pawn shop Oakleys.

Here’s how to fix that. Grab a can of Rust-Oleum Glitter spray paint. It’ll set you back about $5. I like the multicolor purple for turkeys.

Spray it on the feathered area of the decoy, avoiding the head and neck. Don’t worry, you won’t turn the decoy purple. All you’ll see if the shimmery iridescence that turkeys actually have. Build up glitter with light, even coats to the desired sheen.

How to Make Your Own Turkey Decoy Stakes by OutdoorLife

A decoy stake may seem like an inconsequential aspect of your setup. Until you get on scene and discover you forgot your stake, or you can’t keep your decoy from spinning like a top in the wind.
I recycle old carbon arrow shafts for use as decoy stakes. It’s simple to do and they’re fantastic for turkey decoys.

It’s as simple as cutting each arrow in half, removing the vanes, and using rubber bands to hold both pieces together. You can adjust each to length by sliding the rubber bands up or down and they store easily in a turkey vest.

I put a field point in each end of the stake. This makes it easier to push the stake into the ground and also allows the decoy to move freely in the breeze – and I’ve found that motion is critical on pressured turkeys.

To keep the decoy from moving too much in the wind, simply take one stake and separate it. Place one half on each side of the decoy. Now when the wind blows, the decoy can still spin freely and it will stop when making contact with the stopper stakes.

How to Add Motion to Your Turkey Decoy by OutdoorLife

This tip comes from CJ Davis of Montana Decoy and while it does apply specifically to the brand of decoy he represents, that doesn’t take away from the fact that this is a killer setup.

Montana’s 3D Purrfect hen is crazy light. Hang it from a tree limb in the woods using a length of paracord and you have a decoy that will move and mimic a feeding hen perfectly. It’s a type of natural decoy movement that gobblers likely haven’t seen.

Obviously, this tip won’t work on windy days. But if you have a slight breeze, it can add some crazy realism to your setup.

How to Set a Turkey Decoy Mega Spread by OutdoorLife

As turkeys have become conditioned to decoys, even those that look ultra-realistic, I’ve found myself having more success by increasing the number of decoys in the spread.

I hunt a lot of public land and tend to walk a fair bit to get away from roads and parking areas. Carrying a harem of decoys isn’t something I’m willing to do unless they’re light and compact.

This is accomplished by using a combination of collapsible 2D and 3D decoys.

The setup involves a single strutting decoy, a hen in a breeding position, a single jake, and a half-dozen or so feeding hens.

The key is to place the strutter near the breeding hen. The jake is pinned nearby. Position those decoys so that you can shoot as the gobbler attempts to face the strutter.

In this setup, the gobbler will head for the strutter or the jake first.

I believe that the multiple feeding hens and a larger spread is something gobblers see often in the woods and fields, but not many hunters are using that many decoys.

It creates a realistic scenario for the gobbler to respond to and doesn’t carry any negative experiences like a single gobbler and hen combination (a popular setup for hunters) might. When viewed from afar, those photo-realistic 2D decoys really make the setup look authentic.