Deer hunting is about more than big racks. It’s about developing a profound respect for nature, practicing conservation and taking... 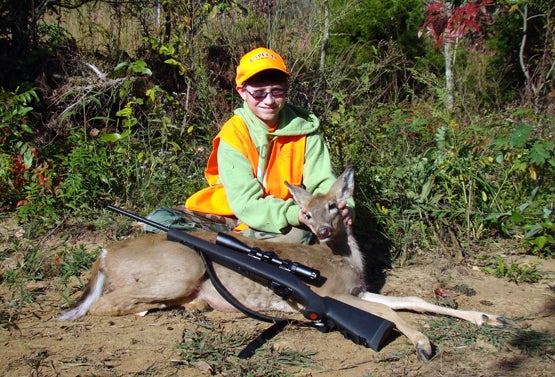 Deer hunting is about more than big racks. It’s about developing a profound respect for nature, practicing conservation and taking an active role in the cycle of life.

Hunting is also based on tradition, ethical values and sharing our heritage with others. With that being said, it’s extremely important for hunters to introduce new people to the outdoors in order to promote and preserve our hunting heritage. This is exactly why programs like the QDMA Military Youth Hunt are so valuable.

Recently, a dedicated BBZ fan and hardcore whitetail hunter named Doug Moutardier volunteered as a mentor during the QDMA Military Youth Hunt. According to Moutardier, this program is a great tool for sparking a genuine interest among youth in hunting and the outdoors.

“The intent of hunts like these is also to provide a hunting opportunity for children who have parents that are currently serving overseas or have been injured or killed in war. Without the QDMA Military Youth Hunt, many of these young people would probably not have a chance to spend any time in the woods this fall.”

The youth hunt took place on a private farm in Hardin County, Kentucky during the state-wide youth season. Mentors were paired-up with 30 children who took part in a weekend of whitetail hunting and fellowship that these young hunters will never forget. On this particular hunt, Moutardier teamed up with a young man named Alexander Davis whose father is a battalion commander with the 101st Army Airborne division that is currently stationed in Iraq. Davis is 13 years old and had never been hunting before this.

Moutardier had thoroughly scouted the area and strategically placed Davis inside of a 20-ft high box blind that overlooked a winter wheat field and some thick bedding cover. After daylight broke, several slick-headed does began to filter into the small field along the edge of the primary bedding area. Immediately, the young hunter’s adrenalin and heart rate kicked into overdrive at the very sight of the feeding does.

At this point, Moutardier could actually feel the tension inside of the blind and began to calmly coach Davis through the shot process. Without hesitation, Davis settled the crosshairs on the doe’s sweet spot and gently squeezed the trigger. The echoing blast of the .243 rifle ended a successful hunt, but began a new hunting career for this young man. All of us at Outdoor Life would like to congratulate Davis on a phenomenal first deer hunt and welcome him to the hunting brotherhood.

Furthermore, we would also like to thank Moutardier along with the other mentors that volunteered their time for this event. The QDMA Military Youth Hunt was undoubtedly a great way to pay tribute to both our hunting heritage and to the men and women that are serving in our military. The sacrifices our brave troops and their families make everyday should be recognized and honored by all Americans.

On a side note, be sure to stay locked on to the BBZ, because the big buck reports and stories have been rolling in over the past few days. Also, we would love to hear about what you’re seeing and doing in the field right now. Post a comment and let us know what is going on in your neck of the woods. Good Luck and Good Hunting!

To find deer movement predictions and the weather forecast for where you hunt, go to OL Weather. __