This is why every state should have a youth deer hunt. Gunnar Murray, 13, was hunting with his dad, Greg,... 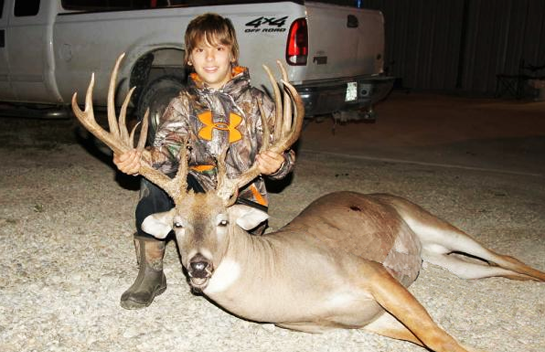 This is why every state should have a youth deer hunt. Gunnar Murray, 13, was hunting with his dad, Greg, last month during Kansas’ youth season when he spotted this 22-point buck with an impressive 23-inch spread.

They had been patterning deer on their farm all summer with trail cameras so when the season finally opened, they knew where to setup. On the second evening, they were sitting in a stand when a decent 10-pointer walked out.

Gunnar was getting into shooting position when they spotted a much bigger buck heading their way.

This from CJonline: _”The large buck walked under the stand and stopped and looked up at them. Greg thought it was all over and the buck would take off, but Gunnar pulled the trigger and his dad thought he saw the deer flinch.

The group had to use flashlights to look for a blood trail but they did not see any blood. Greg felt sure the deer had been hit so they kept looking.

Finally, Greg went down the draw the buck had come up and found him about 80 yards from where he had been shot.

The party immediately began with much yelling and high fives for Gunnar’s first deer.”_

Greg and Gunnar are waiting for the 60-day drying period to run out to have the buck officially scored.