Ella Perkins stalked through a chest-high soybean field to shoot a Kansas giant with the family .243 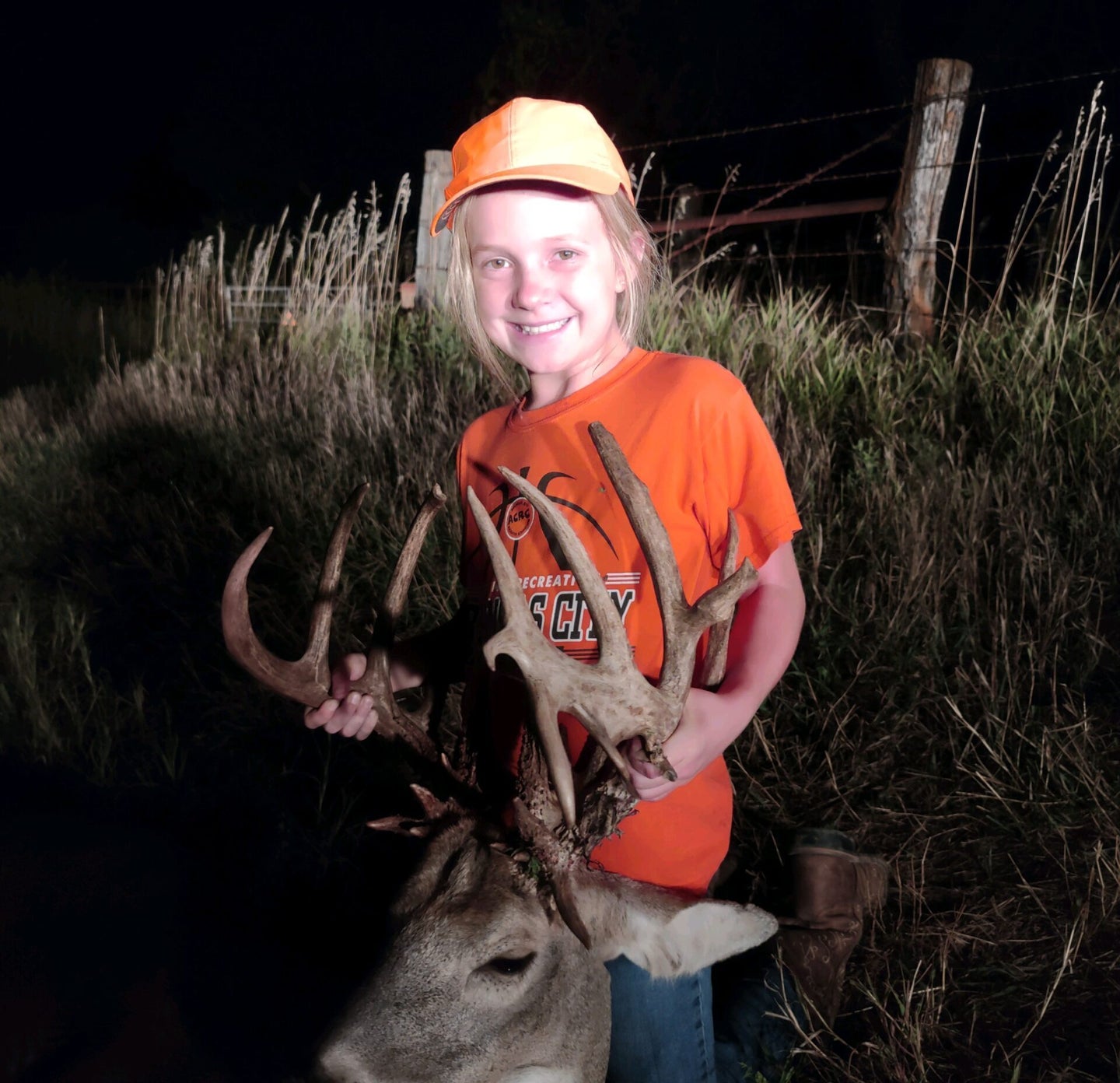 Cody Perkins grew up like most do in rural Kansas, partaking in a long tradition of hunting and fishing. Like so many outdoorsmen before him, he is trying to pass all that he has learned onto his 10-year-old daughter, Ella, and her older sister.

“I’ve just enjoyed deer hunting all my life, with my family on our farm; so getting Ella involved with that last year, harvesting her first doe was a joy to me and a new chapter for both of us,” he says.

In July 2021, Cody checked a trail cam on the family property; a massive 200-plus-inch velvet whitetail appeared in the photos. He had already told Ella that she had first dibs on the best buck on the farm, and now it was simply a matter of waiting for the Kansas youth season to open on Sept. 4. The two of them scouted, trying to find and pattern the deer for more than 40 days.

“I just couldn’t believe it when I saw the first photos of him in velvet. To see a deer like that was a surreal feeling,” Cody says. “I couldn’t wait to show her because I knew she was going to be so excited.”

The Perkins family farm has had a variety of unique deer on the property over the years. They suspected that this buck, which they called “Soda Pop” for its heavy Coke-can-sized bases, could be the offspring of another freakish buck taken by the Perkins in a previous season.

“I was just in awe of this buck and praying for us to just get an encounter with him during the youth season,” Cody says.

The buck wasn’t a regular visitor to Perkins’ trailcam. At one point, he disappeared for nearly three weeks. He had been seen on the edge of a soybean field just before sunset on multiple occasions, a promising observation that his bed was not far from the trailcam. With three days left before youth season, the buck stepped out in front of the trail camera in daylight for the first time.

After days of preparation and practice shooting her rifle, a .243 that most of her family had hunted with, Ella was ready for opening day with her dad. The heat of the Kansas summer was lingering, and their first sit was full of bugs, blowing does, and frustration.

“We stuck it out as long as we could and finally shooting light ended,” Cody says. “When we were exiting the field and got back to the truck, I got the notification from the cell camera that the buck had just walked by on the edge of the beanfield. We had just missed him.”

Due to busy family schedules, the two weren’t able to get back in the stand until the following Friday. The buck had vanished again, not showing up on the cell camera during that entire stretch. During the week, Cody checked all the cameras on the farm and identified where the buck was spending time. He was still on the property, but in a different area. The next day, Ella and her dad set out for another hunt, battling the heat and skeeters.

The rolling beanfield and west side of the property where Cody had located the buck didn’t have much cover. They settled on a couple of round bales on the field edge, which offered the only decent hide to glass the field and put Ella in shooting range. Early in the sit, a couple of old, stomping does made their way too close to the hay bales. They snorted and danced away, clearing out the field.

“I was a little deflated after that and could see it on her face too,” says Cody. “So I wanted to make a move to clear her mind and get her spirits up to let her know we were still in this and had time left.”

Making a Long Stalk Through the Beans

With a bit of daylight left Cody and Ella decided to make their way down through a valley in the field to check another corner. It’s not visible from the previous setup, but it was on the way back to the truck. Cautiously, Cody guided Ella through the beans, moving slowly to keep their eyes on the field and rolling terraces. As Cody was easing through the beans, which were nearly as tall as his daughter, the buck threw his head up in the far corner of a hayfield, among a group of deer.

Father and daughter continued to make their 100-plus-yard stalk in the 90-degree heat. When they ran out of cover, the buck was still more than 200 yards away. Ella dropped to her knees and steadied the family rifle on a bipod. Cody, who appeared calm, asked he if she felt comfortable taking the shot. Ella said that she could do it. She was already holding the scope’s crosshairs on the vitals of the buck.

“I was shaking, but I was still confident and knew from my practice that I was a good shot,” Ella says. “I just started squeezing the trigger slowly and the gun went off. I didn’t even see what happened after, and the deer in the field started running everywhere.”

The magnitude of the moment nearly overwhelmed her dad.

“I honestly had no idea what the outcome was going to be,” Cody says. “I flinched bad when she shot, and it surprised me looking through my binoculars, and the deer in the field went everywhere. I finally got on him and he had his tail up, just jogging away at a normal pace. I didn’t think he looked hurt. He took one jump over a terrace, and I never saw him again in the native grass.”

Cody only found a few small patches of blood on the grass where the deer had been standing when Ella shot.

“Once I saw that, I got even more nervous as I really didn’t know where the hit was. But I knew she hit him. So, I just explained to her what the possible outcomes of this were going to be, so she wasn’t confused or getting upset.”

The duo went back to get Ella’s grandpa and her older sister for extra help, and to hopefully share the best outcome in the coming hours as a family.

“We got back to the field with some better lights, and I had Ella stand at the last blood so we wouldn’t lose it in the native grass,” Cody says. “We couldn’t hardly move the blood trail or make any progress and did an intensive grid search in that area to no avail. I had made one wider loop behind that terrace where I thought I had last sight of him and just stumbled into him piled up under a cedar tree in a washout. I was dumfounded as I had already been so close to this exact spot. I was in total shock he was laying there dead.”

Dave Palmer, who happens to be my own father, greenscored Ella’s buck at 208 6/8 inches with 26 scoreable points. It’s a decades-long tradition that has taken place in the basement of our family home—he has done this for family and friends for years. It will not eclipse the world-record buck taken by another Kansan teen, Paslie Werth, who shot a 271 4/8-inch buck in 2020, the largest ever taken by a female hunter.

But that doesn’t much matter to Ella. She just kept chattering about how she couldn’t wait to eat the deer jerky that came from this buck as my dad scored it. To her, strips of dried venison are more important that a 200-inch non-typical, a perspective I can get behind, and more of us should adopt.

“I was just so happy to be there with Dad and get to shoot my first buck,” she says. “It was really amazing to get to see it and touch it, to see its rack and how pretty he was. I really like eating deer jerky, and I was looking forward to that already…This experience with my dad and family just makes me happy because I know how excited Dad was and I liked that part the most.”