It was the first week of November and Mike Giarraputo was ready for an all day sit in the deer... 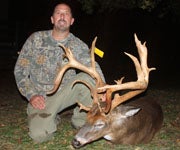 It was the first week of November and Mike Giarraputo was ready for an all day sit in the deer woods. With the rut right around the corner, it wouldn’t be long before the bucks started cruising.

The morning started off slow and to Mike’s surprise, not a single deer walked by his stand until the middle of the day. It was a young six pointer that meandered by Mike’s stand and checked on a few scrapes. As the deer walked off, Mike wondered what else might show up that afternoon.

An hour and a half later, Mike heard the sound of deer walking through the leaves. When he turned to see what deer was making the noise he saw the buck’s enormous rack. Main beams arched up and down while points curled upwards, outwards and downwards in all directions. This wasn’t just a freak buck; this was a buck that had the potential to break New York State records.

As the buck stood just out of range, a big eight pointer cautiously approached. The giant buck snort-wheezed at the eight pointer three times. While the big eight pointer tempted Mike with an easy broadside shot at 18 yards, Mike knew he just had to wait for a chance at the big nontypical.

With each step the buck took, Mike’s breathing grew heavier and his heart rate hastened. At 20 yards, the buck crossed through an opening and Mike stopped the deer. At the sound of the shot, the buck took off. In the heat of the moment, Mike wasn’t sure exactly where the arrow hit, but he had a feeling it was farther back than he would have liked.

Climbing down from his treestand, Mike picked up the blood trail and followed it for 80 yards before finding the massive freak buck stone dead. The Suffolk County buck has 23 points and a gross green score of 217″ with three points broken off. Not only does this buck put Mike into the 200 club, but he also has a chance to get his name in the number one spot in the record books for the largest Non-Typical Archery Whitetail in New York.