This year Jason Erb, 41, succeeded in turning an uneventful bow season into one he’ll never forget. The Ohio native... 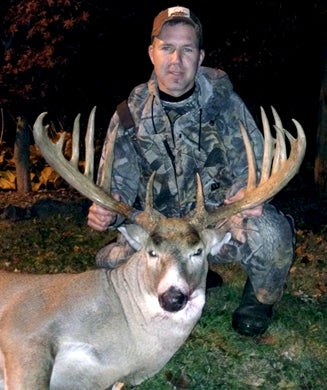 This year Jason Erb, 41, succeeded in turning an uneventful bow season into one he’ll never forget. The Ohio native harvested this huge whitetail in Columbiana County, Ohio on Nov. 3. The buck could easily surpass the existing Pope & Young Club record to become the county’s largest typical of all time. Here’s how Erb made it happen.

Erb was hunting a ladder stand at one end of a small grassy field scattered with apple trees. Just after sunset a doe and two yearlings moved into the meadow. The doe circled the field then tucked her tail and entered the woods 10 yards from Erb’s stand. Guessing a buck must be nearby, Erb picked up his bow. Less than a minute later, he saw a deer emerge near a scrape 40 yards away. As the whitetail stretched its neck to reach a licking branch, Erb spotted antlers.

But the light was fading fast and it was difficult to determine the buck’s size. “I knew the antlers were wider than the ears, but couldn’t say how big,” Erb said. The buck headed for the yearlings, browsing across the field toward Erb. At last he decided the buck was a shooter and drew his bow while seated. The buck paused broadside at 18 yards and Erb released his arrow, just two minutes before legal light ended.

The broadhead struck vitals and the buck ran into the woods. A few minutes later Erb climbed down to inspect the field. He discovered blood and two-thirds of his arrow, then returned to his truck to wait.

“I’ll be honest with you, I sat in my truck for 45 minutes and did nothing but pray to God that I’d find this deer,” Erb said. “…I’ve lost deer before and it just makes you feel sick and you never want to hunt again. So all this is going through my mind.”

Erb followed the blood trail 80 yards into the woods. What he first mistook for a log turned out to be his buck, and Erb began to realize he’d killed a monster. “I’ve just shot the largest deer that I’ll ever shoot in my entire life,” Erb said. On trail cameras, Erb had captured a handful mature bucks in the area, but he had failed to photograph this bruiser. Erb called his buddy to help haul the buck from the woods.

“I could’ve cared less how big he was, I was tickled that I’d harvested my deer,” Erb said.

But the buck’s size was certainly a bonus. Erb’s taxidermist measured the buck’s unofficial gross score at 193 3/8 inches. According to Pope and Young Club records, the largest Columbiana County typical scored 158 1/8 inches and was harvested in 1986. Once officially scored the buck should easily overtake that county record. The largest P&Y typical ever taken in the state of Ohio measured 198 3/8 inches and was taken in 2004.