When Isaac Grindle’s buck hit the leaves in Knox County, Maine, last month, he expected to walk up on an... 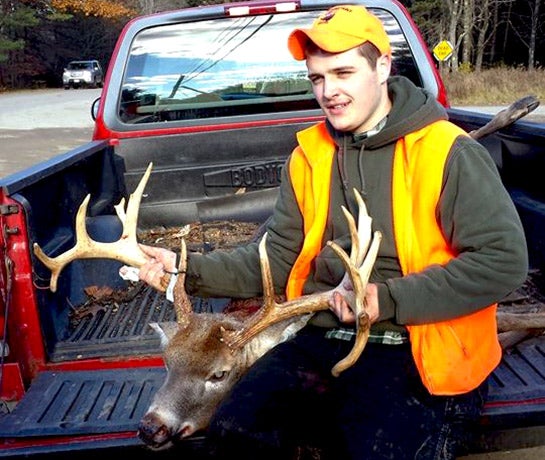 When Isaac Grindle’s buck hit the leaves in Knox County, Maine, last month, he expected to walk up on an eight-pointer. Instead, the 21-year-old discovered a bruiser with one of the largest spreads ever seen in the state. The buck’s unusually wide rack measured a whopping 33 inches and could rank third for the largest nontypical spread ever recorded in Maine.

Grindle was running late on the morning of November 9, and it was well past legal light by the time he climbed into his stand. He set up in a clump of oaks on private property near his home, his back against the sun and an apple orchard up the hill. An uneventful hour passed before Grindle heard a strange noise. A bleating doe emerged from a pine gully off to his right, and Grindle caught a glimpse of her moving through a thicket. “She was making all kinds of noise,” Grindle said. “I’d never heard a deer do that before.”

The noisy doe disappeared but Grindle kept an eye on the pines. Ten minutes later he heard two loud crashes and a deer appeared in the brush at 90 yards. Grindle could tell it was a buck, but he guessed it wasn’t much bigger than a six or eight-pointer. He raised his 30-06 and took the first clear shot available. The deer dropped where it stood at 85 yards.

Grindle called a buddy and climbed down from his stand. When he reached the buck, however, Grindle wasn’t prepared for what he found. “I think I went into shock,” Grindle said. “I saw that thing was laying there-it was just this humongous deer looking at me.”

Neighbors had reported a huge deer with drop tines in the area, but Grindle had never seen the bruiser himself. Grindle called his dad and a hunting buddy, and reinforcements arrived to help retrieve his deer. The buck weighed 222 pounds dressed and it took the hunting party an hour to remove it from the woods.

The nontypical buck measured an unofficial 170 inches gross with 16 scoreable points. This alone makes for a world-class buck, but the spread is where things get interesting. The buck’s surprisingly wide rack measured 33 inches across. This could place Grindle’s buck within the top three nontypical spreads ever recorded in Maine, and among the top 30 overall spreads in the Boone and Crockett Club record books. Maine’s current first place B&C record for largest spread measured 34 4/8 inches and was picked up in Hancock County in 1975.

The Grindle buck’s inside spread also taped an impressive 30 inches, which could qualify it as the second-largest inside spread ever taken in Maine. The first place buck was taken in 1990 and its inside spread measured 32 6/8 inches.