The Night I Almost Poached a Trophy Buck

I have been writing about an Illinois hunt with Whitetail Properties for months now. If you missed those previous posts,... 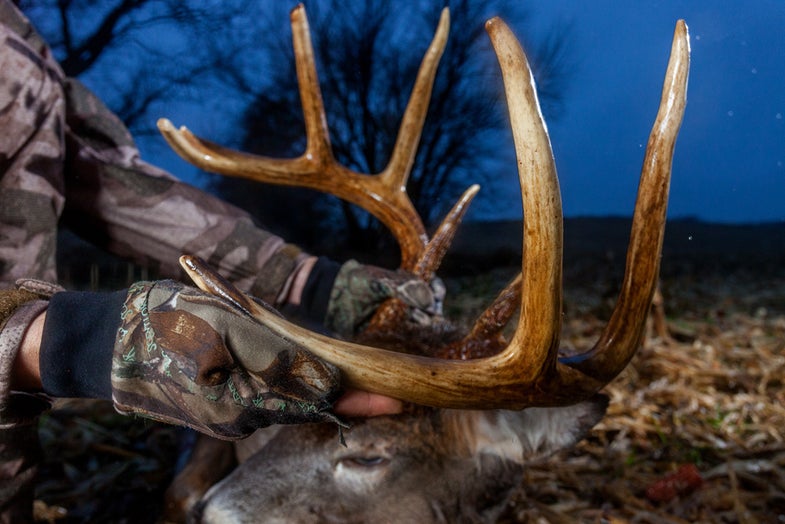 I have been writing about an Illinois hunt with Whitetail Properties for months now. If you missed those previous posts, here’s a quick recap…

All year I’ve been flying from New York to Illinois to scout a 240-acre farm with Aaron Milliken and Michael Turbyfill. We all worked hard hanging stands, planting food plots, and setting trail cameras. The whole idea was for me—an average, but diehard deer hunter—to shadow Milliken for a year and learn about what it takes to successfully hunt mature bucks and manage a property at the highest level. The year’s worth of work would to be rolled up into an OL magazine feature for 2015.

We ran into some major setbacks, but by the time we finally turned the calendar to bow season we had a handful of good bucks on the property. There were two specific bucks we were really after: a big, mature 8-point and a giant buck with gnarly forks and kickers. I hunted the 240-acre farm and another nearby property as hard as I could during the bow season. I sat on stand for nine days from sun-up until sundown and never killed a buck. (I had plenty of chances and did miss one after my arrow deflected off a branch. Also, Turbyfill killed a great deer.)

Fast forward again: Now it’s Saturday afternoon of the first shotgun season. I’m sitting on the north edge of a cut cornfield waiting for deer to come out to feed. I’m thinking about the time I’ve spent on this whole project (my boss never misses a chance to remind me of all the days I’ve spent out of the office). Milliken and Turbyfill have spent a lot of time on it too, and money, and their hopes are high. Tomorrow it’s supposed to pour rain all day. This evening might be my last, best chance…

In the fading light I spot six deer entering the field. I glass them through some timber and see that there are two shooter bucks with four does—one buck is a bit bigger than the other. The small herd is heading toward the middle of the field. Soon they’ll pass a corner and enter a shooting lane at about 100 yards. I trade my binos for my shotgun. I’m shooting a scoped Winchester SX3 and XP3 2 3/4-inch slugs. We settled on the 2 3/4-inch slugs because they shot the tightest groups out of the gun, and we knew my shot would likely be 100 yards or more.

I pick up the first two deer in my scope…doe, doe, and then I see the third deer is a buck. I can tell he has a high, heavy rack, and think that he must be the bigger of the two bucks. The deer are moving at a pretty good pace across my shooting lane and I’m running out of time. I don’t want to risk trying to find the second buck in my scope only to realize he’s the smaller of the two, and then run out of lane to get back on the first buck.

This is my deer. I fight off a brief fit of buck fever, let out a deep breath, and squeeze the trigger.

In the recoil, I lose sight of the deer. I hear one tear off through the field. The others hesitate for a moment and then scatter, disappearing in the darkness of the field. I wait, listen, and start to second guess myself.

After a few minutes I hear the deer circling back toward me—they’re walking the field edge that I’m sitting on. I quickly check my watch and see that I have literally one minute of legal shooting time left. A few does are in the timber and I hear another deer coming my way over my left shoulder. About 30 yards out, clear in the field comes a buck. He’s got a high, heavy rack, and he’s a giant. He would be, by far, the biggest buck I’ve ever killed. He must be the bigger of the two deer…but is this the buck I already shot at? Did I miss him and now he’s circled back? I only have one buck tag and there is no party hunting in Illinois. If I make the wrong call…

I put my crosshairs on his shoulder as he keeps walking by broadside. He’s not injured. I touch the safety with my index finger, but stop just short of pressing it—I can’t shoot this deer. I keep my crosshairs on his shoulder as he walks out of the field, as if I’ll suddenly get some sort of sign from the heavens that it’s okay to shoot him. But I don’t, and the buck slips away.

I unload the shotgun with shaky hands and slowly climb out of the stand. By the time my boots hit the ground I’ve fully convinced myself that I missed the buck the first time and then failed to shoot him the second time when he strolled by at 30 yards. I’m in no condition to look for a blood trail on my own right now. So, I decide to walk back to camp to get some help looking for sign of a hit. But along the way, I’ll walk in the direction that I heard the one deer run through the field.

I walk slowly, shining my headlamp down each corn row. After about 200 yards I spot an eye glowing back at me down one of the rows. I take a few steps closer and watch a beautiful 8-point rack materialize out of the cut corn.

I sit down next to the big deer and admire the rack. At the moment, I’m too overcome with relief and shock to realize that he’s the big 8-point we’d been trying to pattern since summer. I’d learned so much this year about trophy buck behavior, stand placement, scent control, and land management that I’d almost forgotten the most important rule of all: Deer hunting is fun.