Lots of folks will sear tenderloin medallions or wrap them in bacon and flash char on a hot grill, but... 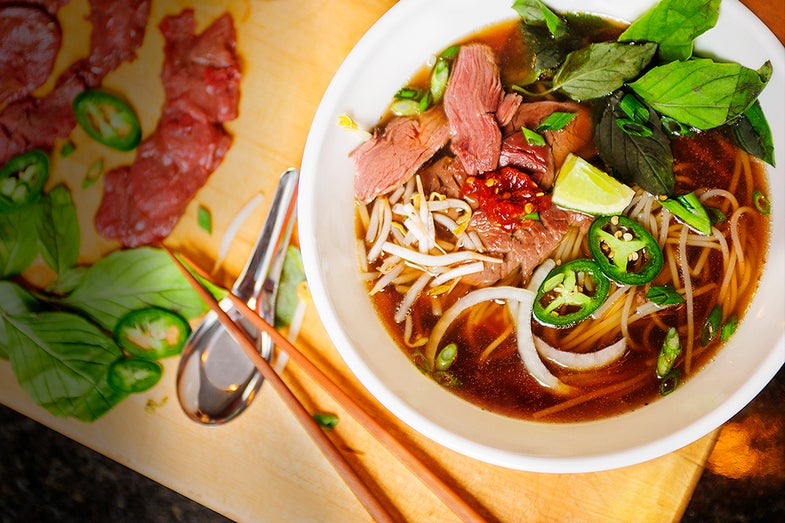 Lots of folks will sear tenderloin medallions or wrap them in bacon and flash char on a hot grill, but I decided to try something a little different.

At first I considered venison tenderloin carpaccio. The pure bliss of paper-thin, raw tenderloin delicately marinated, then sown with Maldon Sea Salt Flakes and paired with a smokey Manhattan, or some Pappy Van Winkle bourbon—well, you’d think you’d died and gone to heaven. But I’ll save that for when a bottle of Van Winkle Reserve comes into my possession.

Enter a recipe for a steaming hot bowl of Vietnamese pho (pronounced, “fuh”). On the surface it’s a very simple dish: broth, noodles, a protein, a few sprouts, herbaceous greens, and an optional dollop of chili paste and squish of lime for a little zing. And yes, while the ingredients are few, making authentic Hanoi-style pho is an artful, time intensive labor of love. Not unlike the time we spend performing inherited rituals leading up to, and during a hunt. There is beauty in both.

The web has a few wild game pho recipes floating around, but none seemed to involve the 8-hour plus attention to the broth that merits pairing it with wild venison tenderloin. It is the time-tended broth that makes pho supremely delicious rather than “sort of good in a weird kind of way.”

Here’s how to make it. 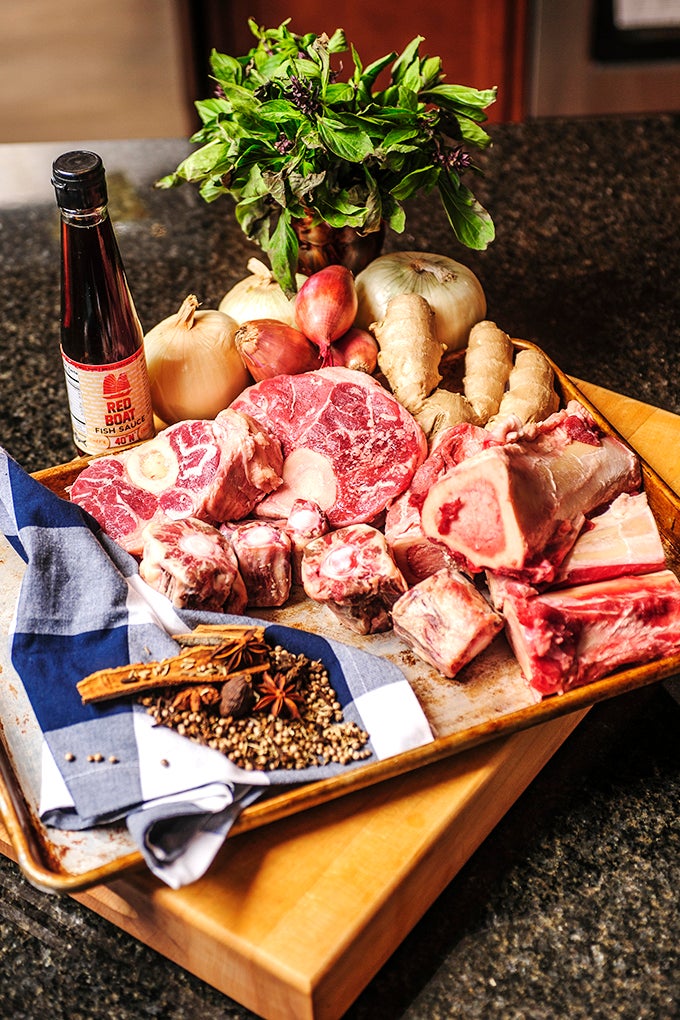 Note: I purchase my pre-mixed pho spices, fish sauce, rice noodles, Thai basil, bean sprouts, ginger root, and Samba lOelek chili paste at a local Asian grocery, but you should be able to get what you need at most grocery stores.

Blanch the soup bones and oxtails in boiling water for 3-5 minutes. This removes some of the fat and impurities. The key to a quality broth is clarity and depth. Blanching aids clarity. Depending on the size of your blanching pot you might need to do this in couple batches. After blanching, give the soup bones a quick rinse under warm water and transfer into a second pot filled with approximately 3 gallons of water. Turn up the heat until the bones begin to boil and then reduce to a very gentle simmer.

While the heat is rising in the pot, halve the onions and ginger. Along with whole shallots lightly char over an open flame. I do this by putting a metal ‘cooling’ rack over two burners and using like a grill. Add charred ingredients to the pot.

Lightly toast the contents of one of the spice packets over a medium flame to release the natural oils. 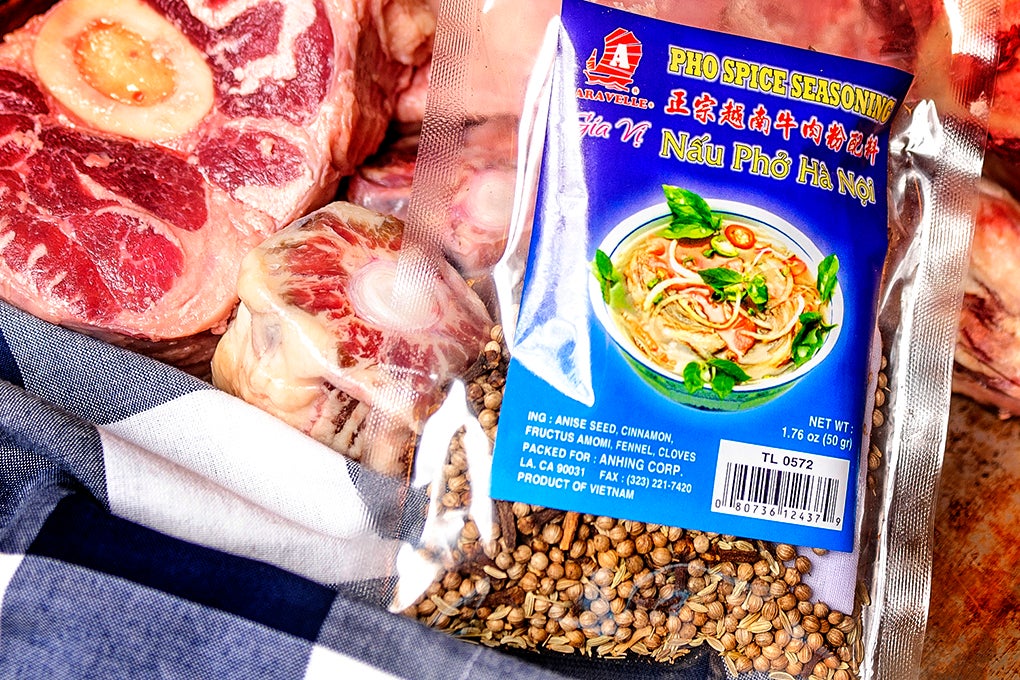 This combination of spices is crucial to a deep and complex pho broth and is the underlying flavor signature of a great pho. (Vietnamese “Siagon” cinnamon stick, black cardamom, star anise, fennel, cloves, and coriander.)

Once toasted, put in the spice bag that is included with the packet and drop in the broth. With everything in the pot, simmer very gently uncovered for approximately 8 hours skimming fat and scummy froth every so often. A second key to clarity in the broth is a very low simmer for a very long time. The long simmer adds the depth and rounded rich flavor components that are characteristic of pho. You’ll know you’ve achieved the right temperature when the water bubbles are barely erupting on the surface.

After 8 hours remove the vegetables, soup bones and oxtails. Strain the broth through a fine sieve to remove any wobbly bits that feel off during the simmer. Put strained broth back on the stove. Depending how much of the liquid has boiled off add 1/3-1/2 cup of fish sauce. Stir and taste and make adjustments according to preference. If you not tasting the spices, toast up another batch and toss it in. (That’s why I buy two packets.) Continue simmering for another hour. 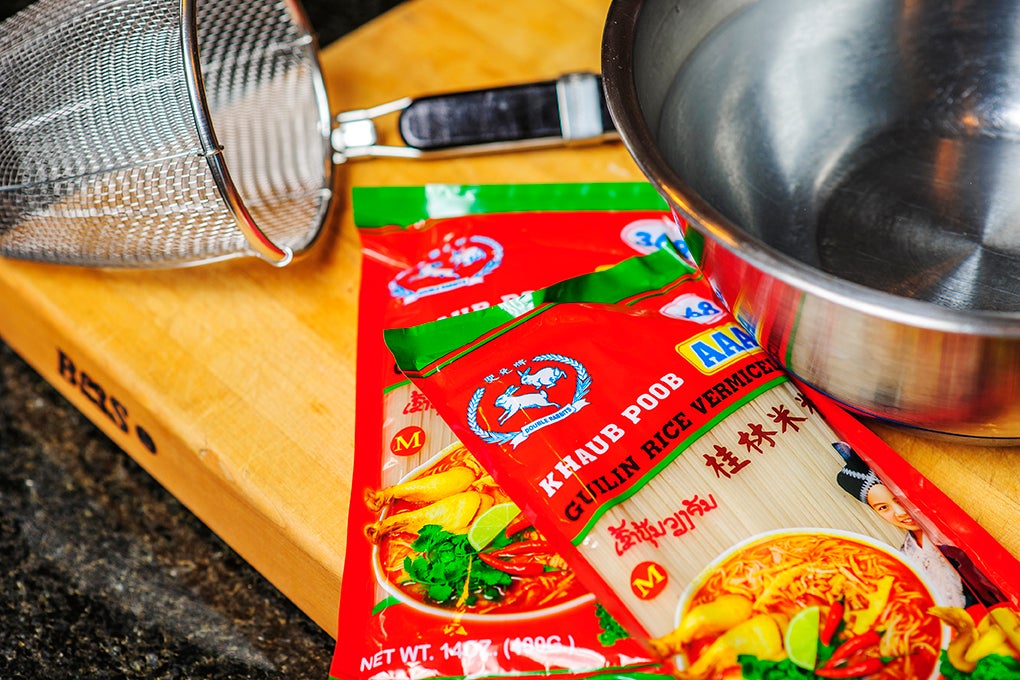 While the broth continues to simmer get the rice stick noodles to soaking in tepid water. 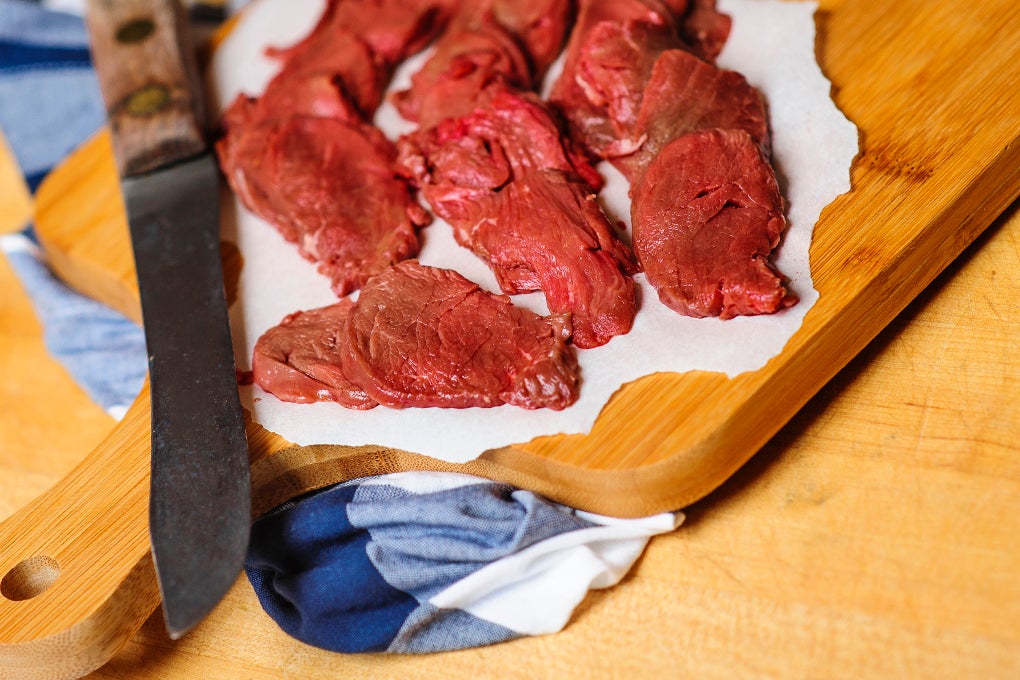 Thinly slice the venison tenderloin across the grain.

To serve, take the soaking noodles and briefly heat in boiling water. Arrange noodles in the bases of a deep serving bowls. Add the raw tenderloin on top. Ladle over with hot broth. Add sprout, basil, scallion, onion, and lime as preferred. If you’re hankering for some heat, float a couple jalapeno slices, stir in a bit of chili paste, and enjoy.