Every hunt is a learning experience, and this year’s sheep hunt was no different. One thing that I had to... 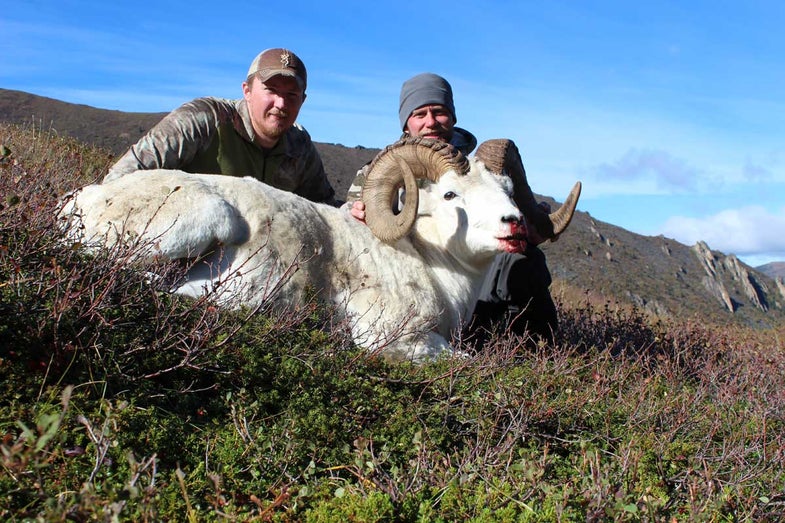 The author (left) and his buddy Frank with Frank's ram. Tyler Freel
SHARE

Every hunt is a learning experience, and this year’s sheep hunt was no different. One thing that I had to re-learn this year was not to overlook unlikely places for game, in this case big Dall rams.

We were on the sixth day of our hunt, hiking up a ridgeline overlooking several basins. We spotted about 25 sheep down below us, most of them on one side of a creek, and two rams on the other side. With my initial look through the spotting scope, I saw that the vast majority of the sheep on the other side of the creek were ewes and lambs, and in my quick sweep, saw the pair of small rams. I turned my focus to the rams that were bedded directly below us, trying to get a good look at the bigger of the two.

Pretty quickly after my glass-about, Frank took his turn on the spotter, and he saw what I had missed, a big ram that was mixed in with the ewes and lambs. I had simply overlooked him. Other than seeing the two smaller rams in that bunch, I just didn’t take the time to look at every sheep in that bunch. Typically, you don’t see big rams with ewes and lambs, it just doesn’t happen, until it does. I wanted to shoot that ram pretty bad, but Frank did see him first, so he had dibs. Ultimately, it was a big win for us to get a ram like that, regardless of who was doing the shooting.

Although, this learning experience had a happy ending, it’s still a good lesson. Make sure to not overlook the places you don’t expect to find the big one. Obviously, prioritize the places you do, because most times that’s where they’ll be, but my “relearning” experience this season makes me wonder how many have slipped away simply because I overlooked them.

Sometimes they really are hidden in plain sight.