Traditional Bowhunting Q&A: Is It Time to Switch from Your Compound to a Longbow or Recurve?

Is this the year you get the bug to hunt with a traditional bow? The year you become “infected” with... 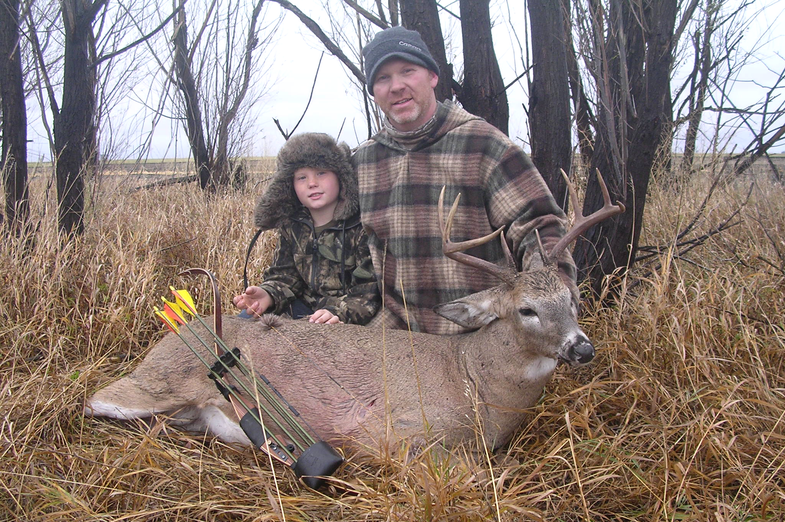 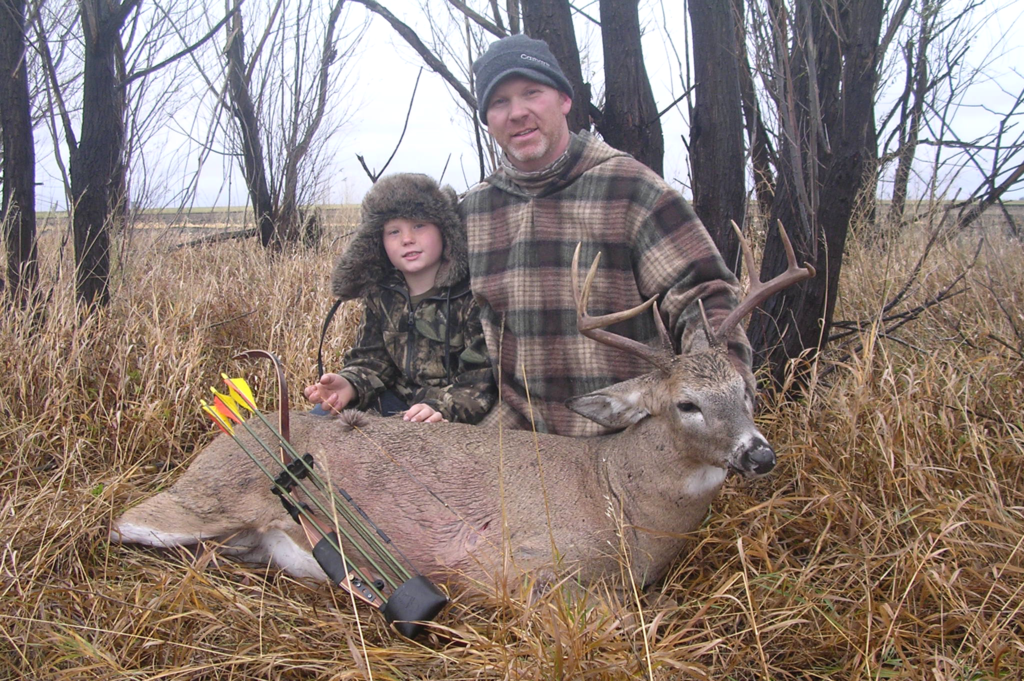 Is this the year you get the bug to hunt with a traditional bow? The year you become “infected” with the desire to replace your futuristic, metal wheel-and-pulley wonder, with a weapon more reminiscent of those flexed by native Americans some 300 years ago? Does this kind of swap really happen these days? Indeed it does.

Every year, a percentage of compound-bow-toting hunters chooses to eschew all the many “latest and greatest” upgrades touting more speed, adjustability, and other gadgetry—and take an intentional performance leap backward. The new twinkle in their eyes? Far simpler, almost featherlight, hand-crafted wooden bows. Many will never look back; some will call it the best decision of their lives.

What is it about the simple “stick and string”—recurves and longbows—that can be so alluring? And in the end, are they a help or hindrance to bowhunting success? And what about their impact on the total bowhunting experience? For a stab at some answers, I spoke recently with Minnesota’s Chad Holm, a compound convert himself. Holm, 44, is not only a strong traditional bowhunting advocate, he’s the owner/operator of cleverly named Holm-Made Traditional Bows, based in Brainerd.

Holm has been making his own traditional bows for about 14 years, the past nine or so professionally. Currently, he builds about 60 to 65 bows per year, which amounts to a good-sized side business for the full-time physical education teacher of 19 years. We spoke just days after his 11-year-old son Jacob used a compact recurve to bag his first big game animal, a whitetail doe, the evening of the 2015 Minnesota deer opener.

OL: Why get into building your own traditional bows at a time when compounds were (and continue to remain) the undisputed popularity king?
Chad Holm: At the time I just wanted to extend the bowhunting season, I didn’t want it to be done after three months, I wanted to have some involvement year-round. For me bowhunting has always been the focus, more so than archery; I have a real passion for the outdoors. I do enjoy archery too, but not target archery so much—for me the draw is bowhunting and 3-D archery. I really like the ‘hunter-gatherer’ lifestyle, and I like to use archery as a means for providing my family’s food.

OL: What are the big differences compared to hunting with a compound bow?
CH: I started out with a compound, it took me several years to get a deer, then one season I shot three deer with my compound. The following year I switched to a recurve. There were a couple reasons; for one I just wanted more involvement, and to do something different, a new challenge. Also, I was introduced to a man in my hometown who shot a recurve, so I had a good resource.

At that time I thought traditional archery was something almost spiritual, even mystical. I also believed it was something that took an extreme amount of athletic ability, or special instincts. Then I found it was something everybody can do. I soon learned everyone has a different effective range, but anyone can do it.

When you hear the term “instinctive shooting,” a lot of people get intimidated by that—they think it’s something you have or don’t have. And of course that’s not true.

OL: What are some advantages to hunting with traditional equipment?
CH: The simplicity of the equipment, there isn’t much to go wrong; one of the only things to worry about is cutting your bowstring, so all you need to carry with you is an extra string. You don’t need an entire tool kit. You’re also never second-guessing your equipment, like some compound users will worry about whether their sight or rest has moved. With traditional equipment, you know that if you’re not shooting well, it’s you.

OL: What are some disadvantages to traditional bowhunting?
CH: It’s a shorter-range game. It doesn’t matter how much you practice, you’ll never reach the same level of proficiency as you can with a compound, and people need to understand that. Even if you commit yourself to it and practice regularly and religiously, it’s still going to be a shorter-range game.

OL: Can you quantify “shorter range?” What’s your own effective range and what should it be for most traditional bowhunters?
CH: By and large, for the majority of people it’s a 20-yard or less game, and for some people less than that. My own preference is 10 to 12 yards, and if everything is right, I’ll shoot a deer at 20.

For guys out west in the wide-open areas, especially chasing game like pronghorn, a traditional bow can certainly be more of a handicap, but in the big woods of Minnesota, a traditional bow is really no handicap at all. Up here, most of our shots are 15 yards and under, and if you interview bowhunters about their average treestand shot up here, even compound guys, the majority will say 15 yards—and many will say under 12 yards.

It’s like any equipment you choose, there’s an effective range. It takes discipline to stay within that range, whether you’re using a rifle, a compound, or a traditional bow.

OL: What did it feel like to bag your first deer using traditional equipment?
CH: I do remember that clearly, and there was a lot of doubt in my mind whether I could do it. Back then in Minnesota we had two really tough winters back to back, in ’95 and ’96. The deer numbers were way down, and the following year I hunted over 60 times—counting both morning and evening hunts, and I only saw deer seven of those times while sitting on stand. That year I ended up getting a small buck at the end of October, and that was pretty exciting.

OL: Why should someone buy a custom bow?
CH: You do it because you know the maker has been involved in every step of the process—it was all done by the same guy, and you get the maker’s “stamp” on it. The other thing is, a custom bow purchase is very important to the outdoorsperson, it’s a personal thing, and they have options they can choose: the types of woods, the grip, the length, and poundage. And in the end a custom bow really doesn’t cost that much more than a mass-produced bow.

OL: What’s the current “hot” construction for recurves and longbows?
CH: It seems like every bowyer has a “reflex-deflex” longbow, those are really popular. Whereas a traditional longbow has straight limbs, when you put reflex-deflex into the limbs, we can stiffen those limbs, and use less material, and make the limbs lighter. The result is more energy from the bow will be transferred to the arrow, as opposed to moving the heavier limbs. So we’re putting recurve-like characteristics into a longbow, and the result is you get recurve-like speed, but still retain the simple characteristics of a longbow, but without the handshock of a more-traditional longbow.

OL: What are three tips for someone interested in traditional bowhunting?
CH: Number one, search out a reference in your area, someone who has done it for a while and can offer advice; there are people out there if you look, especially in archery clubs.

Number two, don’t set your expectations too high. Like I’ve said, there are people who think that if they dedicate themselves, there is no reason they can’t be effective at 30-40 yards, and that’s faulty thinking. You need to understand realistic expectations so you won’t be disappointed later.

Number three, realize that traditional archery is a journey, it’s a process, it’s something to enjoy and have fun with. It’s not about competition, it’s not about keeping score or shooting big animals, or recordbooks. It’s about enjoying the process.

OL. What should people who shoot compounds know about converting their draw length and weight specs to a trad bow?
CH: First of all, people who are converting will lose anywhere from one and half to 2 inches in draw length. And trad bows usually lose or gain two pounds for every inch of draw length. So you have to know your correct draw length.

As far as poundage, if you go back to the 1950s and ‘60s, seven out of 10 traditional bows were 45 pounds. Then the compound came out in 1968, and people who shot 60- to 70-pound compounds, they eventually shot 50- to 65-pound recurves, and people really struggled with accuracy.

Today, people are realizing you don’t need that kind of poundage, especially with modern bow construction, modern strings, and modern carbon arrows. Today a 40-pound bow will shoot right through a deer.

OL: What’s your opinion on movies like The Hunger Games—are shows and movies with archers helping traditional archery grow?
CH: Personally I have not noticed much of a change over the last nine years, but I do notice that the National Archery in the Schools Program has had a tremendous impact on getting bows in kids’ hands. I run the NASP program for six different elementary schools and it’s just fantastic.

Conversely, I think the Outdoor Channel has promoted technology and trophy hunting so much that it has hurt traditional archery. They tend to promote the end result rather than the process, so the younger generation growing up with the Outdoor Channel, that’s what they see—that the way to hunt is to use as much technology as we legally can, instead of relying on our skills and woodsmanship. I have some concerns about where bowhunting is going for that reason. 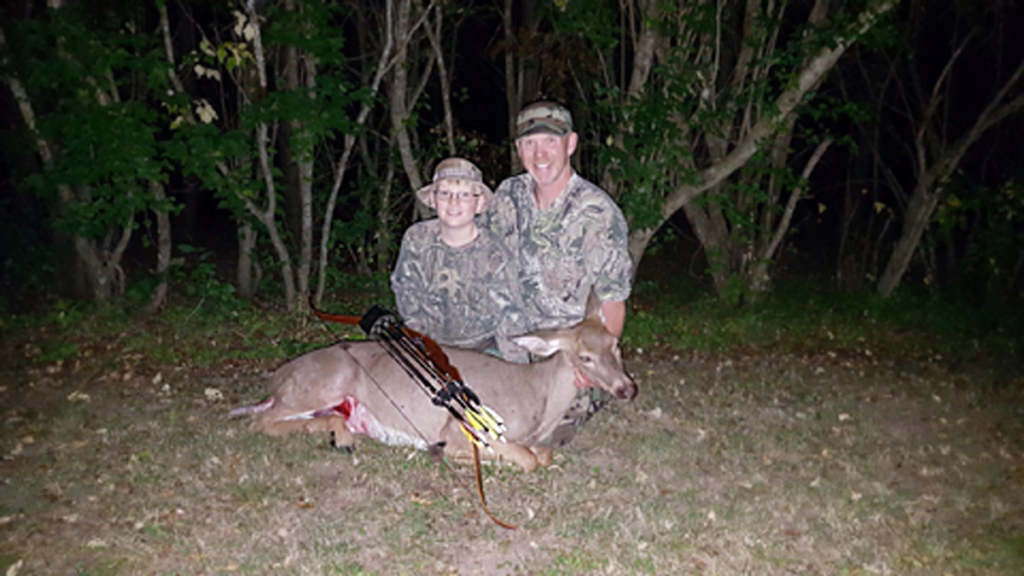 OL: Your son bagged a deer a few days ago with some relatively lightweight equipment. For those who might think they can’t pull a heavy enough bow, what were the specs of your son’s equipment?
CH: My son Jacob is 11, and he shot an adult doe last Saturday night, opening evening. It was his first deer with a bow. He used an old, vintage Shakespeare recurve made in the ’60s; he likes that bow, it’s a 46 pounder at 28 inches, but it’s about 33 pounds at 23 inches, which is his draw length.

He was in a treestand about 12 feet high, and I was hunting about 100 yards away. Jacob has been shooting a trad bow his whole life, but his effective range isn’t very far. I have encouraged him to use his cousin’s compound bow, but he wanted to use the recurve. I told him the shot had to be under 10 yards, and the shot ended up being about 8 or 9 yards.

There is very little resistance in the ribcage of a deer, bear, or even an elk, and with a good two-blade broadhead it will zip right through there. Jacob’s shot not only went through the ribcage, it stuck in the ground. I couldn’t believe it; I didn’t expect that arrow to be sticking in the ground.

To have Chad Holm build you a unique custom traditional bow, contact him at (320) 360-4479; www.holmmadetraditionalbows.com