During early summer, big bluegills, in full spawning hues, start their gradual migration toward the shallows. As water temperatures reach... 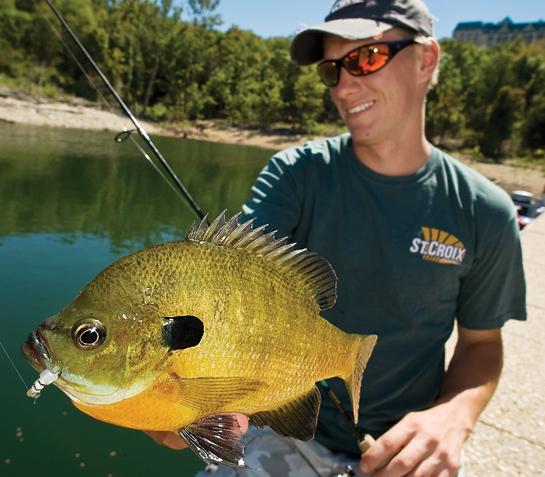 During early summer, big bluegills, in full spawning hues, start their gradual migration toward the shallows. As water temperatures reach 70 degrees, their breeding nests begin to appear–­imagine elephant tracks on a lake bottom. Breeding often continues through August. These fish, the biggest bulls you’ll see all year, are aggressive biters and hard fighters. Perhaps best of all, their shallow-water haunts are easily accessible from a boat or from shore.

Minnesota’s Dave Genz, an icefishing master, calls these fish “no-nosers”–nothing but forehead. He focuses on them the instant that the ice melts, trading his jigging sticks for 12-foot spinning rods. But that’s pretty much all he changes. His terminal gear strategy remains a constant, and it’s a topnotch way to catch plate-sized fish.

Rigging Up
Using a relatively simple setup, Genz relies on a tiny ice jig tipped with either live bait or soft-plastics and fished under a pencil-thin balsa float. With the help of two sliding silicone sleeves, the float is easily adjustable for depth.

He balances the float so that the combined weight of the jig and bait (or plastic) almost sinks the whole works, leaving just the tip sticking out of the water. If he needs to fine-tune the balance, he pinches small split shot on the line, starting about a foot up from his bait.

He sets the bait so it’s slightly off the bottom, from a few inches to as much as halfway up, depending on where the fish want it. Sometimes, it helps to have bait bouncing on the bottom, right on the beds, especially when ‘gills are defending their beds. With the trap thus set, fish can get the bait in their mouths easily, and even the slightest bites are detectable–just a tiny tug pulls the float under. A lift bite, when the fish rises in the water with the bait in its mouth, is also easily noticeable because the float rises or lays flat. Sensitive float rigs catch bluegills lightly in the lips. Seldom do the fish swallow the hook.

Genz’s rods are made for float fishing. His favorites are 12 feet long, with 8 feet of pool-cue butt section and a 4-foot light or ultralight tip. But 10-footers are easier to find in stores.

“The light tip lets you set the hook without breaking your line,” says Genz, “and the power in the butt lets you lift the fish.”
**
Cover Ground**
Genz fishes the same way on ice or in open water, methodically placing his jig and float near bulrush clumps. Bluegills are aggressive on most days, so it’s not necessary to leave the bait anywhere for long.

“Bulrushes are best,” he explains. “But I also find fish near other weeds, such as grasses that reach above the surface–cover they can actually swim around in.”

In many reservoirs, weeds are hard to find. But if you search areas with sand, gravel, or other firm bottom, in 2 to 6 feet of water, you’ll spot bowl-shaped beds of spawning sunfish.

As summer progresses, shallow beds are often abandoned in favor of new ones made in deeper, cooler water. If you find beds but no fish, look in the area but probe deeper. That’s where the late spawners will set up.