A question asked by land_cruiser_73 in the Answers section has prompted this blog post. His question is one I’ve heard... 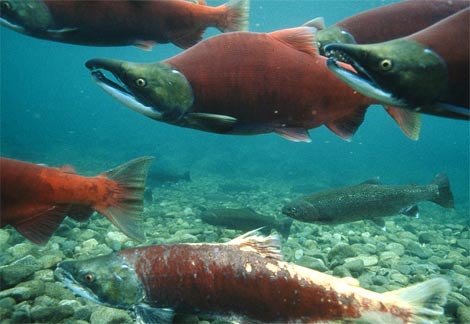 A question asked by land_cruiser_73 in the Answers section has prompted this blog post. His question is one I’ve heard before, or versions there of, but didn’t know the answer to. It was: “I know that fresh salmon is poison to dogs. Is Kokanee salmon also deadly?”

To find the answer, I contacted Ben Character, a great vet I know that has a love for sporting dogs. In fact, he has written a valuable book that I keep close at hand called “Sports Medicine for the Retriever: Caring for the Hunting Retriever.” It’s worth the price of purchase just for the list of over-the-counter drugs and dosages you can give your canine, but is packed with great info and advice for all sporting dog owners–not just retrievers.

Here’s what he had to say about “Salmon Poisoning” in dogs and what you can do to make the fish safe for consumption:

“Actually the name “Salmon Poisoning” is a bit of a misnomer. It’s not the salmon, per se, but a nematode (Nanophyteus salmincola) found in the salmon (most abundant in the organs, but it also can be found in the meat). No, actually that also is also not precise enough. The disease is from a “neorickettsia” (Neorickettsia helminthoeca, bugs similar to Erhlicia and RMSF) that is in the nematode, that is in the fish. Dogs are the only animals that we know of that are susceptible – not cats, bears, people, etc. If you cook or freeze the nematode carrying the rickettsia then the fish is safe for dogs. As far as I know it can be found in any salmon (mainly freshwater and Pacific) and a few other fish sometimes.”

For further reading, Character says you can check out the website found by clicking here.

As you will see, it’s feeding raw salmon that poses the danger. You can cook or freeze the fish to kill the parasites living within it, but beware: freezing must reach satisfactory temperatures and be maintained for a certain number of hours or days (depending upon temperature) in order to be effective.

If exposed to the parasites, and if the dog is left untreated, death usually occurs within 14 days. Symptoms include the usual players: vomiting, diarrhea, loss of apetite, dehydration, fever and weakness, as well as swollen lymph nodes.

The good news is, if caught early and if you can tell your vet that the dog might have been exposed to raw salmon or other fish, it can be treated.