A canine’s ability to detect scent has made it an invaluable tool to man. Federal, state, and local agencies use... 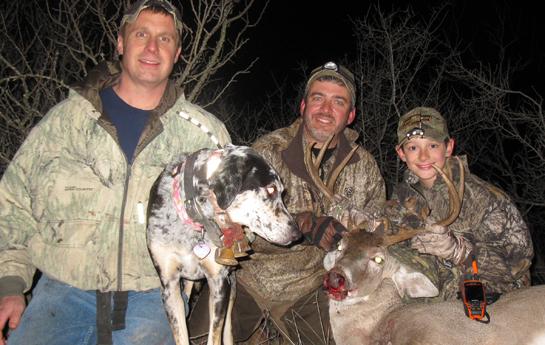 A canine’s ability to detect scent has made it an invaluable tool to man. Federal, state, and local agencies use dogs to detect everything from explosives to contraband. Hunters use them to locate and track game. Dogs are even used to detect diseases such as cancer, or to alert low blood-sugar levels in diabetic humans. So it’s beyond me why some states still don’t allow hunters to use their dogs to legally track a wounded deer.

State agencies say they have many reasons why they won’t allow it: enforcement issues, fear of herd decimation, concern for dogs’ safety, etc. The loophole, however, is that it’s pretty hard to stop someone from walking their leashed dog in the woods. Of course, I’m not condoning breaking state laws … but when it comes to recovering game, you’d think state agencies would be on board with doing everything possible – and that should include using dogs to recover wounded deer in all 50 states. There are too many success stories to ignore it any longer.

Take Alabama’s Carson Yates for instance. The college student is an avid deer hunter that recently shot a nice buck that he taped at about 134 inches. He never would have recovered it without the family’s dog – a Lacy dog which originated in Texas (and was declared the official dog breed of the Lone Star State) as a herding and all around big-game dog (trailing, running trap lines, hunting wild hogs or treeing game).

Yates shot the deer he had been pursuing all season, but by the time he chambered a follow-up shot, the deer had crawled to a nearby strip of woods. Yates finally got into position for a second shot and hit it in the back from 30 yards. He walked up to the buck and at 10 steps shot it again – this time “right in the boiler room.”

“I thought he was dying – he was laying there gargling blood – and I wanted to put another one in him, but I didn’t have another shell so I ran back to my stand to get one,” said Yates. “When I returned, at about 40 yards away, that buck got up and ran off!”

Dumbfounded, Yates left in hopes of the buck bedding down and bleeding out. He returned to the site once again, found blood and began to track it until after dark. He couldn’t find the deer.

He then called his father, who brought Cody, the Lacy dog the family rescued from a kill shelter. When they put the dog on the trail, he worked it and worked it, but eventually lost the track. “We started back over at the beginning and tried again. This time he figured it out and it took him about 15 minutes to find it,” said Yates. “Cody tracked it and when we found them, he was nose to nose with that deer just daring it to run off – it was bedded down in some tall sawgrass…”

While Yates only uses his Lacy dogs to track wounded deer for family and friends – he’s recovered about 10 deer, including one that went 156 inches – others use deer-trailing dogs more professionally.

Ted Gartner, Director of Corporate Communications for Garmin Tri-Tronics, took his son on a Texas deer hunt during the 2011 season – in pursuit of the boy’s first buck. He got it (pictured above).

Only, the deer was wounded and dark was setting in. Gartner turned to a local who owned one heck of a deer dog, and took the opportunity to pair it up with the then-brand-new Garmin Astro to gather some interesting stats and GPS trailing track.

“[My son] actually wounded the deer right at dusk, so we recruited a nearby fellow who had a Catahoula ‘deer dog.’ I’d barely heard of a Catahoula, but it turns out his dog, Belle, had 800 wounded deer recoveries to her credit,” said Gartner.

“I linked up my handheld to her collar, and in about an hour and a half, in the pitch black of night, my son had his deer. The whole thing was easily the single most-gratifying hunt in my life. I couldn’t have scripted it any better, and to have it be your son’s first buck, well, let’s just say there weren’t many dry eyes.”

The Garmin Astro stats of the track:

Now let’s look at just these two dogs and what they’ve accomplished: they have recovered more than 800 deer that would have otherwise likely gone unfound – that would have been wasted, and become coyote feed. Instead, the hunters that paid for the tag took their deer (and didn’t kill another deer because they didn’t recover the first), and enjoyed the bounty, and memories, of the hunt.

When fish and wildlife agencies eagerly cite a hunter for wanton waste if he uses a wild-shot duck to train a better retriever, but won’t allow him to use a dog to trail and recover a wounded deer, they’re missing the bus because of outdated bureaucratic fears and red tape. It’s the height of hypocrisy.