The Ethics of an Antelope Truck Hunt

We rolled out of camp as the sun was rising, just after legal shooting light. I rode shotgun in the... 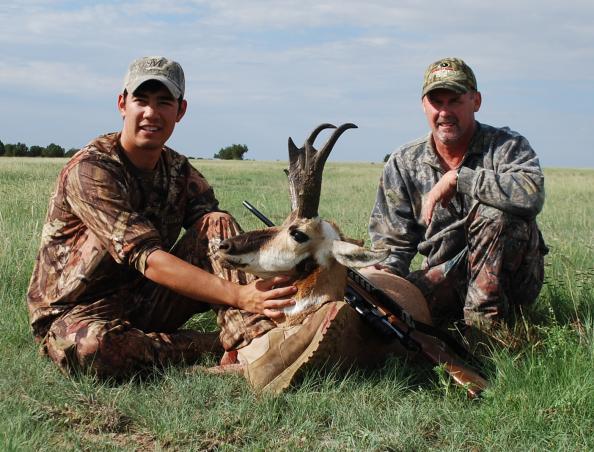 We rolled out of camp as the sun was rising, just after legal shooting light. I rode shotgun in the pickup with my rifle at my side uncased, unloaded, muzzle pointed at the floor. A full magazine waited in my pocket.

Less than 400 yards down a gravel ranch road my guide, Wade Woods, spotted a pronghorn buck skylined on a ridge.

“There’s a nice buck right there,” Wade said excitedly as my hunting partner Philip Miller watched from the back seat (see the video from Philip’s hunt below).

The buck was standing broadside 150 yards away and staring at us. We had been hunting for approximately four minutes.

In an instant my mind fast-forwarded through what I was afraid could happen next. Option 1: Wade would hit the brakes, I’d jump out of the truck, jack in a round and shoot the antelope from the road (totally legal in New Mexico on unpaved ranch roads). Option 2: Wade would slow down enough to let me get out and then keep driving down the road. I’d shoot the buck as it watched the truck drive away.

I proactively went for Option 3. I grabbed the camera that was slung around my neck and leaned in front of Wade. “Could you just stop here for a sec?” I asked.

Torn between wanting to please his hunter and not scare off a good buck, Wade slowed the truck to a crawl while I rushed a couple shots (photos, that is) through the driver’s side window.

“I hate to stop when…” Wade started to say, but it was already too late. The buck got nervous, gave us one last look and then disappeared over the ridge.

I thought: “I didn’t come all the way out here to shoot a pronghorn from the road, five minutes into the hunt.”

Perfect Pronghorn Country
I was in an antelope camp with a handful of other writers and outdoor industry types outside of Clayton, New Mexico, just west of the Texas border. We were set up on a 60,000-acre ranch owned by Sam Britt, an 81-year-old cattleman who raised race horses, served in the Navy as a radar man and has an impressive tolerance for Scotch (think twice before you tell an old cowboy “I’ll just have whatever you’re drinking”).

Britt’s ranch sits on what was once Apache and then Comanche territory. We camped in tepees and investigated old buffalo jumps. The scenery on the ranch was epic: sagebrush mesas rolled out to the horizon and were sliced by deep, steep canyons. Old inactive volcanoes watched from the distance. The land was full of antelope, mule deer, turkeys, elk, coyotes and black bears. We were being guided by Steve Jones’ Backcountry Hunts, which is a truly professional operation with good cooks and better guides.

It was a nearly perfect set up, but there was a hitch. The not-so-secret secret of a lot of antelope hunting in the West is that it’s mostly done by truck. You travel in the truck, glass from the truck and sometimes you shoot only a few yards from the truck.

At first this seemed unsporting to me. “Road hunter” has always been a dirty term in the hunting circles I run in.

But as the morning wore on and we spent more time driving, glassing and stalking, my prejudices began to fade away. I quickly learned that while almost anyone can spot a nice antelope from a truck, it does take some real skill to stalk through the pancake flat terrain within rifle range of one.

I also learned that a mature pronghorn buck and a competent hunter are rather evenly matched. Antelope are naturally curious creatures, and early in the season many bucks will let you stalk within 300 to 400 yards of them — comfortable range for a good rifleman. Antelope top out at about 60 mph, which is significantly faster than you can safely drive a pickup down a bumpy ranch road (our truck was the Ram Outdoorsman, click the link to read more about it). Pronghorns have incredible eyesight and can easily spot trouble from more than three miles away. Give an average hunter a 10X42 bino and he’s suddenly blessed with antelope vision.

A Curious Buck
I thought about this while glassing for the next shooter buck. Then he appeared over a distant hill. The buck stopped at the top of the hill about 1,000 yards away and looked at us. Then he moseyed down another 200 yards and bedded down, looking in our direction, but without concern.

Wade and I grabbed our gear, left the truck and walked straight away from the buck.

“This is where it gets fun,” Wade said, looking as excited as I was.

The plan was to slink down to a draw below the buck that had some waist-high cover. From there we would try to slip within shooting range. We had walked about 300 yards when Wade looked back to see that the buck had gotten up and was circling toward us.

We dashed back to where we started from, got down and watched the curious pronghorn work our way. At 400 yards we put out the shooting sticks, at 300 yards I found him in my scope and at 290 I flipped off the safety.

I sent a 100-grain .243 round clear over the buck’s back. Still curious but slightly more alarmed, the pronghorn kept circling. I jacked in another round, steadied the crosshairs, mentally cussed myself out, took a breath and shot again. This time there was a whhhhackk downrange, but I had hit him too far back. The buck ran a hundred yards and then hunched up.

“OK, we’re going to go low and fast,” Wade said and we took off across the mesa toward the wounded goat. When we got within 100 yards of him, I caught my breath and put him down for good.

He was a beautiful buck with 13-inch horns, high cutters and a nice little kicker.

We snapped some photos, field dressed the buck and hoisted him into the bed of the pickup, hands still shaking from the adrenaline rush. As we rode back to camp I felt a quiet wave of accomplishment, the same satisfied feeling I’ve had after every other hunt I’ve ever been on. 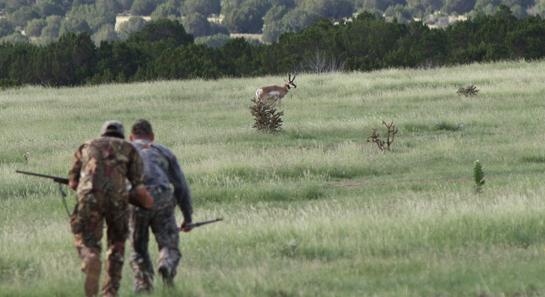