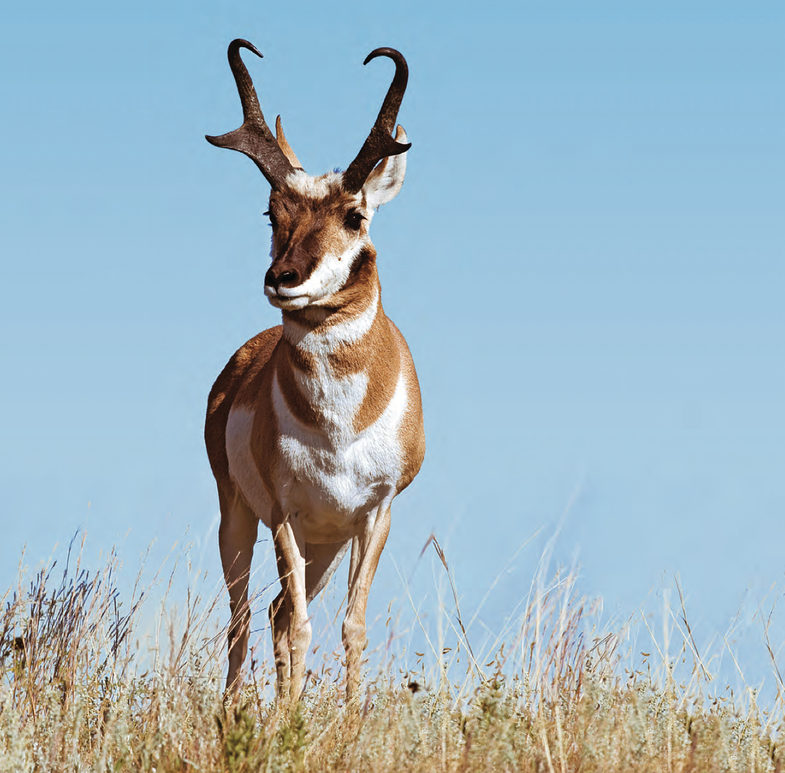 This is an excerpt from Hunting Editor Andrew McKean’s book, How to Hunt Everything, which is available here. Keep an eye out for more species and how to hunt them.

Swift as the prairie wind and handsome as a June afternoon, pronghorn antelope are marvelous creatures. The only member of a family of ungulates that occupies the evolutionary territory between African antelope and European wild goats, a black-faced pronghorn buck is the goal of many a first-time Western hunter. You can’t encounter these “speed goats” and not be impressed by their prodigious eyesight, kinetic velocity, marathoner’s stamina, or ability to live off the continent’s most expansive land: the wide, windy, desolate Great Plains.

For several years in a row, I have gone antelope hunting on the same million acres of Wyoming sagebrush for antelope. My friend Mark and I start at sunup, each toting a rifle and a frame pack. It is an unusual day when we don’t walk at least 10 miles (16 km) and bring back antelope meat to our simple campsite under a lone, stunted cottonwood.

This is the gift of pronghorns, and the reward of antelope hunting. Compared to elk or even deer tags, antelope licenses are relatively inexpensive and easy to draw. In some states, such as Wyoming, you can often buy doe/fawn tags over the counter even after the season starts. Hunter success rates are satisfyingly high, and the weather in September and October is usually fair enough to make camping on the open plains both comfortable and an effective antelope hunting strategy.

What’s more, antelope occupy mainly public land—huge blocks of empty sage and cheatgrass administered by the Bureau of Land Management. Because they are herding animals, where you see one, you’re like to spot dozens—or even hundreds—of the tan-and-white animals. And for selective hunters like Mark and me, it’s great to belly-crawl in on a herd and pick out the best buck. If it’s not one we want to shoot, we back out without ever alarming the hair-wire animals and stride off to find another herd. 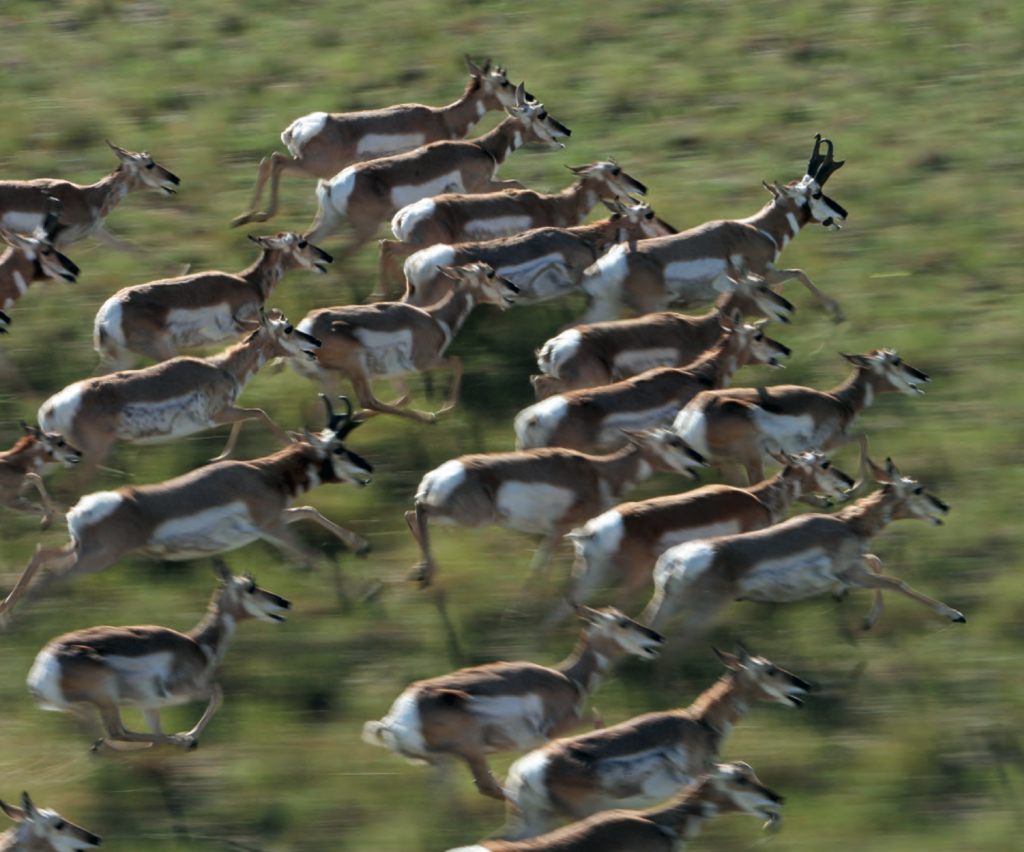 Too many hunters describe antelope as “speed mutton” for their gamy taste. But those hunters ran the pronghorns down, then allowed the carcass to bake under the broiling sun. If you kill a buck that isn’t shot-through with adrenaline, keep the carcass cool, and get the waxy hair off, you’ll find the real trophy of an antelope is its sweet, tender meat—there is no more finely flavored wild flesh.

Many hunters prepare for an antelope safari by working up a long-distance rifle load. Favorite calibers tend toward the light side: .243 Win., .25/06 Rem., .260 Rem. But pronghorns can be effectively killed with well-constructed bullets from a .223 or with lighter bullets from magnum rounds in the 7mm and .30-caliber families.

Besides a rifle capable of long-range precision, you need good optics and bullets with high ballistic coefficients that are relatively unaffected by the nudges of the relentless prairie wind.

The great challenge of pronghorn hunters, however, is not making long-range shots but seeing how close you can get to the wary animals. Use terrain features—dry streambeds, heavy sage stands, and even the rolling hills of the prairie itself—to hide your approach, and then belly-crawl the last few yards until you can set up for a shot. I wear volleyballers’ kneepads and heavy leather gloves for this ambush, since cactus and sharp rocks are abundant.

You can also effectively bowhunt pronghorns. Most archery seasons begin in early September and coincide with the antelope rut. During this window, bucks are abnormally curious but also highly territorial, so decoys imitating young bucks can be especially effective. Hunters typically work in pairs, with one holding a decoy in sight of a lone buck, moving or flashing the decoy up and down while the shooter prepares to make a snap shot at the incoming animal.

One of the biggest challenges of bowhunting antelope is quickly and accurately estimating range. On the prairie, you don’t have trees, bushes, or fenceposts for reference, and most archers tend to shoot over antelope, thinking that the small-framed animals are farther away than they actually are. 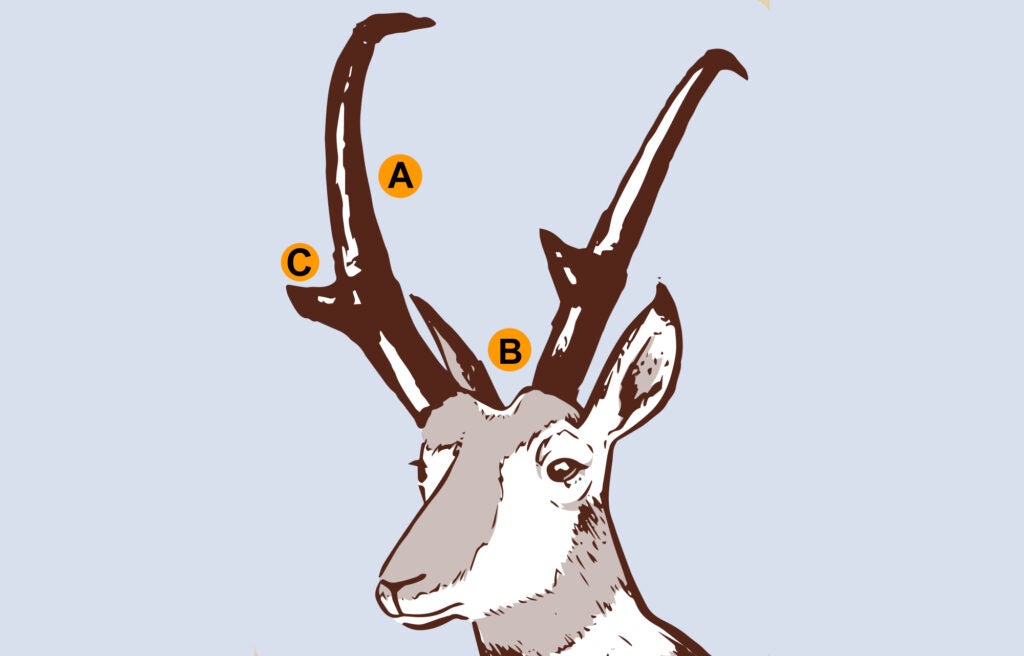 HOW TO FIELD JUDGE A PRONGHORN

Pronghorn bucks can be notoriously hard to judge in the field. Horn length, mass, and depth of the prong—or the triangle that juts off the horn about halfway up its length—all contribute to what constitutes a trophy buck.

[A] Length
Horns that reach 16 inches (40 cm) in total length are the threshold for trophy status. A buck’s ears measure just under 6 inches (15 cm) in length. Determine where the tip of the ear meets the horn and then visually double that length. If the rest of the horn exceeds that 12-inch (30-cm) mark, pay attention, especially if the horn curves deeply.

[B] Mass
You want to find a buck whose horn bases are at least as massive as the circumference of his ear. And you should make sure that mass is sustained up the horn, well past the prong.

[C] Prong
A buck whose prong, or cutter, juts forward or sideways at least twice the width of the horn is a trophy, especially if you detect cupping of the prong. The cutter should project from the horn at least above the height of the ear, and remember: the higher the prong, the better scoring the buck. 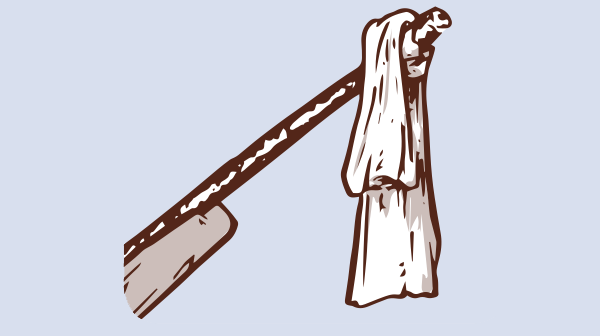 HOW TO FLAG AN ANTELOPE
For a short window in the fall—late September through mid-October—you can kill a pronghorn with a handkerchief.

This practice appeals to their curiosity, territoriality, and herd dominance. Just wave the fabric until you get his attention, then lower your flag, and periodically raise and lower it to keep him interested and coming toward you. I have my best luck tying a hanky (or white T-shirt) to the barrel of my gun and raising the muzzle; I can get the buck’s attention without showing myself.

1. Horns vs. antlers
Antelope have neither permanent horns nor annually shed antlers. Instead, they have something in between: a hard sheath made of hair that sheds each fall and a permanent blood-filled core that sprouts the new horn each spring.

2. Behavior in wind
When the wind kicks up on the plains, antelope become especially skittish. That’s probably because the relentless wind dries out their eyes, impairing their prodigious sight. If you can wait for the wind to die down, you can expect antelope to become slightly calmer, if no less eagle-eyed.

3. Signal hair
Pronghorns have specialized hair on their rumps that flares when they sense danger. This white hair can shine like a tin pan, and the flash signals to other members of the herd that danger is nigh.

4. Sensing a link
While pronghorns are apparently unrelated to the true antelope of Africa, one curiosity links them. The hollow hair of freshly killed American pronghorns and the common springbuck of southern Africa smell almost the same: exactly like sweet, dry corn husks.