The 11 Best Hunts of Summer 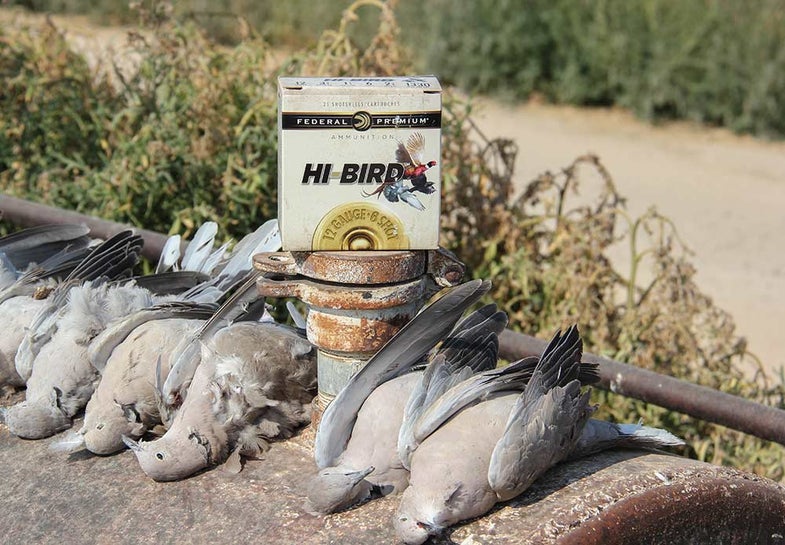 If you ever wondered why layout blinds are sometimes called coffin blinds, spend some time inside one under the midday August sun. I did just that in Utah last summer. The cool of the desert morning turned to intense heat by 10 a.m. as heat mirages rose off the distant wheat stubble.

Why would I willingly subject myself to such conditions? Because the only thing hotter than the inside of that coffin blind was the pigeon shooting. I was hunting with the pigeon master himself, Neal Hunt of Soar No More decoys, and when the birds are coming in as steadily and as quickly as they were that day to Neal’s decoy spread, there’s very little time to worry about the heat, (or if your deodorant has given out). We shot volley after volley at decoying pigeons until our gun barrels were red hot. It is the closest thing America has to high-volume wingshooting, and summer is prime time to hunt these birds.

If you’re a passionate hunter, life’s too short to spend three months of every year sitting in front of an air conditioner and dreaming of fall. Don’t let the dog days of summer get you down. Here are 11 great hot-weather hunts for June, July and August. 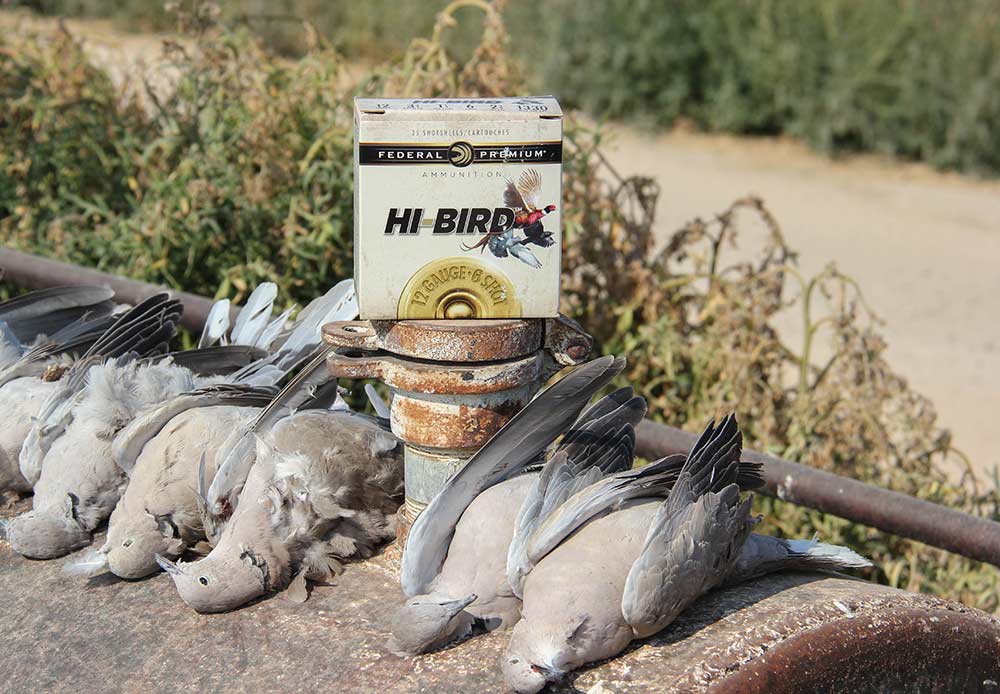 Collared doves were first released in the Bahamas in 1974 and eventually found their way to the mainland United States. These birds have spread across the country, and since they are an invasive species most states have very liberal (or no) bag limits or closed seasons. And, just like their cousin the mourning dove, collared doves make excellent table fare. Concentrate your efforts around agricultural fields especially after harvest since collared doves regularly feed on waste grain. It’s critically important that dove hunters learn to distinguish collared from mourning doves, though. You can see where collared doves have spread here and learn how to identify them here. 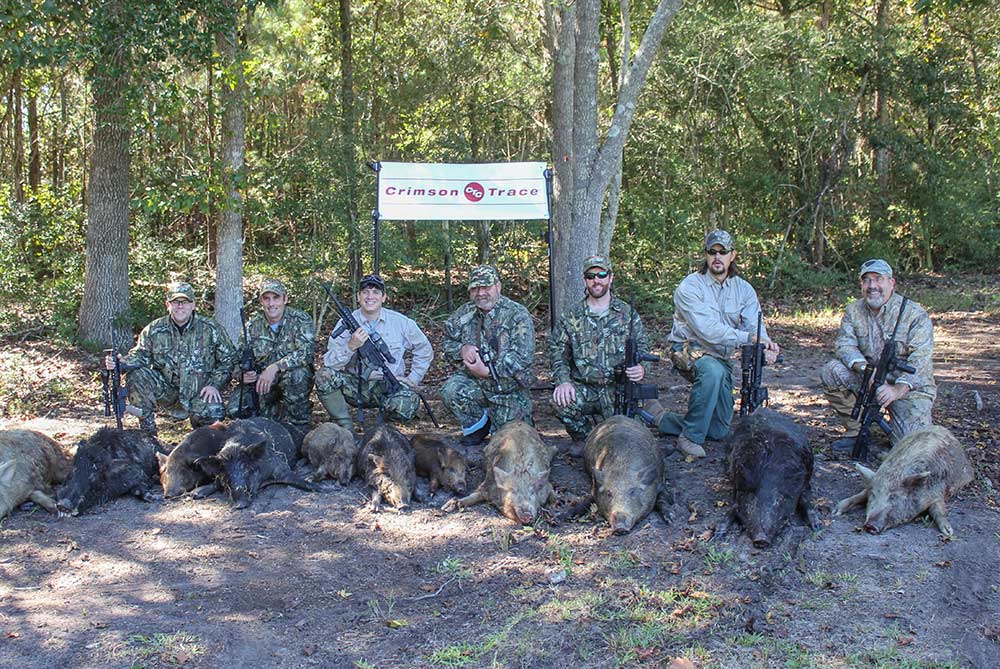 The author and his crew of hog-hunting buddies.

Feral hogs were first introduced to the United States by Hernando De Soto and his conquistadors when they trekked overland through what is now Florida, Georgia, Tennessee, and Arkansas. Today there are an estimated 5 million wild hogs in the United States that cause over a billion dollars of damage to agricultural crops each year. In the southern U.S. hogs do the most damage to rice fields, so concentrate your efforts there from sunset to sunrise. FLIR’s new PTS-223 is a superb thermal sight option for your rifle that allows you to hunt pigs in total darkness. 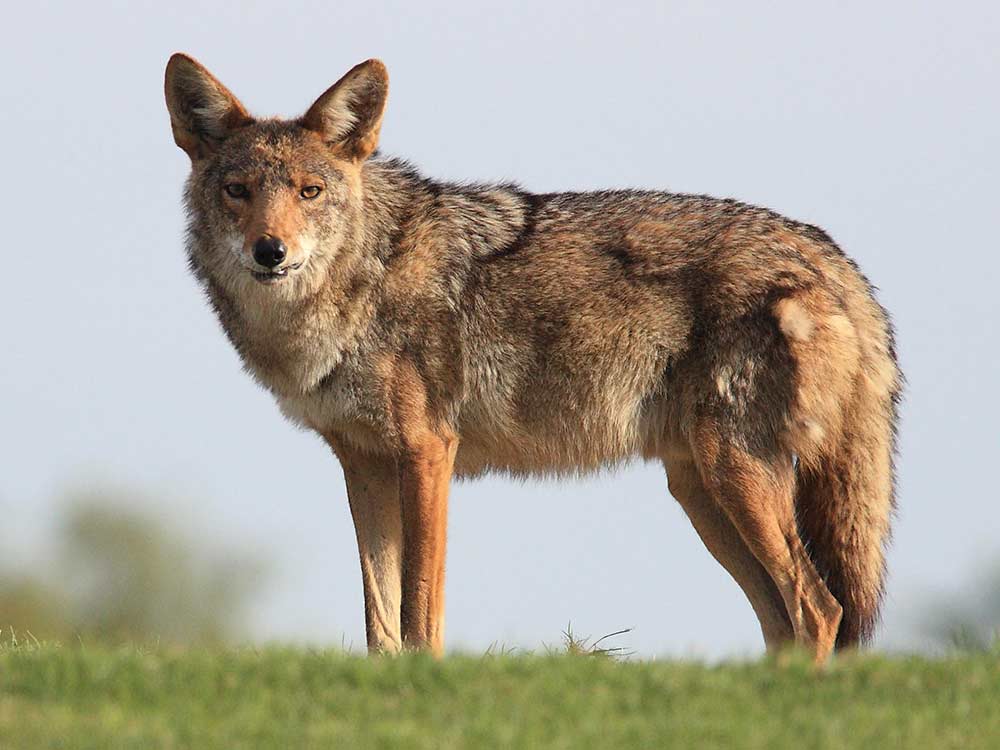 During the summer months, coyotes take a toll on fawns so coyote hunting is a critical component of any whitetail deer management plan. Coyotes are particularly tuned-in to fawn bleats early in the summer as well as canine distress calls. The thick growth of summer means dogs will likely approach more closely than they would in late winter when there’s less vegetation so shotguns with tight chokes and heavy magnum loads are a great option this time of year. 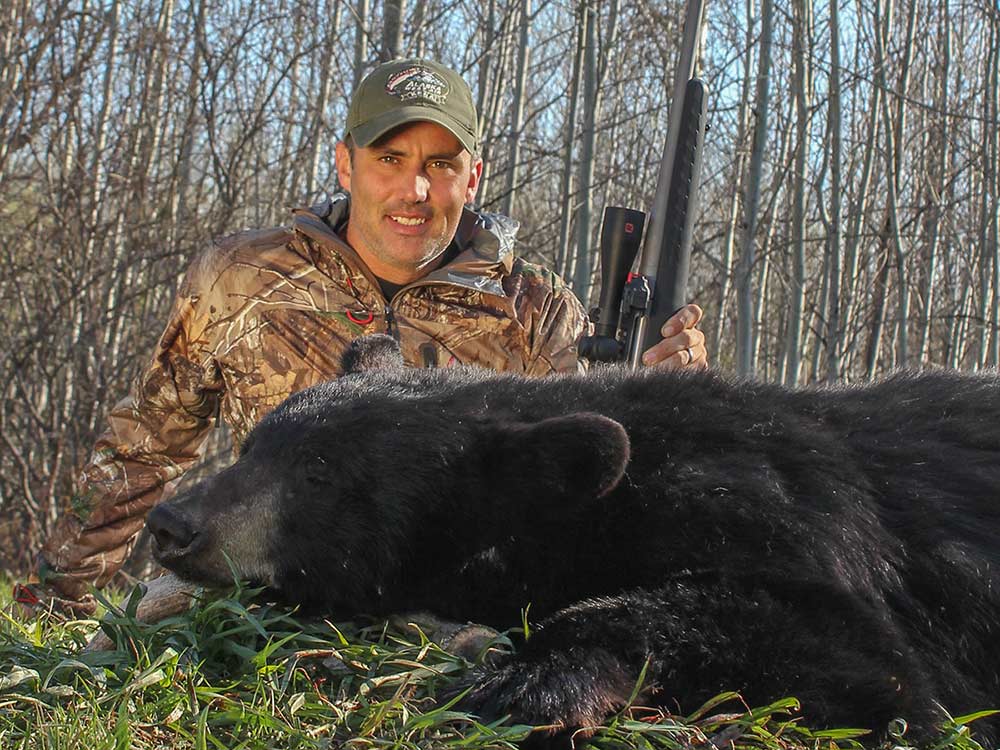 The author on a black bear hunt.

You can chase spring bears through June in some parts of Idaho, and with so much public ground the Gem State is an ideal location for your late-spring bear hunt. Hound hunting is legal there, too, but be prepared to hike through some very steep country and, at the higher elevations, you’ll still encounter snow. Neighboring Washington’s black bear season opens on August 1 in some units, though hound hunting is not allowed. 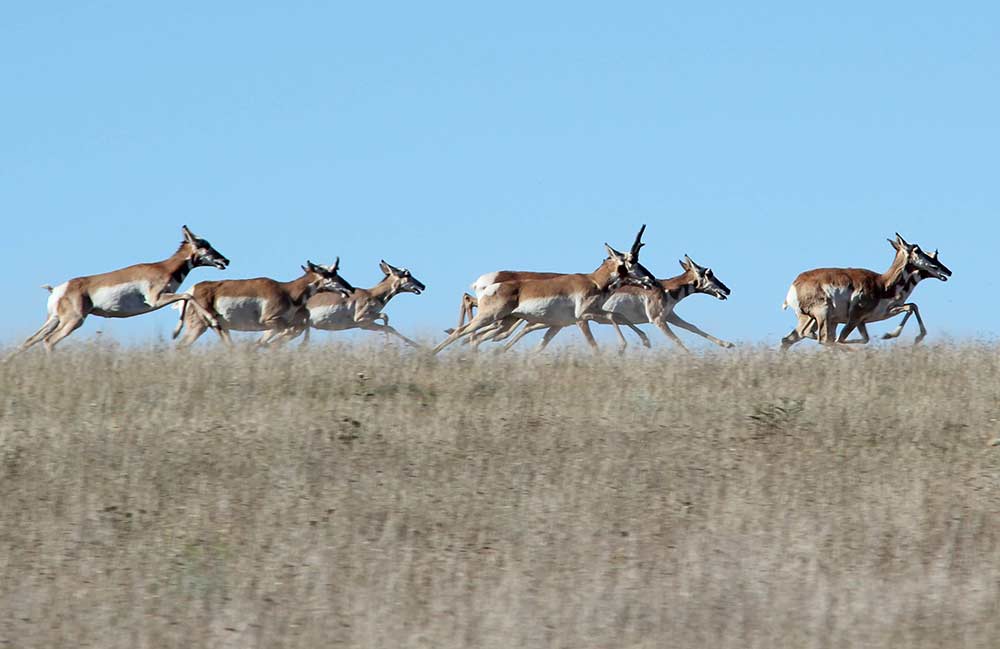 Pronghorn on the move.

The wide-open spaces of the American West are home to America’s fastest ungulate, the pronghorn. Wyoming is the pronghorn capital of the world, and the season opens in certain areas on August 15. Rifle hunters can employ spot-and-stalk tactics but bowhunters will likely need to concentrate their efforts around water sources or, if you’re so inclined, stalk animals behind a decoy. Despite what detractors tell you antelope venison is excellent when handled and prepared properly. 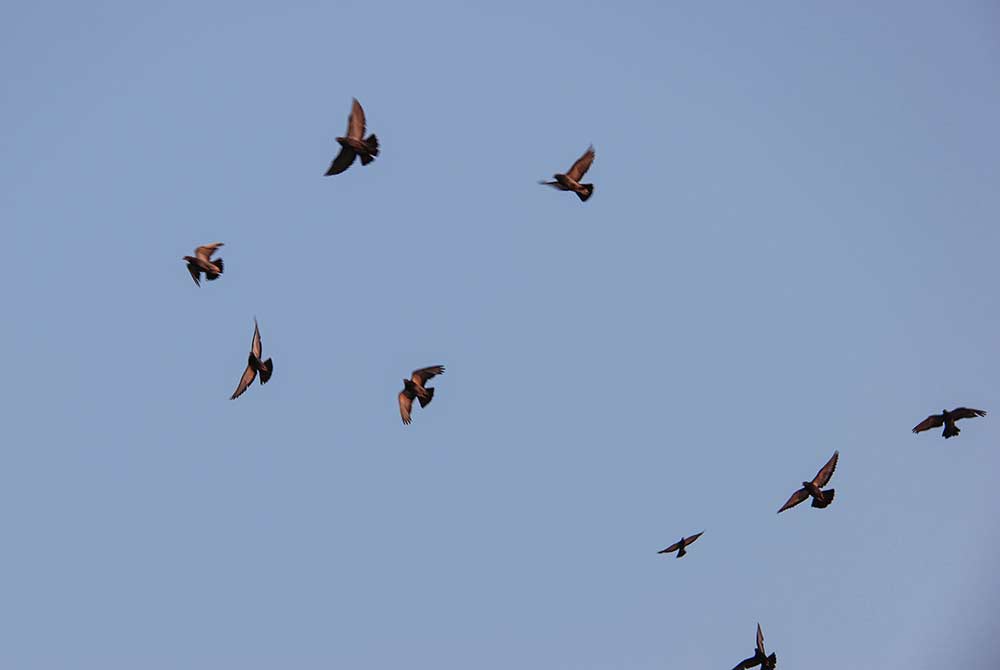 A flock of summer pigeons.

Like the aforementioned collared dove, wild pigeons are members of the Columbidae family and are delicious, especially birds from agricultural areas where they subsist on a steady diet of grains. Pigeons will come to decoys, so if you simply can’t wait for the early-fall goose season to tuck into a layout blind and bust some birds, pigeon hunting is a low-cost, widely-accessible alternative. In most states there are no season dates or bag limits on feral pigeons, and farmers are usually thrilled to have pigeon hunters on their property since the birds cause so much damage to machinery and barns. 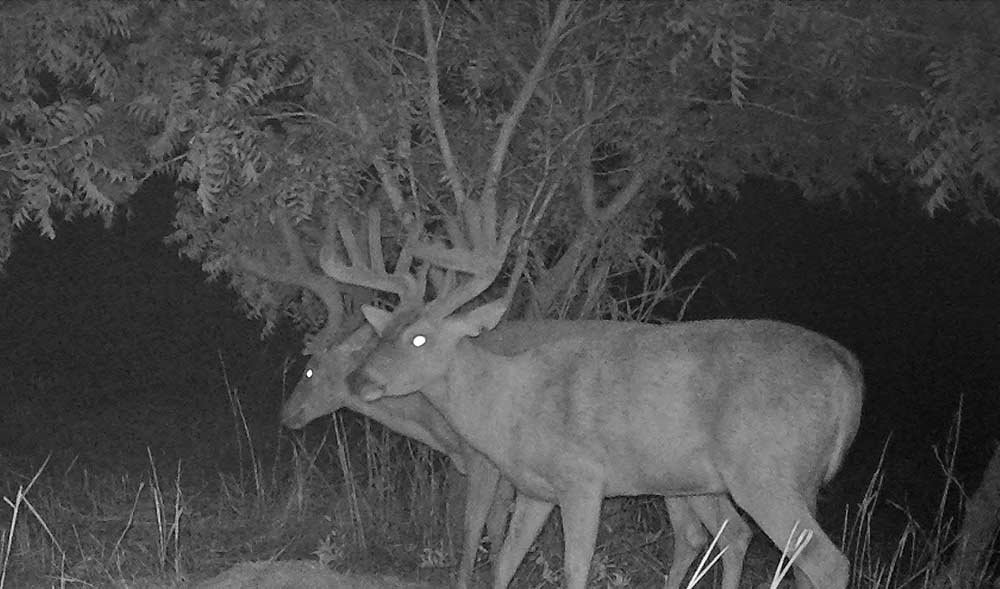 A pair of velvet bucks.

A whitetail buck in velvet is the trophy of a lifetime for many hunters, and there are a few states that are open to hunters in late summer. South Carolina is the most popular destination for those looking for a buck in velvet, but Tennessee now offers a chance to hunt deer in late August as well. If you’ve already cleared out your freezer after last fall’s hunt, here’s a chance to procure more protein until the season opens in your home state. 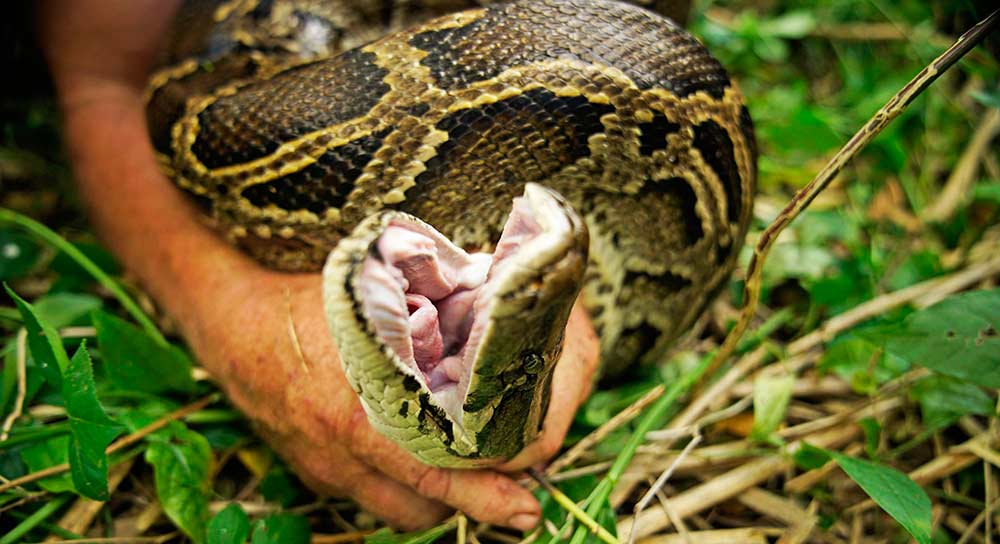 Florida has a serious problem with introduced Burmese pythons and the state is asking hunters to come and help capture these massive reptiles. The dense, overgrown country around the Everglades is perfect habitat for these snakes which regularly reach lengths over 15-feet.

But, wrangling a python in tall grass is not an adventure for the faint of heart. If you’re successful, though, these snakes provide an awesome snake-skin trophy and even meat for the frying pan (though the biggest snakes can have high mercury levels, so chowing down on 50 pounds of python is not advised). 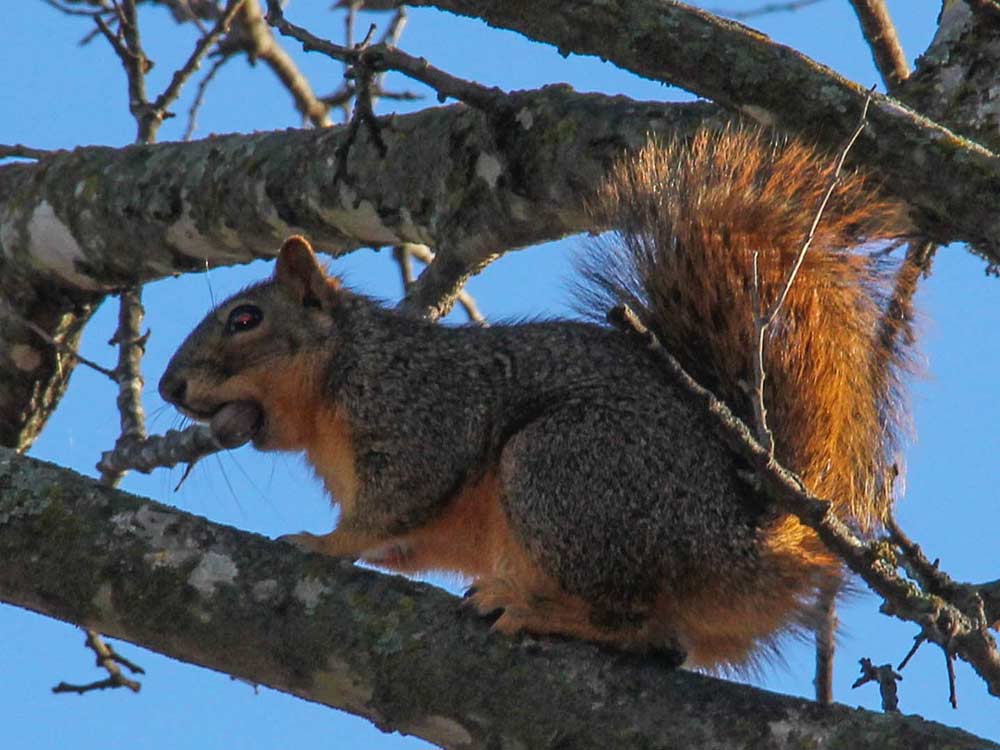 Many states like Missouri offers lengthy squirrel seasons and that means you can pursue these animals all summer long. Squirrel hunting is traditionally a sit-and-wait affair, but if you have a chance to follow a well-trained squirrel-hunting cur through the hardwoods, it’s an experience you won’t soon forget. Most hunters carry a .22 rifle or pistol for squirrels, but if you’re hunting around urban areas and want to keep noise to a minimum, modern air rifles are certainly up to the task. There are many classic squirrel recipes including my personal favorite—fried squirrel with biscuits and gravy.

When a murder of crows blackens the sky you’re in for some fast-paced shooting action. Crows are members of the Corvidae family (which also includes ravens, jays, and magpies) and respond very well to calls and decoys. They offer excellent off-season practice for waterfowl hunters and reducing their numbers helps mitigate the negative effects they have on populations of nesting birds like quail. Don’t underestimate these birds; crows are clever and wary and if they smell a rat they’ll turn tail and disappear before the first shot is fired. Hide your face, hunker down in available cover, and hold still as they approach. Believe it or not, you can eat crow, too (find the recipe here). And as always, make sure to check your local regs for crow hunting season dates.

Read Next: The 10 North American Hunts You Must Have on Your Bucket List 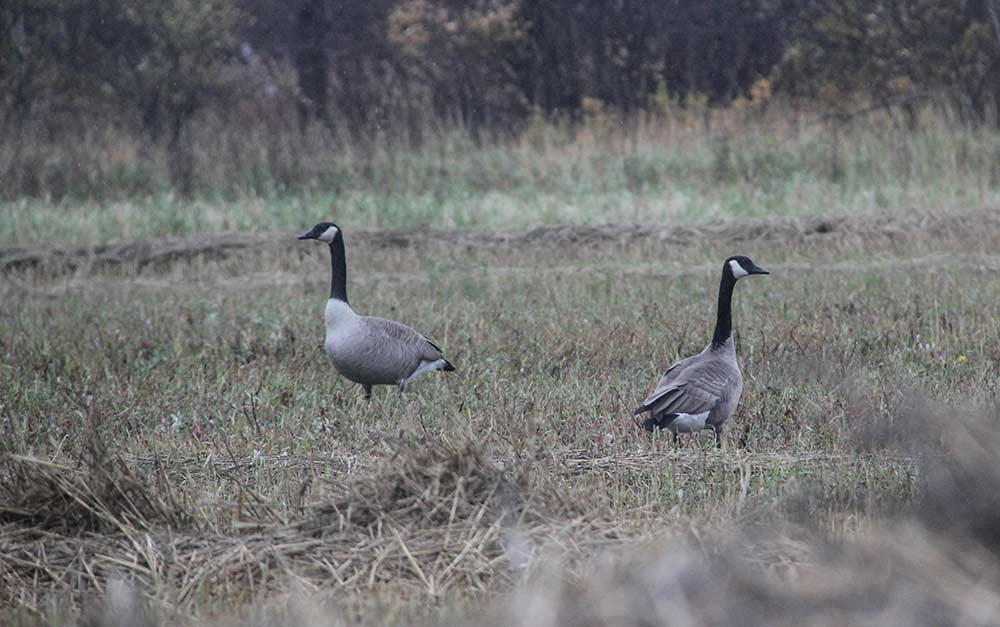 Once you have summer geese patterned, you’re in for an epic hunt.

Some states like North Dakota offer an early Canada goose season that begins in mid-August. This is a great opportunity to get a jump on the year’s waterfowl season and, in productive areas, you’ll limit on geese quickly. Early-season birds aren’t as call-shy as they will be later in the year, but it takes some serious scouting to pattern these local birds. Early seasons usually offer higher bag limits than the regular season (North Dakota traditionally has a bag limit of 15) so a few successful days in the field will produce enough meat for a fall supply of delicious goose jerky.