Some bear hunters go well beyond doughnuts and a bucket of lard to bring in hungry bears—they go into the... 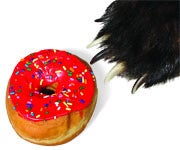 Some bear hunters go well beyond doughnuts and a bucket of lard to bring in hungry bears—they go into the realm of the truly stinky, the fishy, and the, ah, snack food.

For the latter, think popcorn. One Alaska bear hunter pops up a 55-gallon drum of popcorn—using a turkey deep fryer, no less—then coats it with a mixture of butter, sugar, water, and powdered cherry Kool-Aid. Not only do the bears love it, but it’s fairly light to carry in to remote bait sites.

Other bear hunters attract bruins with everything from buckets of week-old carp to mesh bags of split chubs hung in the trees above their bait stations. Maine hunter Steve Vose likes to do a smoky, fishy “burn.” He pours the oil from four sardine tins into a small soup can, adds a plump sardine or two, and sets the can on a lit Sterno burner. The resulting smoke “really stinks, and will pull in bears from a long ways off,” Vose says.

Nova Scotia hunter Brian Parlee collects used fryer oil from local restaurants, using it to soak the ground in a large circle around his bait station.

“The oil on the ground serves two purposes,” says Parlee. “It gives the scent more area to evaporate from. And when the bears come in and then leave, the scent on the bottoms of their paws leaves a trail for other bears to follow.”

Many Canadian outfitters use the putrid remains of deer taken the previous fall, kept “sweet” in 55-gallon oil drums submerged in frozen creeks.

Bears love sweets, but they can be selective. Vose uses a couple of pounds of long, red Twizzlers on his bait piles, and the bears gobble them up as fast as he sets them out.

“They eat up all of the Twizzlers and often don’t even touch the doughnuts,” says Vose. He has experimented with black licorice, made with aromatic anise, which bears are supposed to crave. “The bears don’t seem to like the black ones,” he observes. “They just want the red ones!”