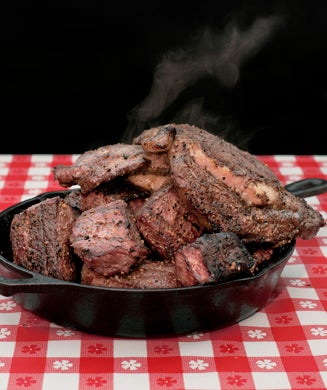 With beef prices expected to rise this year, and the brief stretch of meat shortages we saw in grocery stores last year, a lot of folks are taking more interest in venison as their primary red meat. And this trend had been happening well before COVID-19 as health-conscious consumers from Seattle to Brooklyn were demanding “grass fed” and “free range” fare.

The flaws in beef supply only seem to highlight the qualities of venison. With the latest (and strongest) trend in dining being all about eating organically and locally, there should be no meat trendier than deer right now. Not to mention that the whitetail deer population, approximately 15 million in the U.S., has never been larger than it is today.

As hunters, we like to brag about the qualities of wild venison: “Most people can’t even tell the difference between a beef steak and a venison steak;” “It’s way healthier than beef is;” “I haven’t bought beef from a grocery store in years;” and on we go.

But in the venison vs beef debate, is eating wild venison truly better than eating beef? Or is that just something we say when we feel the need to justify killing deer? I conducted an objective (and partially subjective) investigation to find out.

This one is pretty straightforward. Deer are leaner and wilder animals than cattle. Venison—even taken from a slob, cornfed buck in the Midwest—has less fat than beef does. Three ounces of lean beef contain, 247 calories and 15 grams of total fat. Three ounces of venison contain 134 calories and only 3 grams of total fat. Most importantly, venison contains about one sixth the amount of saturated fat that beef does. Venison has more protein: 26 grams to 23 grams in beef. The only category in which venison loses is cholesterol: 95 mg to 76 mg in beef, according to Livestrong.com.

Venison also has more vitamins and minerals per serving than beef does. It has advantages in iron, vitamin B6, niacin, and riboflavin.

But there is a wild card in this debate: a compound called L-carnitine, which is found in venison, beef, seafood, lamb, and dairy. A recent study published in the journal of Nature Medicine found “significant dose-dependent associations” between levels of L-carnitine and the risk of heart disease. Bacteria in the human stomach breaks down this compound to produce trimethylamine N-oxide (TMAO) which prior research has linked to heart and artery damage. Venison has a slightly higher level of L-carnitine than beef does, but this research is still very new and ongoing. Advantage: Venison

To tackle the most subjective category, I conducted a blind taste test pitting backstraps and steaks from a 2 1/2-year-old Catskill Mountains buck against ribeye steaks bought from the best butcher shop in south Brooklyn. Ten friends with discriminating palates served as the test panel. Both beef and venison were seasoned evenly and cooked on a charcoal grill to medium rare. The meat was cut to bite-size portions and served on color-coordinated toothpicks (white for venison, black for beef). Venison crushed beef 8 to 2.

Venison just might be experiencing its glory days in the culinary world. It has a rich flavor (don’t call it gamy) that hunters have appreciated forever and foodies have finally seemed to discover.

Even though I was raised on venison, I personally would still take a thick ribeye or T-bone over a whitetail tenderloin when given the option.

However, the test panel has spoken. Advantage: Venison

How Much Does Venison Cost?

The cost of beef is on the rise and it’s always changing due to farming conditions. Years ago, an epic two-year drought in Texas had ranchers struggling to keep their cattle grazing while drought across the Great Plains drove feed prices sky high. Retail beef prices have risen on average by about $1 per pound since 2007.

In February 2021, USDA choice steak and sirloin had a national average retail cost of $9.08 per pound, with more expected increases on the way. Ground chuck cost a national average of $4.25 per pound retail, according to the Bureau of Labor Statistics.

But how much does wild venison really cost? It’s impossible calculate a perfect figure. The farmer who shoots three deer off the back 80 acres spends significantly less money than the nonresident hunter who flies to Kansas for an outfitted hunt.

But we can at least get a close estimate…

The average cost of a deer hunting license is about $21 across the top 10 whitetail states in the country. But a lot more goes in to the cost of venison than license fees. A 2006 survey conducted by the U.S. Fish and Wildlife Service found that deer hunters spent $885 per year on hunting and trip expenditures. The survey also found that only about 50 percent of the deer hunters across the country killed one or more deer in a season. This isn’t perfect math, but we can figure that deer hunters take an animal about every other year. This means it would cost $1,770 per animal. Factor in about 60 pounds of venison per deer and you get $29.50 per pound. Even if you take a deer every season, the cost per pound still runs $14.75. Advantage: Beef

Venison taken from a healthy deer that has been field dressed and butchered properly might be the safest red meat on the planet. But there are still some diseases and bacteria you need to be aware of. The two most publicized safety concerns with venison are chronic wasting disease and bovine tuberculosis.

CWD has been found in at least 25 states, but according to the U.S. Centers for Disease Control and Prevention, there has never been a documented case of a human contracting CWD from a deer. However, the CDC recommends not eating deer that test positive for the disease.

It’s possible for a human to contract bovine tuberculosis through venison consumption but it hasn’t happened yet, says Dr. David Wolfgang, a whitetail health specialist from Penn State University.

Bovine tuberculosis has been found in deer herds in Michigan and can be identified by white spots or abscesses on the lungs.

Wild deer can get all kinds of diseases and parasites (from Lyme disease to worms) but none can be transmitted to humans through consumption. The real safety concern for venison is if bacteria from the stomach, intestines, or anus is spread to the meat during the gutting or butchering process. If this bacteria is spread and the meat is not cooked properly, it’s possible to get E. coli, Wolfgang says. If you butcher and cook your own meat, you can eliminate this risk.

Beef has it’s own host of safety concerns, but if processed correctly, it’s perfectly safe too.

“A healthy steer in a feed lot does not bring any more baggage with it than any other animal,” Wolfgang says.

The catch is that you just never know what you’re getting with commercially processed meat. In April, Louisiana-based Manda Meat Packing Company recalled 468,000 pounds of meat (including roast beef, turkey breast, and corned beef) because of possible bacterial contamination. In January, investigators found that 37 percent of beef burgers sampled in Europe tested positive for horse DNA. Some burgers contained 100 percent horse meat (while this isn’t a health concern it shows the sometimes shady nature of commercially processed beef). A recent study by the Center for Science in Public Interest monitored all of the documented food poisoning cases caused by meat in the U.S. over the last 12 years. Rearchers tracked outbreaks in bacteria like E. coli and salmonella and found that chicken and ground beef were the ‘riskiest meats’ to eat among all commercial meats. Ground beef accounted for 336 illness outbreaks and caused more than 3,800 people to get sick, according to the study.

This is only a glimpse at a long history of illnesses stemming from bad beef processing practices. The worst case in recent history occurred in 1993 when four children died and 700 people became sick from E. coli after eating undercooked hamburgers from Jack in the Box restaurants. Advantage: Venison

Wild venison is the ultimate red meat. It’s healthier, tastes better, and is safer than any meat you can buy in a store. It’s also the more ethical choice. Beef cattle all meet the same destiny, but deer are hunted and killed in their own environment, where the smartest and luckiest animals survive and reproduce. It’s the predator-prey relationship as it has been for millions of years.