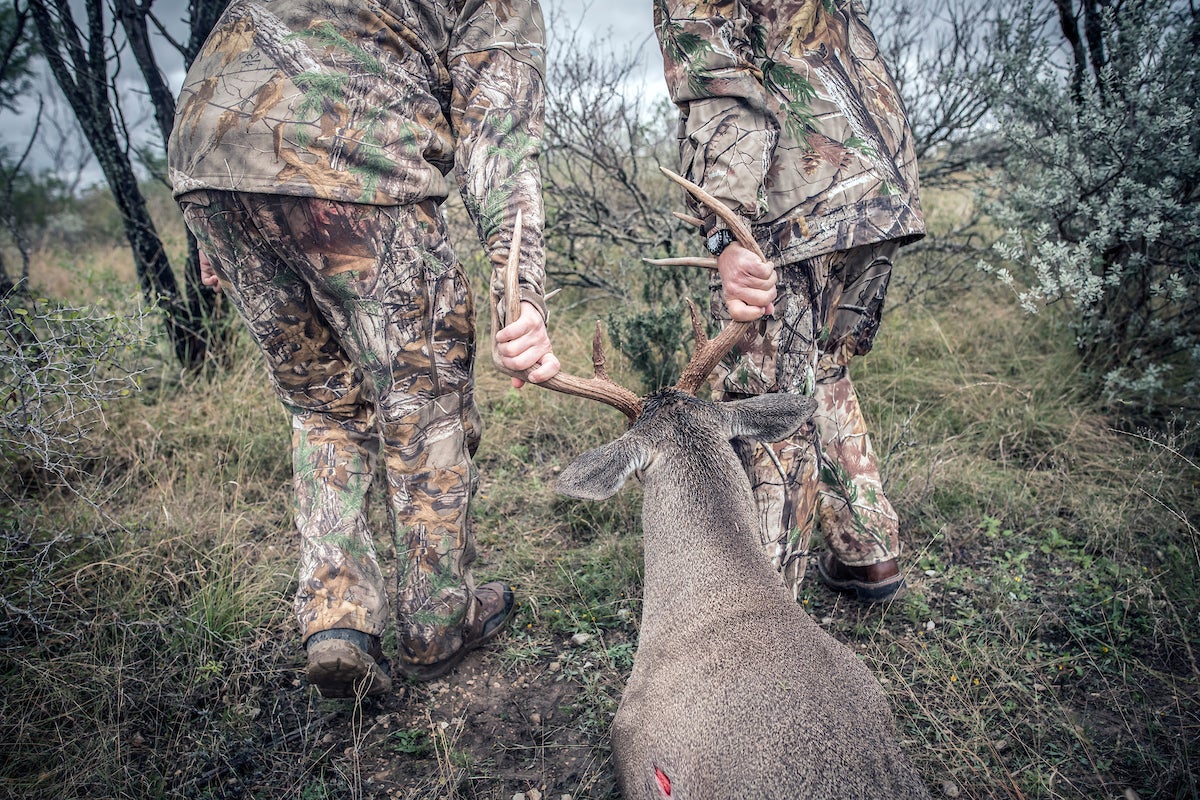 How you handle your venison after the shot makes a huge difference in taste. John Hafner

No, venison from mature bucks doesn’t have to taste bad. But, venison from an old brawler buck killed during the tail-end of the rut is a different story. Here’s why

DO MATURE RUTTING BUCKS taste worse than those shot outside the rut? It seems like every deer hunter has their story of a trophy buck that made for a great mount but terrible eats. Some hunters swear up and down that rutting bucks just taste “rancid.” But is that simply deer hunting lore, or is it true that mature bucks killed during the rut taste “off.” I’m not one for clickbait, so, in short: Yes, venison from a rutting buck generally does taste worse. But why exactly? The reasons may surprise you. And there are some things you should know about minimizing that “rutty” venison flavor.

A 1992 New Zealand study titled “Seasonal variation in venison quality of mature, farmed red deer stags in New Zealand” explained the effects of season (including before, during, and after the rut) on venison quality. To summarize: stags slaughtered right after the rut had 25 percent to 30 percent less body weight, and their steaks were far less tender.

Wild game chef Hank Shaw, author of the award-winning blog Hunter Angler Gardner Cook” and a handful of cookbooks including his latest, Hook, Line, and Supper: New Techniques and Master Recipes for Everything Caught in Lakes, Rivers and Streams, and at Sea, goes so far as to not shoot rutty bucks at all. However, he has butchered and cooked his share of rutty bucks through the years. According to Shaw, when the buck is killed and how hard he’s rutting make all the difference in how the venison tastes. Every day the rut goes on, bucks are going to be in worse shape.

“If it’s a buck that had any chance of mating—any deer in the game—at the end of the rut, he will be tired, stressed, or might have a wound he’s dealing with,” Shaw said. As mentioned above, the buck won’t have much fat because they worked it off (and we all know fat equals flavor). They experience a flush of hormones, a little bit like one feels after running a marathon, he said.

“Their whole system is just tired and that does not make good eats,” said Shaw. “A really good equivalent would be steelhead trout. Most survive spawning season, but they beat the hell out of each other.”

Conclusion: Mature bucks that have fought, chased, and bred their way through the rut, generally do not taste as good.

A younger buck that has been run off by bigger, badder bucks and didn’t spend the rut fighting and traveling countless miles to mate will taste better than a more dominant rutting buck.

“If I have to hunt a buck and I know it’s the tail-end of the rut … don’t get me wrong—I will shoot a giant buck, but I’m going to grind most of the meat,” Shaw said. “But if I’m shooting for the table, I’m going to shoot a much younger buck. The youngest rag horn or forked horn, he’s going to be a much better [tasting] than that Hartford deer.”

Testosterone also likely plays a factor. Testosterone levels increase in a buck as he progresses through the breeding season and max out at peak rut. Testosterone raises muscle pH. The Iowa Agriculture Literacy Foundation studied this as means to fully examine why castration is necessary in male cattle and determined a higher muscle pH adversely affected taste. A similar study was  published by the International Journal of Agriculture and Biology titled “Effects of Seasonal Castration on Elk Deer Venison Quality” which concluded “Castration affected the meat composition likely by limiting testosterone production, which might improve the meat quality.” So, we can assume that when bucks are at their highest levels of testosterone during the rut, that will negatively affect both taste and texture of the venison.

How You Handle the Venison Makes a Difference

But science aside, there may be several other reasons your trophy buck doesn’t taste good. The buck is in the shape that it’s in due to the stage of the rut, yes, but the moment you squeeze the trigger and what you do with that buck afterward will also impact flavor.

It starts with shot placement. There are a couple reasons you want precise shot placement to drop the deer as quickly as possible. One, an quick ethical kill is your responsibility as a hunter. Secondly, an improperly bled deer leads to blood splash, as their blood pressure rises and causes blood capillaries to burst and leak into meat. Thirdly, a deer that requires hours to expire before you can begin tracking (or perhaps it expired quickly but you waited to track) can start to experience bone sour. The onset of rot is creeping closer and the meat may even begin to stink. Shaw covers this in-depth in his book Buck, Buck, Moose, but the basic principal is this: You want to bring down the temp of your buck from 100-104 degrees Fahrenheit to 80 degrees within the first hour to make certain you avoid an explosion of bacteria.

Safe to say: The bigger a buck is, the more likely that buck fever kicks in. When this happens, shooting accuracy declines and bucks are hit with marginal shots. Plus, when bucks are on the move during the rut, shots get rushed.

Then there are some hunters who will spend more time taking trophy photos than taking care of the meat. Yes, we all like to think the era of driving around town with a buck strapped to your hood are over, but in the age of social media, some hunters spend an inordinate amount of time taking photos of their trophy buck (driving it to different locations or leaving the guts in and the hide on for way too long). This takes valuable time, and depending on outside temperature, it can potentially lead to sour-tasting meat.

Next, there is the issue of tarsal glands (the dark patches on the rear legs of a buck, below the knee joint). Bucks always have them, but during the rut, they’re more active and smelly. If you’re not careful when skinning and butchering, secretions from those glands can taint your meat. Don’t cut through these glands and don’t touch them and then touch the meat. Some hunters go as far as to remove lower sections of legs prior to butchering or they make certain to use a different knife and gloves when handling the hindquarter legs where the tarsal glands are located.

Perhaps after reading all these mishandling situations, you say, “Jack, I am always careful with shot placement and skinning but the venison from my buck still tastes funky.” To this I must ask: “But do you take your deer to a processor?”

When handing your buck off to a processor, you are at their mercy. Most processors will admit: ground meat is ground meat. Your deer just goes into the mix. The ground you get back might not be your buck at all. Other processors do their best to remain incredibly diligent and make sure every roast and cut you get back is 100 percent your deer. But many of us have that story where we know for certain that the venison we got back wasn’t from our deer. All this to say: When working with a processor, there is the chance you get back game that was mishandled by someone else. Not every hunter out there is as careful and thorough as yourself.

Myth busted: Bucks do eat during the rut. They just don’t eat as much. Brad Fitzpatrick covered this among other myths in his “Deer Hunting: 8 Myths Busted.” But what a buck eats matters immensely. Yes, they may lose 25 percent to 30 percent of their body weight, much of that being fat, but the fat that remains will color the meat’s flavor.

Seth and Scott Perkins, known as The Bearded Butchers on YouTube, have been killing and processing their own game since they were kids. “Location matters,” said Scott. “If the diet is crop-based versus woods-based… Deer we shoot in Wayne County (heavy agriculture) versus Monroe County (very low agriculture) taste differently. I’m convinced diet is the biggest contributor to taste [for a rutting buck]. We find this with cattle too.”

My friend Mark Norquist, founder of Modern Carnivore, lives in Minnesota where two distinct zones for deer hunting exist: a rifle zone in the Northwoods and a shotgun zone among sprawling farmland. The bucks shot up north, they call those “swamp bucks,” while bucks killed in the shotgun zone are considered much better eating.

From my personal experience, deer here in south-central Kansas have a wide menu of corn and soybean fields. I can see it in the color of their fat. As a result, they taste better than deer I have processed in, for example, northeast Washington state.

Long story short: Yes, aging your venison does help but only to a certain extent. “I killed a 162-inch” buck in 2017 with a field-dressed weight of 248 pounds,” said my hunting buddy Seth Perkins. “I hung it for 10 days and it was some of the best venison we’ve ever eaten.”

Aging according to Shaw: “Aging helps with tenderness but doesn’t help with aroma.

“Don’t get me wrong,” he said, “I’ve had bucks that were dry aged that were amazing. It’s not necessarily size and age of the animal—it’s about what stage of the rut they were killed.”