Deploying scents to fool predators isn’t a new idea–after all, wolfers in the 19th century used woodsmoke to cover their... 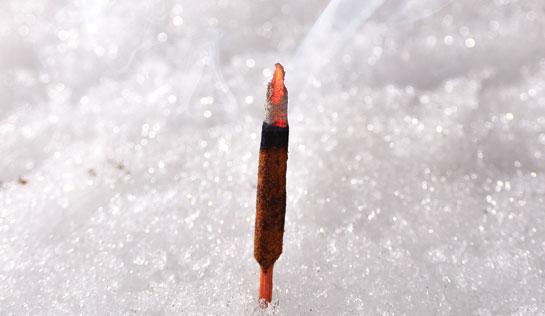 Deploying scents to fool predators isn’t a new idea–after all, wolfers in the 19th century used woodsmoke to cover their ripe body odor–but a new crop of commercial scents adds rabbit urine, fox pee, putrid meat, and even incense to your coyote-hunting arsenal.

The question is, do these products work? I am a skeptic when it comes to relying on anything besides a good call and sometimes a decoy in my predator sets, but my field tests revealed that some of these products can increase your odds of success if you use them correctly and with restraint.**
Bait Material**

This bait-in-a-bag attractant is designed to give either coyotes or wild hogs an easy meal in an area of your choosing. Hunter’s Specialties Bait ‘n Blast is a mix of animal proteins that I combined with water as directed, but it froze solid.

Verdict: A good idea, but at about $10 for a 3-pound bag, it’s not very cost-effective.

These scented sticks are designed to be lit and then allowed to smolder, sending predator-enticing fragrance wafting downwind. I never saw a coyote in either of my sets.

Verdict: If a coyote can smell this stick, it can probably smell you. The only utility I noticed is that the smoke is a great visual cue to confirm wind direction.

These products supposedly attract coyotes by appealing to their sex drive. I never saw a coyote while using them, but two days later I found fresh coyote scat around trees where I had put the scent while hunting.

Verdict: Useful as a cover scent. Prior to breeding season, estrus scents may repel as many coyotes as they attract.

I used a couple of different brands of rabbit urine scent along a brushy Montana stream.

Verdict: Easy to use, and useful as both attractant and cover scent. I missed a coyote that paused momentarily to sniff a branch I had doused with Tink’s Trickster Rabbit Mist. Not strong enough to pull in a coyote, but a good distraction scent.