The scent industry wants you to believe that a splash of tarsal secretion will bring bucks in on a run.... 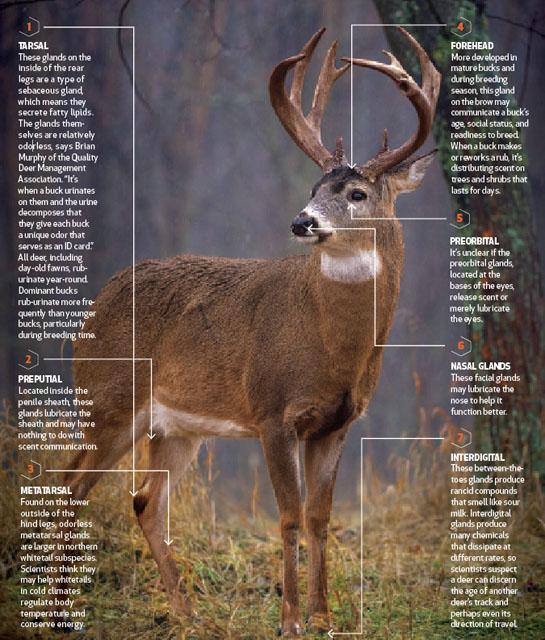 The scent industry wants you to believe that a splash of tarsal secretion will bring bucks in on a run. But a look at a deer’s endocrine system reveals a number of different scent glands, each of which can trump the tarsal for musk production.

Scientists have identified seven different glands that bucks possess, and here’s what we know about them.

1. Tarsal
These glands on the inside of the rear legs are a type of sebaceous gland, which means they secrete fatty lipids. The glands themselves are relatively odorless, says Brian Murphy of the QDMA> IT’s when a buck urinates on them and the urine decomposes that they give each buck a unique odor that serves as an ID card.” All deer, including day-old fawns, rub-urinate year round. Dominant bucks rub-urinate more frequently than younger bucks, particularly during breeding time.

2. Preputial
Located inside the penile sheath, these glands lubricate the sheath and may have nothing to do with scent communication.

3. Metatarsal
Found on the lower outside of the hind legs, odorless, metatarsal glands are larger in northern whitetail subspecies. Scientists think they may help whitetails in cold climates regulate body temperature and conserve energy.

4. Forehead
More developed in mature bucks and during breeding season, this gland on the brow may communicate a buck’s age, social status, and readiness to breed. When a buck makes or reworks a rub, it’s distributing scent on trees and shrubs that last for days.

5. Preorbital
It’s unclear if they preoribital glands, located at the bases of the eyes, release scent or merely lubricate the eyes.

6. Nasal Glands
These facial glands may lubricate the nose to help it function better.

7. Interdigital
These between-the-toes glands produce rancid compounds that smell like sour milk. Interdigital glands produce many chemicals that dissipate at different rates, so scientists suspect a deer can discern the age of another deer’s track and perhaps even its direction of travel.

Today, many companies sell gland lures, promising they’ll draw bucks like moths to a flame. But hunters should understand that whitetails don’t use gland-associated odors to draw other deer to them.

“Some of the glands communicate information about a deer—they don’t really attract other deer,” says Dr. Karl V. Miller, professor of wildlife biology at the University of Georgia. “If gland odors were as attractive as some hunters think, then they would bring all the deer together in an area, and we know that doesn’t happen.”

Instead, gland odors may be interesting to bucks because rising testosterone levels make males more aggressive, curious, and territorial. To get the most from gland lures, use them to stop deer in a shooting lane or in conjunction with a decoy throughout breeding season to communicate that a new buck is in the area and ready for romance.