How Gene Mapping Could Save Some African Game Species

Photo by Frank Miniter The lesson we can learn from the rebound of American bison might help a whole passel... 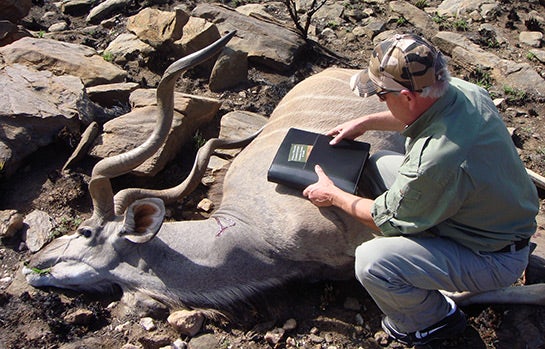 The lesson we can learn from the rebound of American bison might help a whole passel of African animals whose fate is clouded by poaching and habitat destruction. How? By mapping their genetic identity, suggests Dr. James Derr, a biologist at Texas A&M University.

In the second half of the 19th century, an estimated 30 million American bison were reduced to only a couple hundred. Inbreeding of these survivors should have led to their extinction. But these days, more than 500,000 buffalo roam the continent.

Derr found the success of the bison restoration was mainly due to a handful of ranchers from all around North America who had saved a few buffalo from the days of the open range. The ranchers wanted the bison to breed with their cows, hoping to give their cattle immunity to local diseases and parasites. This experiment didn’t work, but when the U.S. government began looking for animals to repopulate the species, it found these ranchers with bison from different regions and with different genetic stock. This genetic diversity helped save the species, according to Derr’s investigation into bison DNA.

After years of research and taking 40,000 genetic samples of bison tissue, Derr has decided to confront a more pressing problem. He wants to study the genetic diversity of wild leopards and to use this research to help other wild felines. But once he realized he couldn’t get funding to collect DNA samples from 200 leopards across Africa, the longtime hunter came up with a better solution. Derr had hunted in Africa and knew a few professional hunters. Why not ask them to collect DNA samples? And why not expand the idea to cover all of Africa’s game species? This would create a genetic repository that could be used well into the future in all sorts of wildlife studies.

He submitted grant proposals to the Dallas Safari Club (DSC) and the Safari Club International Foundation (SCIF). These organizations, along with private donors, have given more than $100,000 to this project.

Now, thanks to Derr and an extensive network of cooperators, PHs in 11 African countries are collecting DNA from hunter-killed game with kits made available by the study. To date, more than 250 DNA-collection field kits have been distributed so PHs and their hunters can take hair and blood samples. They’re also asked to provide information about the physical appearance of the animal and specifically where it was killed.

The biological samples are analyzed, the DNA extracted, and the genetic information uploaded to a secure website maintained by Texas A&M. This growing international database is being made available to researchers all over the world to help scientists and hunters preserve and understand the genetic identity and geographic distribution of animals as diverse as rhinos and lions and duikers.

Derr calls the work a “wildlife insurance policy” for the future of Africa’s game animals, and he cites the passion and generosity of hunters, mainly from the U.S., for the success of the program.