For the past three years, the Velocitip Ballistic System from Full Flight Technology has been an invaluable tool in gathering... 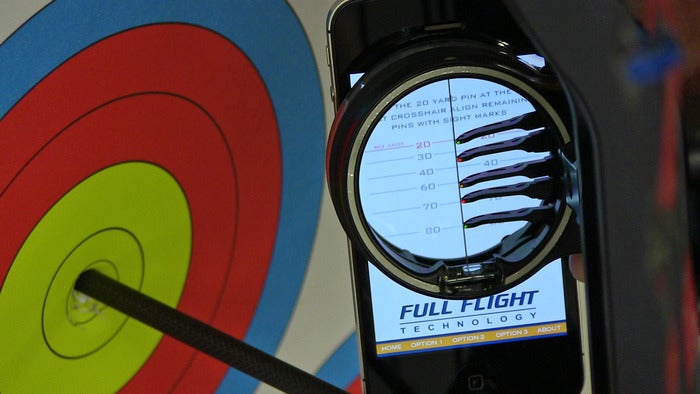 For the past three years, the Velocitip Ballistic System from Full Flight Technology has been an invaluable tool in gathering bow performance data during our annual test of the newest hunting compounds and crossbows. The 100-grain field tip, which screws into any arrow shaft like any other head, contains accelerometers and microelectronics that measure the velocity of the arrows in flight and spits back all kinds of cool, useful data, including time of flight, arrow drop at 40 yards, and kinetic energy at 20 yards.

Full Flight Technology’s newest endeavor is a mobile app, called UNO, that is designed to help archers quickly and accurately set up their pin sights. You can watch a video about how it works here, but essentially, after sighting in his bow at one distance the shooter enters his bow’s specs into the app and an extensively tested trajectory algorithm gives him a scaled set of alignment marks for the rest of his sight’s pins right on the screen of his phone. Pretty slick, right?

However, you can’t download UNO from the App Store just yet. Full Flight has recently launched a Kickstarter campaign to help fund the project, and is in need of support from the archery community. If you’re interested in helping make UNO a reality, you might consider chipping in a few bucks. As a token of thanks, you’ll get the app (for a $10 contribution) and some other cool archery-related gear.