The same Elite "shootablity" with a big fps boost 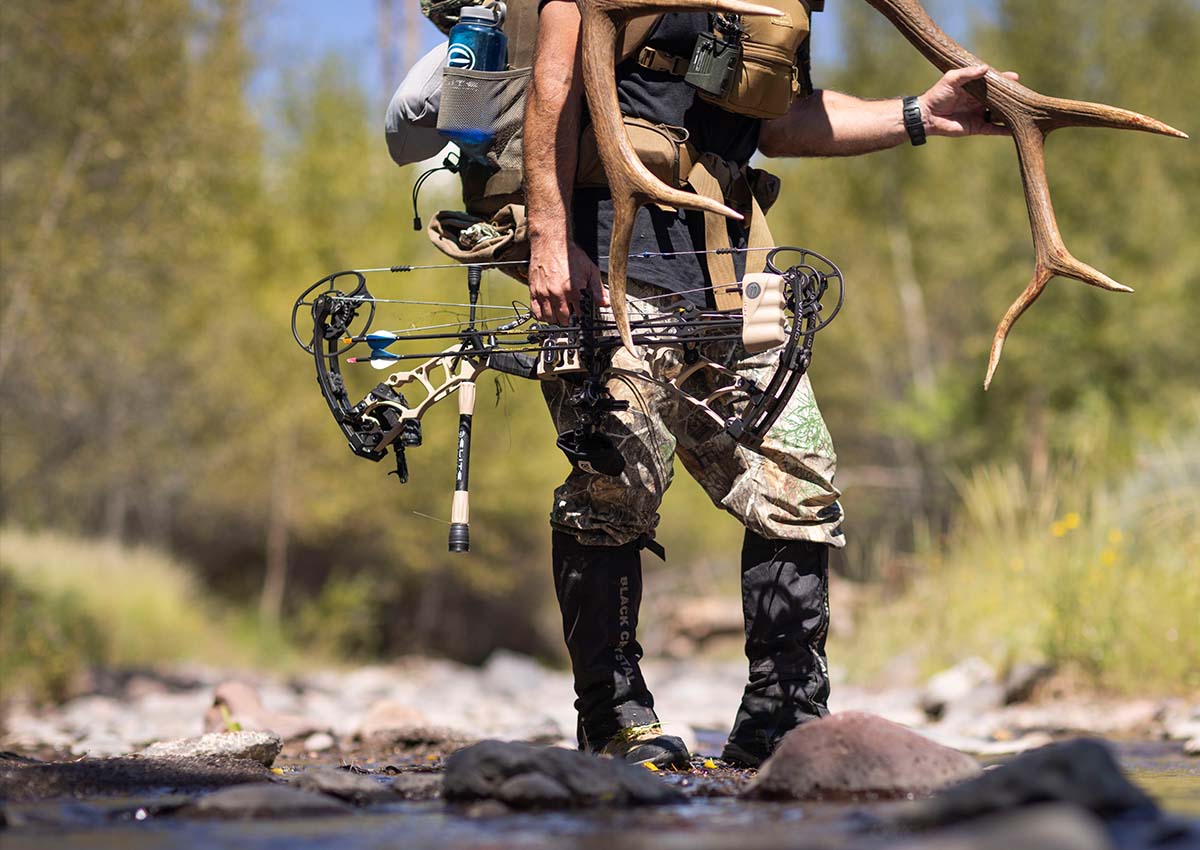 Elite Archery has been cranking out some of the sweetest shooting compound bows in the past few years. Yet you could argue they lacked speed compared to other bows.

For 2023, Elite took care of that. Meet the all-new Omnia. It’s got that “shootability” Elite hypes with all its bows, but it’s also screaming fast. In fact, it’s the fastest Elite hunting bow I’ve ever shot.

There’s no denying the Omnia looks like an Elite. The riser, limbs, and cams combined scream, “Elite.” But the SP cam is an all-new, super-charged engine for the Omnia. It’s big, and it packs a punch.

Built into the cam is the V2 Micro-Mod, which is where things get interesting. In its quest to build shootable bows, Elite understands that “shootability” varies from archer to archer. So adding features that allow individuals to customize a bow to their specs and preferences is important.

Also, as part of the V2 Micro-Mod, the let-off on the Omnia is micro-adjustable, which I haven’t seen from any manufacturer before. The let-off range for the Omnia is 70 to 90 percent. On the draw stop portion of the module, there’s a set screw and a gear-like wheel. Loosen the set screw, turn the wheel, and the draw stop moves freely. Elite claims the Omnia’s let-off is adjustable in one-percent increments.

Now I didn’t test the accuracy of that one-percent claim, and the number, frankly, is irrelevant. What’s easy to see and understand is the let-off adjustment is infinite within the limits of the range. You turn the adjustment wheel as much or as little as you want.

“Who needs to micro-adjust the letoff?”

On most bows, the let-off adjustments are defined by preset adjustments of the draw stop. Typical adjustment options for a flagship hunting bow would be 80 percent, 85 percent, or 90 percent. You choose among the three. If you want to change the let-off, you can only move to one of the other positions.

On the Omnia’s SP cam, you can easily adjust the let-off between that 90 percent and 85 percent. Again, this is another way to allow individuals to customize the bow to their preferences.

Another new feature is Elite’s Delta Vibration Technology, which are vibration-dampening accessories that work together to kill hand shock. Vibration dampeners are built into the riser and attached between the limbs. The newest part of the system is a cone-shaped dampener that’s mounted in an accessory bushing underneath the standard, front stabilizer bushing.

If you’re familiar with newer Hoyts, this cone-shaped dampener looks a lot like the Hoyt Short Stop Stabilizer, except it doesn’t have any weights attached to it. And it’s not intended to act like a stabilizer.

Heading the list of features Elite carried over to the Omnia from previous years are the limbs and limb pockets. With last year’s Envision, Elite widened the limbs, the limb pockets, and the limb stance. The combined result of all that widening is the bow holds steady at full draw and is better equipped to handle the energy released when that big cam rolls back to rest at the shot.

Also as part of this overall limb system is Elite’s (Simplified Exact Tuning) S.E.T. technology, which is Elite’s unique system for bow tuning. It requires no bow press and can be used to tune a bow in minutes.

S.E.T. causes the limb pockets to pivot, which has the same effect as twisting yolks to manipulate cam lean. And all it requires is turning an Allen screw left or right. Elite even has a sticker under the adjustment screw telling you which way to turn it depending on the paper tear you’re trying to fix. Simple.

The Omnia’s riser is long and rigid, with cages above and below the grip to boost that rigidity. The grip is flat on the back and tapers up toward the shelf to promote easily repeatable hand position—a key ingredient to consistent accuracy.

I borrowed a bow from Lancaster Archery Supply to review the Elite Omnia. The bow already had a QAD, Elite-branded drop-away rest on it, and a D-loop, but nothing else. So I started from the beginning, adjusting the rest to the appropriate height and moving it, so the center of my test Black Eagle Spartan 250-spine arrow was precisely 13/16 inches from the riser face. I checked the cam timing and had to put just one twist in the cable attached to the lower cam to bring everything into sync. Then I added a CBE CX5 sight, a 12-inch CBE Torx Spyder stabilizer, and a peep sight.

My first shot out of the Omnia through a paper tuner was spot on. Perfect bullet hole. I backed up 10 yards to confirm the arrow flight, and got another bullet hole. It was nice to know S.E.T. was there if I needed it. But I didn’t.

From there, it was over to the chronograph to check the Omnia’s speed. The results were impressive—302 fps. That’s the fastest arrow speed I’ve ever gotten from an Elite bow. The tech-savvy readers will want to know the bow specs that produced 302 fps:

Yes, I know the IBO speed rating for the bow is 347 fps. But the speed I got from my bow is still impressive because of the arrow and bow specs involved. My test arrow weighs 475 grains. It’s the same arrow I’ve used for years in my bow reviews, so I’ve shot it through several Elites in prior years. That weight is 125 grains heavier than the 350-grain minimum used to derive an IBO speed rating.

The bow was set to 70 pounds, and a draw scale verified that figure. I had the draw length at 30 inches, and the bow’s let-off was the maximum of 90 percent. In an IBO-rating test, the let-off would be set to 80 percent, generating more speed.

So that 302-fps speed I got from the bow was produced using a legit hunting arrow, with the let-off set at the max, where most bowhunters are likely to set it. If anything, my arrow can be considered a bit on the heavy side for bowhunting because the average weight for a bowhunting arrow is more like 425-450 grains.

Consider this. My 475-grain arrow traveling at 302 fps produces 96.22 ft-lbs of kinetic energy. On most KE charts recommending how much is needed for various big game animals, 80 foot-pounds is considered appropriate for bowhunting the toughest animals—grizzly bears, moose, and cape buffalo.

So the Omnia rips. The question is—at what cost? Elite for years has touted their bows as “shootable,” which means that they believe their bows are easy and pleasant to shoot.

The Omnia is a shootable bow. But the draw cycle feels different than previous Elites. That’s not surprising, given the big SP cam and the bow’s 6-inch brace height. (The 2022 Envision’s brace is a tick under 7 inches.)

From my experience, the Omnia is a nice drawing bow. There’s consistent effort required through the cycle until those big cams roll over. It’s not crazy effort. Just consistent. That’s not a bad thing. But it’s different for an Elite. Previous bows always felt like the draw weights were less than they actually were.

When it comes to aiming and shooting the Omnia, it’s all Elite. Last year with the Envision, Elite widened the limbs and the limb pockets, which just helps a bow hold super steady and full draw. They carried over those features to the Omnia. And when you release the string on the Omnia, you feel nothing. No hand shock. No vibration.

It was impressive shooting the Omnia at distance, and my arrows consistently hit right behind the pin. My test arrows have white fletchings, and the target I was shooting at 50 yards was dark, so I could easily see my arrows’ flight the whole way. They just looked like lasers with no wiggles and a flat trajectory.

Where the Omnia is Lacking

We always try to identify some areas where a bow is lacking. Sometimes, the shortcomings are issues every archer will notice, and sometimes they’re just personal preferences. I have tested all the major brand flagship compound bows every year for the past seven or eight years, so I feel like I have a pretty good handle on what’s a real shortcoming and what’s a personal preference.

The truth is, it’s hard to find any real flaws with the Omnia. But I think some longtime Elite shooters might find the Omnia’s draw cycle rough because, compared to previous Elites, it is. Compared to other bows, however, I don’t think it is. There are bows—especially speed bows—that draw rougher than the Omnia.

The first time I drew back the Omnia, I thought, “That doesn’t draw like an Elite.” After a couple of draws and knowing what was coming, I had no problem. Will the general public find the draw cycle “lacking?” Or just different for an Elite? Time will tell.

Something the Omnia does not have that most other flagships are including today is a dovetail for mounting an integrated rest to the back of the riser. So many manufacturers include this feature, which allows bowhunters to streamline their accessories. But Elite continues to hold out.

What the Omnia Does Best

The Omnia shoots arrows fast and accurately. This speed bow doesn’t feel like a speed bow before, during, or after the shot. Aside from other Elites, this is the most customizable bow on the market. The ability to make quarter-inch draw-length adjustments and one-percent let-off adjustments is unrivaled in the compound bow marketplace.

It’s easy to tune. With S.E.T., you don’t need any special tools—other than an Allen wrench—to tune the bow, and you can make adjustments on the shooting line. Everything about the Omnia is user friendly.

If you’ve found yourself in the camp of bowhunters the past few years who’ve thought, “Man, those Elites shoot nice, but I wish they were a little faster,” then your prayers have been answered. The Omnia can still boast that Elite shootability, but it’s capable of producing some ripping speeds.