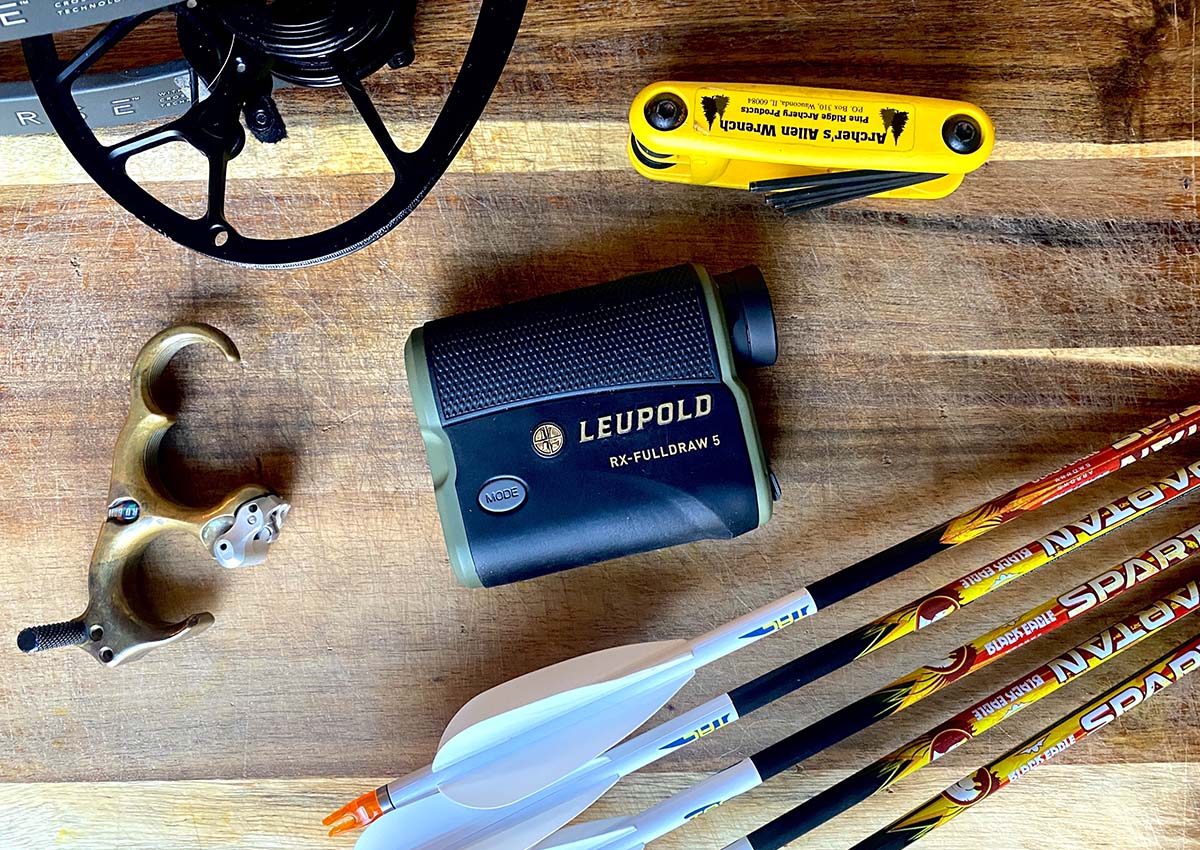 After a short but steep hike up the backside of a mountain and a white-knuckle descent down a cliff face, I peered over a cliff at a bedded aoudad ewe. I pulled my rangefinder out and tried to get a range, but something was wrong. I couldn’t see the display in the bright, west-Texas sun. While fighting to get a range, the aoudad went from a comfortable distance to my max range. A slam dunk became a tough shot. The arrow left my recurve and cleanly missed just under the ewe’s armpit. On the long climb down the cliff, I collected my arrow and quietly cussed my rangefinder.

One of the guides, Aron Snyder, had a Leupold RX-FullDraw 4 that I played with in camp. We discussed its impressive accuracy at extreme angles, brightness, and archery-specific features. After my heartbreak on the cliff, I was ready to buy a new rangefinder, and I was convinced the FullDraw 4 was the one for me. Then Leupold came out with the FullDraw 5, which works with a wider array of arrow weights and has improved performance in fog. So I got the new version and put it to the test.

Here’s how the Leupold FullDraw 5 performed during my whitetail season.

Integrating Archer’s Advantage software into the rangefinder makes the adjusted distances more accurate for your specific bow setup. To input your arrow weight, velocity, and peep height, tap the power button, hold down the mode button for one second, and then tap the mode button to cycle through the menu until you see CALC Ball. Hit the power button to select that option. Then it’s just a matter of using the power button to adjust the values of each data point. The velocity ranges from 170 to 550 fps. Arrow weights range from 200 to 900 grains. Peep heights from 1 to 6 inches.

Tight shooting lanes with branches that could deflect an arrow are an issue for anyone who hunts in the woods. The Fulldraw 5 has an indicator of your arrow’s flight path within the display, so you can tell if your arrow will hit an overhanging branch before you come to full draw. You can choose between an indicator at your arrow’s 20 yard height or the peak height of your arrow for the ranged distance.

The Full Draw 5 can produce a single range per button push, or you can hold down the range button to scan and get a continuous feed of ranges.

Testing the RX-FullDraw 5 in the Field

Bowhunters need a rangefinder that can identify targets in .5-yard increments from 0 to 100 yards because arrows drop inches per yard past 40. I used the FullDraw 5 at my local outdoor archery range, which has targets set at tape-measured distances to 100 yards. The FullDraw 5 was dead on compared to the taped distances.

So it works great on a flat range, but what about angled shots? I wanted to see how accurate the angle-compensated ranges were compared to my verified cut charts. So I climbed on my roof and started shooting. The FullDraw 5 was accurate at the angles and distances I could achieve from my roof. If you’re planning a hunt with extreme angles and long distances, like aoudad, you’ll want to practice shooting angled shots and check the FullDraw 5’s cuts at the same time.

I used the RX-FullDraw 5 during my archery whitetail season, where I saw conditions that ranged from 80 degrees and 80 percent humidity to the recent bomb cyclone. It’s still running on the same set of batteries, and it was 100 percent reliable. It worked surprisingly well in fog and rain, which are usually the Achilles heel of rangefinders.

Many of the areas I hunt have thick vegetation, and I noticed the FullDraw 5 could easily range through tight shooting lanes. On several occasions, I ranged through one-foot openings to spots 40 to 50 yards away. That was an interesting observation on the beam divergence, but I wanted to run a controlled test to see its performance.

I made a frame out of archery targets and a log with an 8-inch x 12-inch opening. Then I set a 3D target 7 yards behind the frame. The goal was to see if I put the laser rangefinder’s reticle inside the opening. Would it range the 3D target or hit the edge of the frame? I tested from 17 yards to 45 yards and never had an issue with interference. I even used scan mode to move the reticle from the frame onto the foam deer, and as soon as the reticle cleared the frame, it read the correct distance.

I’ve always had a gripe with rangefinders that didn’t work through mesh windows in blinds. The FullDraw not only works through mesh, but it also shoots through glass.

My quest for a new rangefinder began because of a dim reticle. So I paid close attention to the FullDraw’s brightness. You’ll see some bloom around the reticle in low light, but it’s balanced by good visibility during bright sun.

One of the cons of the FullDraw 5 is that for an archery-specific rangefinder, I would like less magnification for a wider field of view. I often find myself hunting for the exact tree I meant to range because the image is so zoomed in I can’t easily identify it from the surrounding trees. I also think that it would be nice to have an archery ballistics app that paired with the rangefinder for easier setup and multiple bow profiles.

This is a rangefinder for the dedicated bowhunter or 3D archer. Whether you enjoy shooting targets at 120 yards or deer with your top pin, this rangefinder has features you’ll appreciate. It especially excels in ranging angled shots and through tight cover.

The strength of the FullDraw 5 is it’s made just for bowhunters, but that’s also its weakness. This rangefinder could pull double duty for bow and rifle, but it’s not for serious rifle hunters. Seeing how it’s designed specifically for bowhunting, I’d like the magnification to be lower for a wider field of view. It could also be upgraded with some of the features we commonly see in high-tech rifle rangefinders, like an app that pairs with the rangefinder via Bluetooth for easier setup and more capabilities.

Read Next: Best Rangefinders for Hunting

The Leupold FulDraw 5 is, in my opinion, the best rangefinder for bowhunting. It solves a lot of issues I’ve had with other rangefinders while offering accurate ranging at extreme angles, it works in fog, and it’s customizable to your bow setup.