Bear Hunting with Hounds Revisited: Another Referendum on the Horizon

Last October, I traveled to Maine to hunt black bears with houndsman Bob Parker. As you might recall, the Humane... 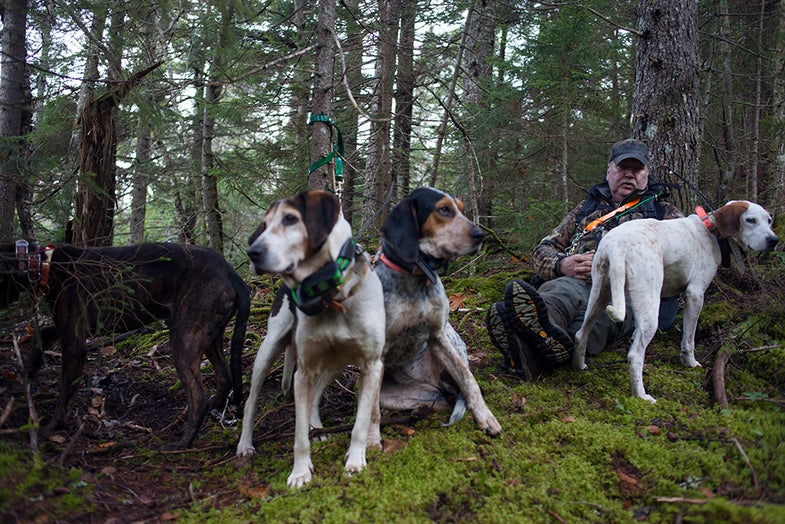 Last October, I traveled to Maine to hunt black bears with houndsman Bob Parker. As you might recall, the Humane Society of the United States was pushing a ballot initiative in November that would have, if passed, banned hunting bears with bait, with hounds, and bear trapping.

The initiative was voted down by 54 percent of voters, but none of us were certain of that outcome at the time of the hunt. I was there to capture the story of Parker’s hunt with his dogs and his friends just before the vote: It could have been their last hunt together in Maine.

Initially, I wasn’t going to be the trigger man. I was just there to tag along and get the story. But on our first night in camp, Parker told me the only other hunter scheduled for that week was going to hold out for a really big bear. So, if we wanted to follow the hunt through to the end—from tracking and chasing to the kill itself—I had better buy a license.

I’d never hunted behind hounds before and, secretly, I had the same concern many other hunters might: Is this going to be “fair chase?”

The next morning that concern faded away within a few hours. You can read about that hunt here, but my takeaways were that hunting bears with hounds—or at least the way we did it in Maine—is challenging, thrilling, and undeniably a hunt at its core. Long before treestands, food plots, or optics for glassing, hunters ran down their prey, chasing the sound of their baying dogs.

I’m writing about this now because last month Wayne Pacelle, president of HSUS, said his group was considering another referendum vote in 2016. This one would seek to ban hunting with hounds and trapping.

“I’ll confirm that if there is a ballot measure, it would most certainly focus on the hounding and the trapping,” Pacelle told the Bangor Daily News. “I think we said right after the vote that we felt that there was an emerging consensus that bear trapping and hounding are unacceptable to the Maine electorate… We do oppose baiting, but it appears to have been the most divisive of the three elements on the 2014 ballot measure.”

Pacelle is hoping that Maine residents (many of whom are hunters) will vote to ban bear hunting with hounds without first really understanding the pursuit. HSUS will spend a ton of money on television commercials attempting to persuade voters that hunting with hounds is unethical.

So I ask this: Before you solidify your opinion on hunting with hounds, try it. Tag along on a good long chase. But buy a license before you go, because when you get to the top of the mountain they might hand you the rifle. And when they do, you just might want to pull the trigger.