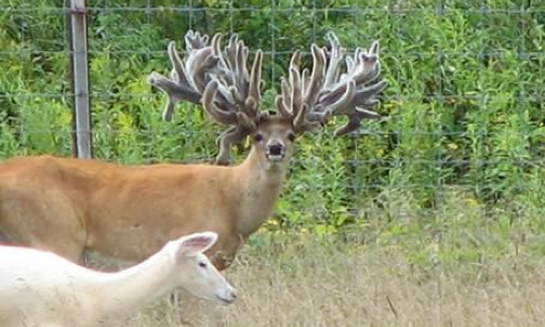 Brian Murphy, the Quality Deer Management Association’s CEO, issued a national call to action in a recent news release opposing the proliferation of captive deer breeding. Murphy cites concerns over the disease threat to wild deer and the future of deer hunting among the reasons for opposing the practice.

In their opposition to captive deer breeding, the QDMA stated: “There are no benefits for deer hunters in the growth of the captive deer industry–only risks. It’s QDMA’s mission to protect the future of white-tailed deer and our deer hunting heritage and oppose anything that puts those at risk.”

According to QDMA, captive deer facilities are high fenced, restricted areas where artificial breeding technology is used to produce whitetail bucks with enormous and often grotesque antlers. The practice has grown into a billion dollar industry where breeders buy and sell deer with outsized antler genes, sell semen from breeder bucks and offer bred does for sale. Bucks incapable of producing massive antlers are often sold to pay-to-shoot operations that offer “controlled hunts” of released captive deer.

Murphy states that the captive deer industry “undermines the North American Wildlife Model in which wildlife are a public resource … [Captive deer farming] also threatens the health of wild deer and the public’s perception of hunting.”

Murphy, a professional biologist, sites the spread of Chronic Wasting Disease (CWD), a fatal disease of deer and elk, as being associated with the transportation of captive deer and not natural deer movement. Once CWD infects wild deer in a new area, stopping the disease requires costly investigation, testing and surveillance efforts for many years, and results in drastic reductions of deer populations. There is currently no known method to decontaminate a deer herd hit by CWD.

QDMA is urging sportsmen and wildlife supporters to oppose the expansion of deer breeding operations into areas where they are not currently permitted. Expansion legislation is currently under consideration in the following states: Georgia, Indiana, Mississippi, Missouri, North Carolina, Tennessee and West Virginia.

Governmental accountability is at the heart of the problem. Most states consider captive deer breeding to be an agricultural practice like livestock breeding. It is therefore placed under the supervision of agricultural authorities, many of whom have little or no wildlife training and consider captive deer farming to be an important growth industry providing jobs and tax revenues.

Most wildlife professionals (including most state wildlife agencies) on the other hand, have serious concerns about artificial reproduction and the commercial use and transportation of a wild species like whitetail deer. The QDMA favors putting supervision responsibilities for captive deer under the same department that oversee wild deer and deer hunting.