Invasive species can spread in many different ways, but how about by helicopter transport? That’s the case in Hawaii where... 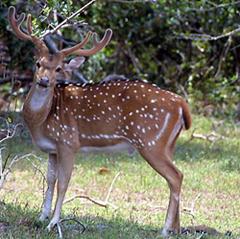 Invasive species can spread in many different ways, but how about by helicopter transport?

That’s the case in Hawaii where ranch owner Jeffrey Scott Grundhauser and helicopter pilot Thomas Leroy Hauptman are being tried for illegally transporting axis deer and mouflon sheep by chopper.

This from the Associated Press: “The alleged animal smugglers took axis deer from Maui to the Big Island and dropped them off to roam. Officials say they took Big Island sheep to a Maui hunting ranch, but apparently didn’t release them to the wild. Even so, the sheep’s arrival on Maui for the first time deeply concerns conservationists who fear the animals could escape or give others the idea to bring over more.
_
‘Some of our most endangered dry forest community on Maui would definitely be negatively impacted if sheep got established on Maui. They’re already being impacted by the deer. The sheep would just be one more thing that was contributing to their demise,’ said Chuck Chimera, a botanist on Maui involved in efforts to fight invasive species.”_

The Hawaiian Islands are part of an incredibly fragile ecosystem and are already under siege from invasives such as hogs, brown tree snakes, chameleons, rats, and frogs.

Both Hauptman and Grundhauser could face up to one year in prison if found guilty. Hauptman could also have to volunteer 500 hours of flight time to a group fighting to eradicate axis deer from the Big Island.

Now that sounds like a punishment to fit the crime.