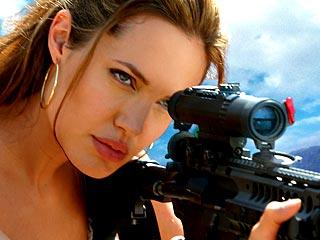 Brad Pitt gives awesome presents. Pitt spent close to $400,000 to build a shooting range/armory for Angelina Jolie, his bride-to-be, at the couple’s Miraval estate in southern France, according to The Sun.

An unnamed source said “Ange,” that raven-haired curvaceous vixen with the perfect lips, is an adrenaline addict who loves shooting.

“Ange clearly finds shooting an aphrodisiac,” the source said. “When she and Brad were around weapons on the set of 2005’s Mr & Mrs Smith they ended up together.”

Not much else is known about the range other than it has pop up human silhouette targets.

For my money, a gun range is a far better wedding gift than the vial of blood her last husband Billy Bob Thornton gave her on the day of their nuptials.