Our buddies at LouisianaSportsman.com had this trail camera photo posted to their site earlier this month. The shot was taken... 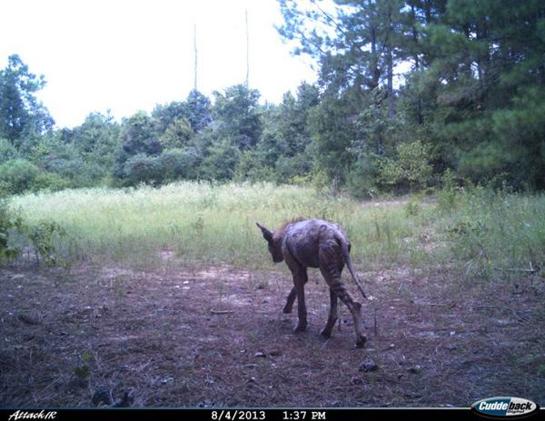 Our buddies at LouisianaSportsman.com had this trail camera photo posted to their site earlier this month. The shot was taken about three miles east of Toledo Bend lake in Louisiana.

Immediately readers guessed the strange-looking creature was a hyena, a chupacabra, or a coy dog. I was almost certain it was a new genetically modified species created by the government.

Patrick Bonin forwarded the photo to Dr. Jim LaCour of the Louisiana Department of Wildlife and Fisheries who decided the specimen was in fact a mangy coyote.

This from Louisiana Sportsman:

_”Demodectic, or red mange, is a hereditary condition caused by an immune deficiency that the animal has against mange mites, and can’t be transmitted to humans, LaCour said.

‘The mites proliferate in the hair follicles, rupture the follicles, the hair falls out and they get secondary staph infections,’ he said.

Sarcoptic, or common mange, is caused by a different mite and can be transmitted to other animals — including people, LaCour said.

‘It is contagious, so it can be within a population or an area and spread to other groups of coyotes in that area,” he said. ‘They need to have direct contact or contact in areas where they bed.'”_

LaCour was unable to tell which type of mange the coyote had, but at least Louisiana hunters don’t have to worry about chupacabra attacks this fall.