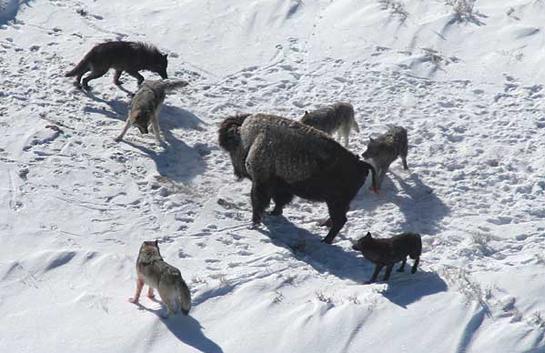 Yellowstone National Park released its annual wolf report for 2012, and the data reveals two interesting trends. First, the park’s wolf population declined by about 15 percent from roughly 100 wolves in each of the three previous years to 83 wolves by the end of 2012. Second, Yellowstone’s wolves preyed on more bison in 2012 than any previous year.

Although the decline in population alarmed some, the leader of the Yellowstone Wolf Project says the predators are simply coming into balance with their environment. “The number of wolves are here that can be supported by prey,” leader Doug Smith told Montana Public Radio.

In 2012 Yellowstone’s 83 wolves divided into 10 packs, supporting a total of six breeding pairs. In the previous year eight breeding pairs inhabited the national park. Overall, Yellowstone’s wolf population has declined by roughly 50 percent since 2007, when 171 wolves roamed the park.

The wolves in Yellowstone’s northern range suffered the largest losses in 2012. This decline coincided with a drop in elk numbers in the same area. Wolves primarily prey on elk, and researchers calculated elk comprised 62 percent of all 2012 Yellowstone wolf kills.

By turning bison into a more regular food source, the wolves in the park’s interior sustained significantly fewer losses. Bison comprised 13 percent of wolf kills in 2012, the highest percentage recorded since wolves were introduced to the park in 1995. Nearly half of the bison killed were calves.

Smith said wolves turned to bison when elk proved too few or too difficult for wolves to prey on. The mild winter of 2011-2012 left fewer elk vulnerable to predation, and young bison proved an easier target than adult elk. Bison also calve earlier than elk, and most of the bison kills took place in the spring.

Although availability of prey is one factor affecting Yellowstone wolves, Smith said the leading cause of wolf deaths is aggression by other wolves. “Wolves go looking for food, which means they trespass on other wolves’ territories and because they’re territorial, they fight back,” Smith told the radio station.

State hunting seasons outside of Yellowstone’s boundaries resulted in a harvest of 12 wolves that primarily lived inside the park. Idaho, Montana, and Wyoming supported the largest nearby wolf populations with approximately 683, 625, and 277 wolves respectively. Yellowstone Wolf Project officials plan to release data for 2013 in early 2014.