Mix up distress squeals, barks, and howls to call in the most elusive and savvy of predators. 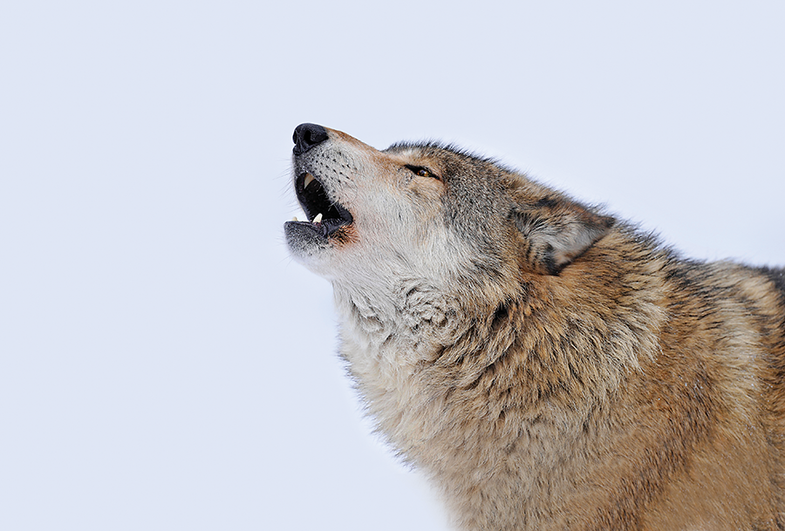 Mike Faw had his fox pup distress call blaring full blast when he spotted four wolves heading his way from across the river. The small pack dipped below the riverbank and then
disappeared.

Faw scanned the woods for a few moments without detecting movement, when suddenly a big black male wolf emerged from the timber. The wolf trotted in and Faw shot him at 30 yards and closing.

Faw, who runs marketing for the sight company Crimson Trace, has hunted big-game across North America, but he contends that there’s nothing more exciting than calling in wolves. Here’s how to get in on the action.

1. Find Them
Wolves have large territories—50 square miles or more—so you can’t just wander out into the woods and start calling. Locate a pack’s core area by wolf howling or coyote howling from roads and ridges, but don’t expect to draw them in that way, Faw says. “Wolves are territorial, so they’ll respond to howls. But unless you’re already in their core area, they won’t come in to investigate.”

Wolf howls should be loud, long, and guttural—“almost mournful,” Faw says. But you don’t need to get fancy. A two-tone voice call (hands cupped around your mouth) going from high to low will work, says Dick Snell, a veteran wolf caller and former predator-calling champion. Howl three times at most and then wait and listen.

2. Get Loud, Then Sit Tight
Because wolves generally live in denser cover than coyotes, you need to call louder than you would on a coyote hunt. Faw starts with an electronic fox or coyote distress call on low volume and then gradually turns it up to maximum volume for a few minutes. Snell recommends using coyote challenge howls, barks, and yips to simulate coyotes fighting over a kill. He simulates a fight for 20 to 30 seconds, then waits about 20 minutes before challenge howling again. If you’re in elk country, bugles and cow chirps will also draw in wolves, Snell says.

There’s nothing run-and-gun about wolf hunting. Faw suggests setting up a ground blind and waiting out a set all day (he shot his black wolf at noon). Wolves will come to a call from a long distance. They’ll circle your position, or they’ll just sit, wait, and watch. It can take hours before they decide to commit to a call. But when they do, they’ll usually come in quickly.

“I’m still amazed at how fast wolves can move without putting any effort into it,” Snell says. “Before you know it, they’re in your lap.”

3. Stay Ready
“Guides I know can attest to this, too,” Faw says. “When you see a wolf coming in to your setup, it sends chills down your back. You’re going to be nervous, so you need to be ready to shoot.” Shooting sticks provide a steady rest when your heart is pounding, and they also make sure your gun is always in shooting position. Any movement will get you busted. Set up in an area where you can see at least 100 yards so you’ll have time get on an incoming wolf.

If you’re not sitting in a blind, Snell says, hunt with a buddy positioned about 10 yards downwind of you. “Predators, especially wolves, always seem to know where your back is, and you don’t want a big wolf sneaking up behind you,” he says.

Tip:
Use Enough Gun When it comes to choosing a caliber, wolves should be regarded as big game, not varmints. Experienced wolf hunters recommend using a .30-caliber rifle and up. Wolves are solid animals with heavy, matted fur, and commonly weigh 150 pounds or more—about the size of a young whitetail buck.