Producers and scientists involved in the documentary The Search for the Ocean’s Super Predator (which has been repackaged by the... 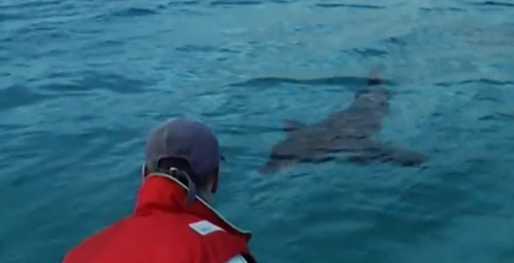 Producers and scientists involved in the documentary The Search for the Ocean’s Super Predator (which has been repackaged by the Smithsonian Channel and titled: Hunt for the Super Predator) have solved the 11-year-old mystery of what killed an ate a 9 foot great white shark off an Australian beach more than a decade ago.

One almost twice as big.

The story began 11 years ago when a tagged shark known as “shark alpha” went missing in a sudden temperature change while swimming at a depth of 1,900. The shark’s monitor went from 46 degrees Fahrenheit to 78 degrees in a matter of seconds. The only explanation is that “shark alpha” went inside another animal.

But what is capable of killing and devouring a 9 foot apex predator?

A cannibalistic great white measuring 16 feet and weighing more than 2 tons, that’s what.

Scientists say that the monster shark matched the smaller sharks temperature and could easily match its speed and trajectory.

Theories as to why a great white would be cannibal range from it was a territorial dispute to a hunger induced attack.

It’s a tough, shark eat shark world down there for sure.