Is This the Biggest Tarpon Ever Caught? 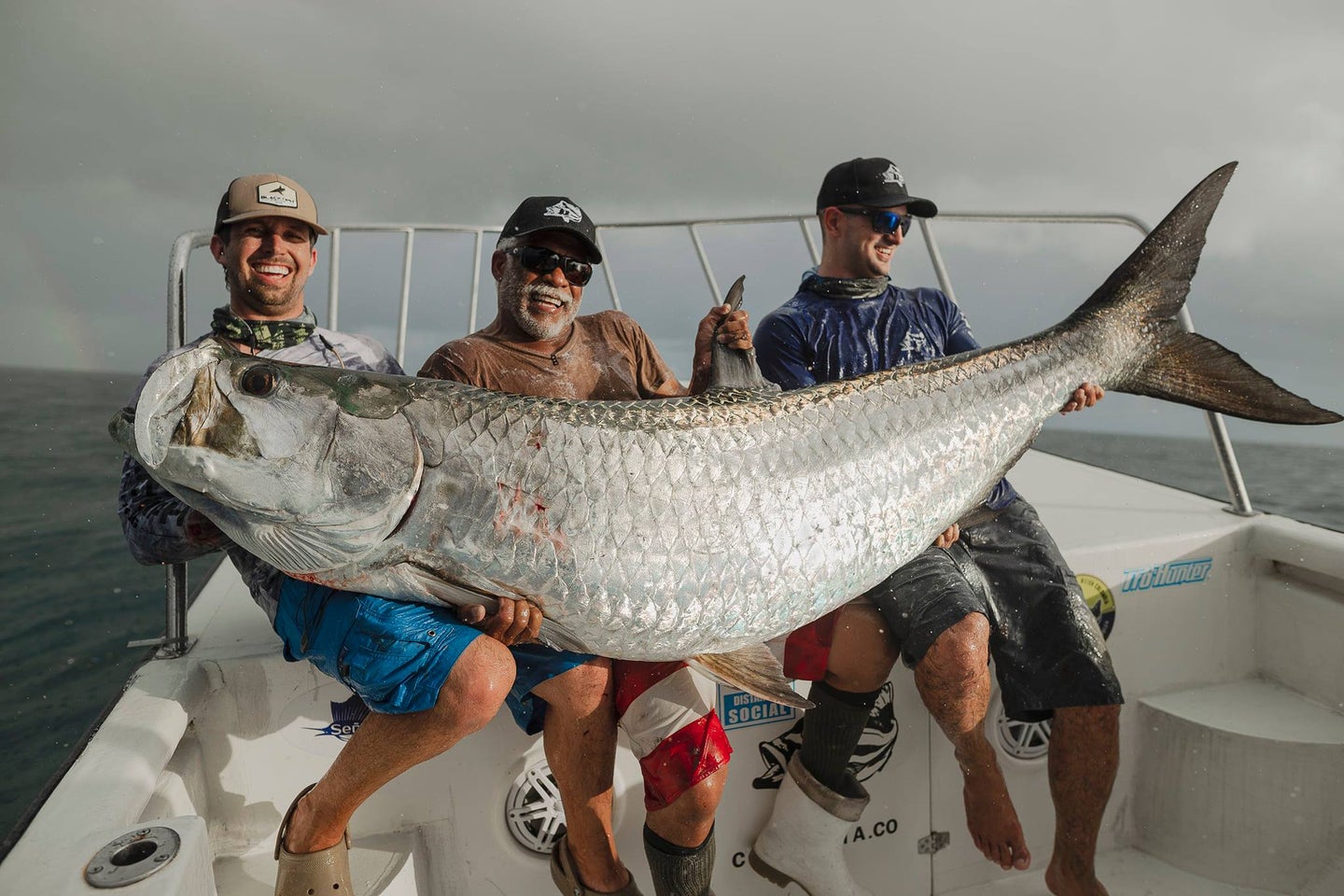 What could have been the largest tarpon ever caught was released. BlacktipH
SHARE

Photos and video of a massive tarpon estimated to weigh more than 300 pounds are going viral on social media. The giant fish was caught May 8, off Bahia Solano, Colombia, in South America. The angler was American Josh Jorgensen, who runs BlacktipH, best known for the YouTube channel of the same name.

Three American anglers had flown into the remote area the morning of May 8, and by that afternoon were fishing. In the group were Jorgensen, his cameraman Davis Bennett, Dr. Robert Borrego of Palm Beach, Florida, and outfitter Alberto Meija of Fish Colombia.

The anglers were targeting roosterfish and Jorgensen had just caught one, his first of the species. Baits were put back out and the tarpon hit. For nearly two hours they battled the fish. The fight was so arduous that Jorgensen had to pass off the rod because he has a serious back condition.

For a time Borrego fought the tarpon, then he had to pass the rod off to Meija to finally subdue the fish and bring it boat side. That’s when the anglers realized how truly big it was.

“We couldn’t believe how thick the fish was,” said Jorgensen. “It was massive. We wanted to work closer to the fish in the water, but we were in an offshore boat with 3.5-foot high gunnels and couldn’t get down to the fish to measure it. So, we had to pull it aboard.”

Jorgensen says it took four grown men all the strength they had to get the tarpon into the boat, measure it, pose for photos, and release it.

“The fish looked strong and healthy when we released it, and that’s shown on the video,” he said.

The anglers measured the fish at 87 inches long (to fork of tail) with a 54-inch girth (at the dorsal fin). Using the Tarpon Bonefish Trust website tarpon calculator (recommended as the most accurate by many anglers), the tarpon would have weighed 312 pounds. That far exceeds the current IGFA all tackle tarpon of 286-pounds, 9-ounces taken in Africa in 2003.

The Colombia fish would in no way be qualified as a world-record catch because more than one angler battled the fish. But the size of the fish, and where it was caught, are remarkable in several ways.

Moreover, some of the biggest tarpon on record have come from Lake Maracaibo, Venezuela. That area is noted for big tarpon, and though it’s in the Atlantic, it’s not that far east of the region where the Colombian fish was caught.

Adding to the validity of the tarpon weight, a number of noted anglers and tarpon experts have viewed the photos and video. Billy Delph, famed Florida Keys guide and angler, believes the tarpon was over 300 pounds. So does Raymond Douglas from King Sailfish Mounts, who has seen hundreds of giant tarpon. Two other noted guides who believe the photo showing the tarpon is of a massive fish that likely is over 300 pounds include Capt. Earle Waters of Homossasa, Florida, and Capt. Dave Markett, one of the most experienced guides at Boca Grande, Florida.

Grumbling among some folks about the would-be record tarpon from Colombia may never subside. But the bottom line is it was one helluva tarpon.