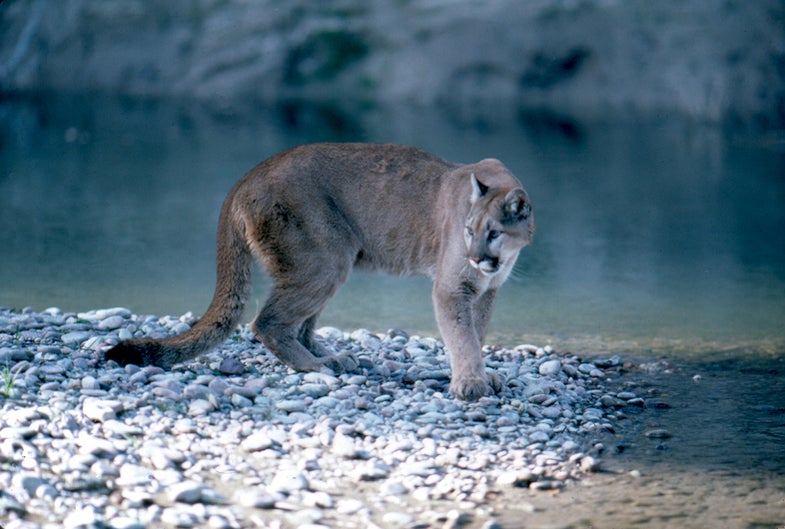 A 40-year-old hiker fended off a stalking cougar….by singing opera?

Kyra Kopenstonsky was hiking a trail near Down Valley Park in Placerville, Colo., last week when she caught the attention of a mountain lion. The big cat reportedly stalked her for twenty minutes, often pouncing in front of her. Kopenstonsky brandished a branch to make herself appear larger, but when it didn’t phase the cougar, she tried another tactic.

“I don’t know why, I just started singing opera really loud,” Koestonsky told KUSA. “It kind of put its ears down and just kept looking at me, and it sort of backed away. Then, it came around the bushes and came towards me again and crouched about 10 feet away.”

Althoug Kopenstonsky’s singing didn’t deter the big cat completely, it seems to have unsettled the feline long enough for the hiker to safely retreat.

“I would back up and it would creep forward, so I’d stop. Eventually it sort of crouched down, like part way,” Kopestonsky said. “So, I start backing up down the mountain, which was really steep.”

In between the closest encounters with the cat, Kopenstonsky managed to call her roommate, who in turn contacted the San Miguel County Sheriff’s Office. Sheriff William Masters and six deputies responded to the situation. Two officers encountered Kopestonsky when she emerged at the trailhead–shaken but uninjured.

“We’re glad this turned out to be nothing more than a frightening experience for the hiker. She was obviously educated as to what to do in this unexpected situation,” Sheriff Masters said in a press release.

Sheriff Masters added that there have only been a few dozen lion sightings in the county in the past 34 years, and only one reported stalking incident. Among other tactics, officials do recommend singing or speaking firmly in the event of a mountain lion encounter.