Fences. Perhaps the only item more symbolic of a lack of public access than a “No Trespassing” sign is a... 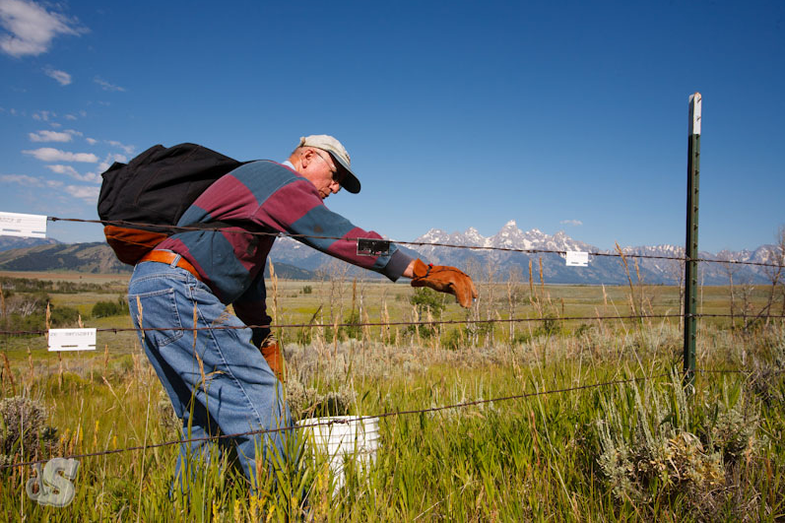 Fences. Perhaps the only item more symbolic of a lack of public access than a “No Trespassing” sign is a fence.

Three strands or five. Barbed or high-tensile. A fence sends a pretty clear message: Keep out. To wildlife, it can carry another message: Death. The Jackson Hole Wildlife Foundation is trying to change that, one mile at a time.

“Fencing does more than keep people out, it also impacts the movement patterns of wildlife,” said Corey Hatch, executive director of JHWF. “A fence isn’t just a reminder that access might be limited, it can also mean that wildlife are facing an unnecessary risk. We want to remove as much of that risk as we can.”

In 1996, JHWF conducted a project to remove unwanted fence from private land near Wilson, Wyo. From that single effort, a movement was started and a new mission for the organization was launched. In 2006, the group and its team of volunteers topped the 100-mile mark for fence removal. That number has steadily risen since.

On Saturday, October 11, the group will add to the mileage with an Open Country project on the Porcupine Plateau located north of Hoback Junction, Wyoming, removing mesh exclusionary fencing in an effort to open up additional seasonal elk migration routes.

Volunteers will meet at one of two locations – the Smith’s parking lot at 8:30 a.m. or Swinging Bridge at 8:45 a.m. Volunteers will work from 9 a.m. until about 2 p.m. Gatorade and water will be provided but you should bring your own bottles. And don’t forget to bring a lunch as well.

The JHWF fence-pulling efforts are making a real difference for both public access and wildlife.

“We don’t necessarily look at this as a way to improve public access, but that is often a benefit because some of the work is done on public lands. But it’s really a way to help save a lot of wildlife,” said Hatch. “Studies have shown that fences are big problems for wildlife in areas like this. When animals try to jump the fence, they can become entangled. Some fences prevent big game like elk and mule deer from following the easiest, most energy-conserving routes. They will walk miles to find a gap in the fence. And when every calorie counts in the winter, that’s a lot of wasted calories.”

Those wasted calories can lead to death.

JHWF works with the Bridger Teton National Forest, Wyoming Game and Fish Department, Grand Teton National Park, and private landowners on its fence-removal projects and typically works on about a dozen projects per year.

Often, those efforts are focused on lands previously grazed by cattle.

“We have no position on cattle grazing. We’re not looking to create any controversy. We’re looking to help wildlife in the Jackson Hole area. So when an allotment is retired, we will go in and remove the fence that’s no longer needed,” Hatch said.

One of the JHWF’s projects—the one that put it over the 100-mile mark—was done on Grand Teton National Park, in an area of high importance along a major migration route of pronghorns.

“We’re not a big organization. But we have a very solid, reliable stable of volunteers that really, truly care about the wildlife in the Jackson Hole area,” said Hatch. “Every mile of fence we remove or alter to be more wildlife-friendly is something we take a lot of pride in.”