How to Scout for Deer During Spring Turkey Hunts

Be on the look out for rubs, game trails, and large community scrapes this turkey season 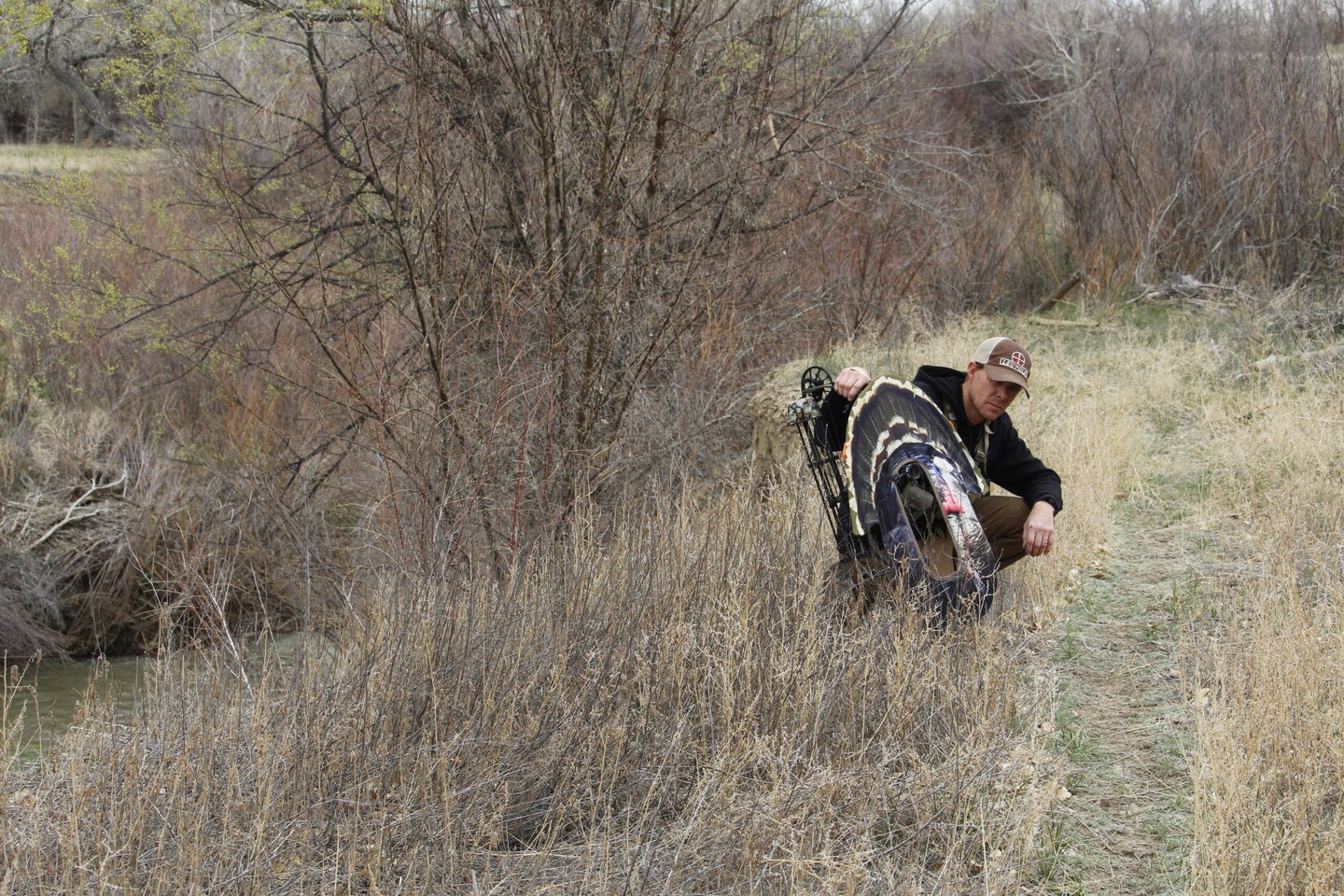 Finding pinch points along waterways is an ideal place to focus on for next dee season. Jace Bauserman
SHARE

Hard-gobbling turkeys rank high on my hunting list, but even on a perfect spring morning my attention is never 100 percent dedicated to longbeards. While I’m turkey hunting, I always scout for deer and many of my turkey spots have turned into some of my best deer hunting spots over the years.

Recently, I looked back at my hunting journal and nine of my best 15 whitetail spots were discovered while turkey hunting. If you have ever owned or leased a property, you know that creating good deer habitat also increases your turkey population as long as suitable roosting trees are close by. So it makes sense that once you find a good area for killing turkeys, you have also likely found a place to hunt deer.

Whether you turkey hunt large swaths public land or small parcels of private, you can use this spring to score a better buck in the fall. Here’s what you need to be looking for while turkey hunting over the next few weeks.

Keep Your Eyes Open for Rubs

Rubs are my favorite type of whitetail sign because they are the easiest to identify. Trees and fenceposts that have been scraped at by a buck’s antlers during last season’s rut will tell you that this is a hot area for whitetail traffic.

If you are walking the turkey woods and one rub quickly becomes five, stop and take notice. Look at the size of the rubs as well as the diameter of the trees. Typically, mature bucks battle with big timber. Next, pay attention to what side of the trees each rub is on. This is important for a couple of reasons. It’s likely the rub line will face toward a bedding area, which means the buck is using the trail when headed out for the evening as well as when returning to home base.

Follow the rub line as far as it will take you, and along the way, keep an eye peeled for the most likely bedding cover. Tall, native grasses and thickets are likely bedding areas. Don’t be afraid to dive in and start prospecting. You aren’t harming a thing this time of year. Buck bedrooms are often thick, and it’s typical to find plenty of random rubs, a scrape or two, and large beds with white belly hair.

Your turkey hunt will be on hold for a moment, but what you have found will pay off in spades this fall. You will know where one or more bucks bed. Pull up your digital mapping app and pin the bedding location and the rub line. As you retrace your steps, pay attention to the terrain and topography. Make a note of the current wind direction and use a wind checker to see what the thermals are doing at the time of day you’re in the area.

Turkeys frequent waterways. Rios like to perch in gnarled cottonwoods that drape over a river or creek and strut in the sandy soil. Eastern birds wander along small creeks that cut through the landscape. These little creeks tie together ridge systems and often dump into larger bodies of water. When you find water, you typically find turkeys.

Whitetails love water too. As you navigate creeks, streams and rivers, pay attention to areas where the waterway pinches the landscape against a big hill, ridge, or open space. Waterways funnel whitetail movement, and these pinch points will typically have an extensive trail pounded with tracks running through the pinch.

River crossings are smart places to identify as well. If you find a shallow area in the river that looks like it has been pounded by animal tracks, mark it on your phone. This crossing is likely being used by does, fawns and young bucks. Take a walk a few hundred yards up and down the river, and you’ll likely find another crossing. This one may not be as noticeable but will likely have heavy footprints. It’s also not uncommon to find rubs and possibly a scrape or two on either or both sides of the crossing.

Run-and-gun turkey hunting means covering lots of ground. While turkey hunting, keep an eye out for trails that intersect. The best one I ever stumbled across was in the Oklahoma. I was turkey hunting, and the tom I was chasing clammed up. I opted to stop and eat a snack, and when I did, I noticed an area where three trails tied together. I walked each one out. The first lead to a massive bedding area. The second led to a small clearing in the hardwoods with plenty of browse. There were piles of deer poop everywhere and a few old scrapes. The third trail led toward a large ag field. I marked a tree that would put me 23 yards from the intersection and returned that fall for a hang-and-hunt mission. That night I saw 24 deer and killed an old six-point.

Read Next: How to Study Late-Season Scrape Lines to Find Big Bucks

Most whitetail hunters get jacked about scrapes, but I am not one of them. If you pay attention during your turkey hunt, you’ll likely find dozens and dozens of scrapes. Scrapes are common around field edges as well as random places in the woods. Scrapes are a form of whitetail communication, but a buck may make a scrape and never revisit it. Of all the sign I find while turkey hunting, I pay the least amount of attention to scrapes. I’d much rather discover a hidden fruit orchard with piles and piles of droppings around it. The only time I mark a scrape is if it’s big—about half the size of a car hood. This is a community scrape, which multiple bucks will use it.