This is NOT the Next World Record Elk

This bull was making waves around hunting forums earlier this season as an archery bull killed this year in New... 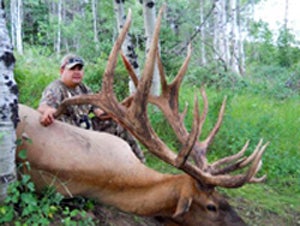 This bull was making waves around hunting forums earlier this season as an archery bull killed this year in New Mexico tapping out at 595. While it’s a big bull, all signs point to high-fence, which makes it eligible for scoring with SCI, but not under the Fair Chase standards of the Boone and Crockett Club.

The hunter, Daniel Baeza, posted photos of this bull on his Facebook page on August 26. He writes that the guide scored it at 536 in Idaho where he shot it. Keep in mind, Idaho’s rifle season begins in October, but high-fence hunts need no seasons. The good folks at Boone and Crockett say that they have been notified about this bull, including from someone who was on the hunt. The bull was taken on a hunting preserve in Idaho.

Other indicators for high-fence bulls include beating the previous World Record ostensibly by nearly 100 points. And notice the smooth, almost groomed coat on this bull. Truly wild elk will typically have a bushier looking coat, especially on their mane. The new world’s record elk may still be out there, but this bull isn’t it.