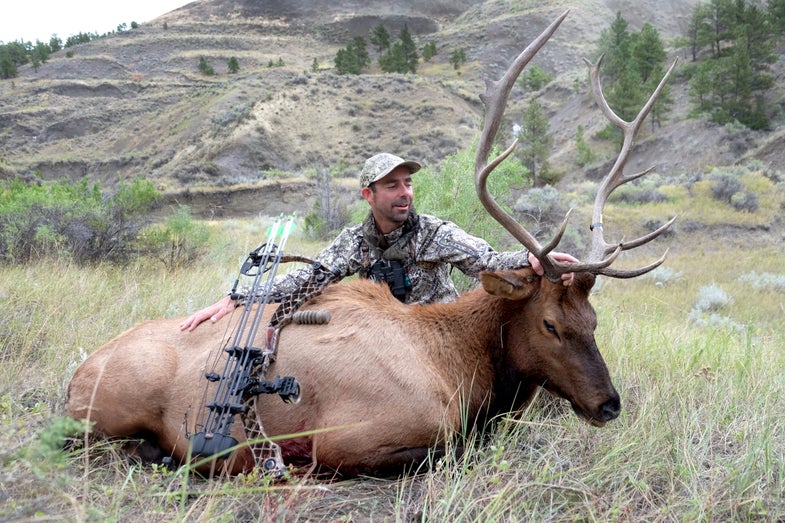 The Department of Transportation caution sign on U.S. Highway 191 seems wildly out of place. In the unbroken vastness of northeastern Montana’s shortgrass prairie between Malta and Lewistown, the sign alerts motorists: “Elk Crossing, Next 10 Miles.”

The wide-open prairie looks as much like elk country as the Jersey Shore looks like pronghorn antelope country.

But the sign is the unofficial gateway to the Missouri River Breaks, one of the most unexpectedly productive elk-hunting grounds in North America and my favorite landscape on Earth.

The highway sign makes a little more sense as you approach the Missouri River. Grassy benches tip toward the river the way Ernest Hemingway described the slide into bankruptcy: “Slowly at first and then all at once.” Scattered islands of ponderosa pine replace the sagebrush. Folds in the prairie deepen into coulees—the local term for a wide, dry wash—and then arroyos (a coulee carved by water), and then full-on canyons as they drop into the river valley.

Where Highway 191 crosses the Missouri—carried across the river by one of only two bridges on the 400 miles of river between Great Falls and Fort Peck—the Big Muddy is just that—a swirling, chocolate current. There’s a campground on the south shore of the river, the James Kipp Recreation Area, where you can spend the night or throw a line for channel catfish and paddlefish.

But not far downstream of the highway, the river widens and slows as it enters Fort Peck Reservoir. This is where I’m taking you, to the Missouri River Breaks on the north shore of the reservoir, to my hunting homeland.

If you associate elk with alpine basins and high-mountain timber, the Breaks can be disorienting. The terrain here doesn’t go up. It goes down—into coulees, gouges, canyons, and eroded rivulets that cut through crumbly soil that hides dinosaur fossils, Indian spear points, bleach-white bones, and cast-off horn sheaths of ancient bison.

It’s as rough as any mountain range. The Breaks also go up, tapering to gumbo knobs, sandstone spires, and a confusion of eroded cliffs and crumbling buttes loosely held together by sloughing dirt ridges. It’s like a landscape made of biscuit batter.

And, in good years, it hides more elk than you’d ever imagine.

These dryland prairies and timbered badlands are the native habitat for North American elk. This is where Native Americans hunted them for generations, and where Lewis and Clark observed endless herds of wapiti as they traveled the Missouri. It’s only been in the last 125 years that elk, pushed by homesteaders and hunters, became mountain animals. Elk were restored to the Breaks in the middle of the last century, and they’ve fully reoccupied their historic homeland.

Hunting them in this wide-open country, especially with a bow, has its own set of challenges. It’s a spot-and-stalk game. The open country requires graduate-level of stealth. The changeable wind can turn sure-thing ambushes into game-spooking busts. And any precipitation converts the gray soil into a greasy, boot-sliding gravy called gumbo.

Bulls in the Breaks

I can hunt anywhere in the world, but I keep coming back to the Breaks, usually with my bow and almost always alone. My solitude owes to the remote roughness of the country; few of my friends care to hunt with me because it’s a physically difficult enterprise. My visitation frequency owes to its proximity; if I leave my house at noon, I can be deep in the Breaks by mid afternoon. And my fidelity stems from its public ownership. My hunting homeland is managed by the U.S. Fish and Wildlife Service and the Bureau of Land Management, so I don’t have to ask anyone for permission to visit.