A 77-year-old got tired of waiting for officials to respond to reports of a distressed animal, and dispatched the federally-protected deer herself 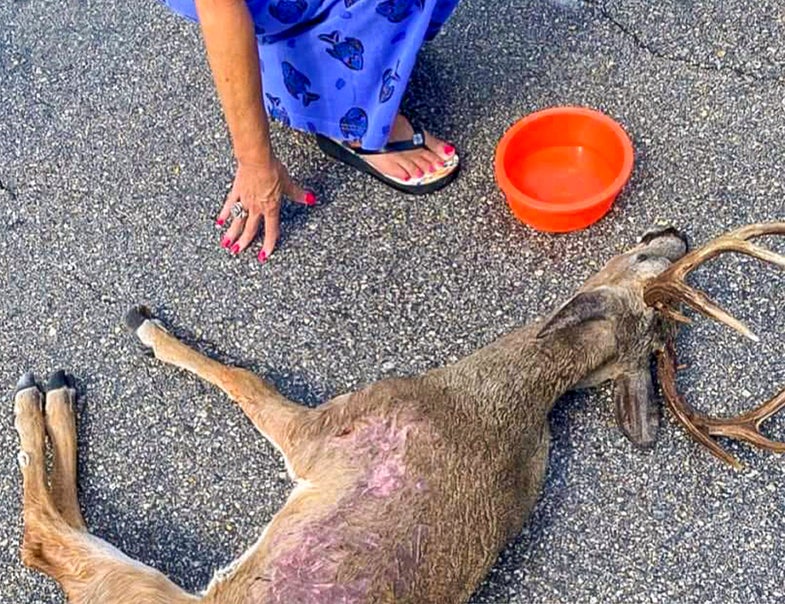 A group of residents tried calling the authorities after they found the buck lying in distress in a neighborhood on Nov. 16. Save Our Key Deer / Facebook
SHARE

Can you be convicted of a crime for killing a federally protected animal that is clearly suffering at the time? Or better yet, should you be? These are questions that prosecutors will have to ask themselves as they confront the case involving Wendy Kilheffer, a 77-year-old resident of Big Pine Key who shot and killed an endangered Key deer in a residential area last month.

Kilheffer has since been charged with a misdemeanor for taking an endangered species. If convicted, she could face up to a year in prison and a $100,000 fine. She was arraigned in U.S. District Court on Dec. 16 and was released on a $10,000 bond, according to court documents.

The U.S. Fish and Wildlife Service began its investigation of Kilheffer on Nov. 18. The agency released a brief statement that day explaining that the fatal shooting of the Key deer occurred in a residential area on Big Pine Key on Wednesday, Nov. 16. The statement did not include additional details behind the shooting, however, and a local wildlife advocacy group attempted to set the record straight with its own news update on Nov. 18. The group, Save Our Key Deer, claimed that Kilheffer was acting out of compassion when she walked up to the buck while it was suffering and shot it humanely in the head.

How a Call for Help Eventually Led to a “Mercy Killing”

In its news update that was shared to Facebook, Save Our Key Deer explained that the deer’s story began on Nov. 9, when a Big Pine Key resident found the buck in distress with ropes wrapped around its antlers. The ropes had gotten entangled in a fence, and the buck was “violently thrashing” to free itself.

“The thrashing caused the buck to sustain severe cuts and abrasions on both sides of [its] body,” SOKD explained in its update. “The resident was able to free the deer from the fence but could not get rid of the numerous rope strands.”

After the buck ran into the woods, another resident contacted SOKD, and the group immediately notified the Florida Fish and Wildlife Conservation Commission by calling the agency’s wildlife hotline. Federal and state wildlife managers along with SOKD volunteers tried to re-locate the buck but were unsuccessful. It wasn’t seen again until a week later.

By that time, Nov. 16, the buck was in bad shape, according to SOKD. A group of residents found it lying in the neighborhood “in extreme distress,” and they immediately called the FWC wildlife hotline again. They were able to remove the ropes from the buck’s antlers, and they tried giving it water before moving it to a shaded area on private property, where it continued to suffer and struggled to breathe. Although the buck was never diagnosed by a veterinarian, the group claimed that its organs were likely failing due to “capture myopathy,” which can occur when wild animals are overly stressed from being trapped or relocated.

The residents sat with the suffering deer for more than two and a half hours as they repeatedly called the FWC hotline and waited for a wildlife officer to arrive, according to SOKD. Eventually one of those residents got tired of waiting and she took matters into her own hands.

“At that time, someone took it upon themselves to put the agonized buck out of its misery with a shot to the head, as would have been done by an appropriate officer if they ever showed up,” SOKD writes.

The group concluded that while it doesn’t condone Kilheffer’s decision to put the buck down, “it understands what led up to it.”

Inefficiencies at the Root of the Problem

According to SOKD president Valerie Preziosi, the incident also speaks to a larger issue regarding the FWC, the USFWS, and the agencies’ consistently slow response to animal-in-distress calls. Preziosi says this has been an ongoing issue for years, as the state agency is stretched too thin to respond quickly enough to every call that comes from the Keys. She says that USFWS has also reduced its staff at the National Key Deer Refuge on Big Pine Key. And because calls to the FWC hotline are routed through dispatch instead of going straight to the refuge, this just adds to the delay in response time.

“One week after this shooting, a woman hit a Key deer [on the highway] and it flipped into the woods but was still alive and conscious. She called 911 and they connected her to the FWC hotline, and it took 24 hours for somebody to finally euthanize the animal,” Preziosi tells Outdoor Life. “24 hours is just too long.”