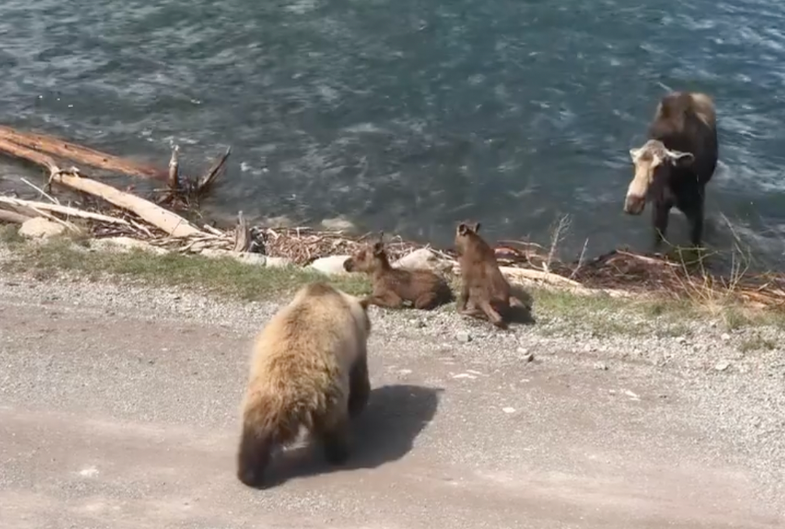 A stunning video that was uploaded to YouTube and Instagram last weekend shows a grizzly bear stalking a moose family and killing a newborn calf in Montana’s Glacier National Park. A separate video that was recorded the following day shows the bear returning, but this time, the moose is able to defend her remaining calf and runs the grizzly off. The three-day ordeal for the moose began on May 27, at the Many Glacier Hotel, where a group of hotel employees watched the scene of events unfold from the safety of a viewing deck.

According to Joshua Camareno, an employee who told USA Today about the incident, it all started when a cow moose showed up on the lakeshore of the hotel property with her two newborn calves. Within a few hours, a grizzly bear appeared and started creeping toward the lake, testing the moose. This happened at least four times, Camareno explained, with the cow charging the bear and the bear running away briefly before returning to the lake.

The graphic footage that was recorded on May 28 shows the bear moving in for the kill and snatching up the moose calf. The griz then drags the dead calf into the nearby woods to feed.

On Sunday, as the second video shows, the bear returns to the scene of the attack to find the moose more aggressive than ever. The moose protects its remaining calf and runs the grizzly off.

Park Service personnel came out to the hotel later that afternoon and hazed the moose away from the hotel and into the nearby woods, according to USA Today.