A Pacific Waterfowl Oasis Ran Out of Water. These Duck Hunters Are Footing the Bill for Some More

The California Waterfowl Association is trying to rehydrate the Klamath Basin wetlands by buying up the one thing most ranchers refuse to sell. Will it work? 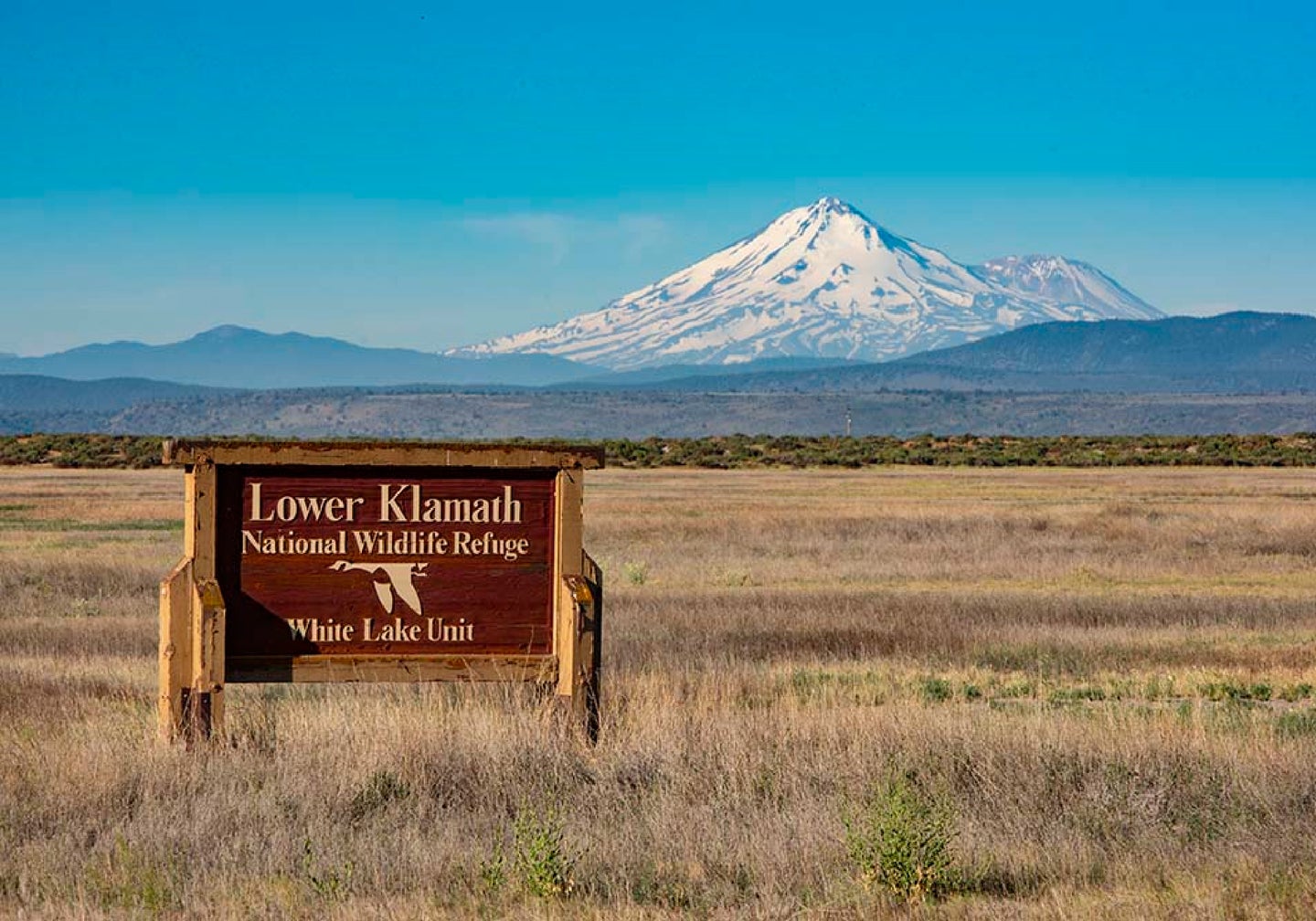 After a few years of extreme drought conditions, the Lower Klamath and Tule Lake National Wildlife Refuges on the California-Oregon border ran out of water this week. Sit back and chew on that for a minute.

Convenience stores run out of water. Natural disaster relief shelters run out of water. But two national wildlife refuges, one of which was founded as the first waterfowl refuge in America, running out of water? If that sounds apocalyptic, it’s because it is—or at least it is for the millions of birds traveling the Pacific Flyway that rely on the area’s wetland habitat as a rest stop.

Along with all those waterfowl, the Klamath Basin provides water for residents, irrigators, endangered salmon, steelhead, suckerfish, and other wildlife. In other words, it’s stretched pretty thin. So thin that, as drought conditions have ramped up in the area over the last few decades, the refuges and their young water rights find themselves with very little water. (According to Western water law, older water rights take priority over younger ones, especially in times of shortage.)

This all culminated in choking dryness this week, and on Monday, Aug. 29, the U.S. Fish and Wildlife Service announced it would close the two refuges to all bird hunting for the 2022-2023 season. The closure is temporary and the FWS plans to reopen hunting access “when water returns to the refuges and habitat conditions improve,” according to the Klamath Basin Refuges Facebook page. But exactly when that might happen is uncertain at best, especially as the other stakeholders in the Klamath Basin—the area tribes and their fish conservation efforts, the irrigation districts with their ranchers and farmers, and others—plan to fix their own issues created by this shortage whenever the water decides to come back.

A group of duck hunters aren’t willing to wait that long. They want water back in the refuges right now. (Actually, yesterday or last year would’ve been better, but at this point they’ll take what they can get.) Two years ago, Wood River Valley rancher and former duck hunting guide Kurt Thomas saw the writing on the wall and did something that most Western ag producers would sooner bury themselves alive in their drought-choked soil than do. Thomas decided to sell some of his historic water rights.

So who are the lucky buyers? Ideally the FWS, if they can make an offer that Thomas finds financially viable sometime in the next year. Until then, the California Waterfowl Association is coughing up the dough for a year-to-year lease of 3,750 acre-feet of Thomas’ water right, the oldest one in the nearby Wood River Valley of southern Oregon. These hunter-conservationists are determined to bring back one of their favorite honey holes and one of the most crucial parts of the Pacific Flyway—come hell or, well, you know.

The Road to Here

It might seem hard to believe today, but no one ever thought these wetland-rich refuges would end up this thirsty.

“When Theodore Roosevelt created the Lower Klamath refuge in 1908, reliable water supply was not codified into the creation of that refuge,” CWA Lower Klamath Refuge Task Force chairman Rob Plath tells Outdoor Life. “Then the Bureau of Reclamation came in and transformed that basin from a series of swamps and lakes into fertile agriculture land and the priority was to provide water to the irrigators to do their farming.”

After the area was converted into the agricultural stronghold it is today, which happened when veterans homesteaded after returning from the World Wars, much of the water the refuges received came from the surrounding pastures.

“Over the years the refuges got water, but almost all of it was tailwater from irrigators. At the time, there was plenty. The Bureau of Reclamation provided all the water that the irrigators needed through an irrigation season, through winter flooding, et cetera,” Plath says. “A lot of that was diverted from the Klamath River and the Lake into the lower basin to feed those irrigators.”

Things were going along fine for a while until dams started popping up and altering the flows of the river. A growing number of irrigators also started taking their toll as phosphorus and nitrogen levels increased due to run-off from cattle operations and farm input. Then at the turn of the 21st century, disaster struck.

“Around 2001, the lake levels were getting desperately low. The tribes in the Klamath Basin have religious and cultural connections to the sucker fish in that lake, and the sucker fish population was getting desperately low. [They were] ruled endangered. Salmon and steelhead also suffered downriver because of the limited lake flows and the power generation making the river flows inconsistent and stagnant,” Plath says. “[The rivers would] pool up and algae up and we had die-offs of salmon on low-run years. So you had these environmental warning signs that were addressed with the ESA in 2000. With that, water was reprioritized to provide for the needs of the listed species. That started cutting away at the amount of water that the irrigators would get.”

The tribes of the Klamath region have worked hard to protect salmon, steelhead, and suckerfish, and they still face uphill battles with species conservation efforts today as drought conditions worsen. Meanwhile, as the refuges continued to shrivel up, Thomas looked around and had some conversations with the Klamath Basin Refuge Complex manager Greg Austin.

“We started a process of exploring if we could transfer water from Wood River Valley, specifically this ranch, down to the refuge. And it turns out we could. But the government wanted proof of concept, so CWA stepped in as essentially a bridge and paid for a water transfer, which they donated to the refuge,” Thomas tells Outdoor Life. “Between us, we managed to get a transfer approved by the Oregon Water Resources Department last September 2021. We actually put water on the refuge in 2021 and again in 2022. And that’s where we are today.”

A Drop in the Bucket

But wait a minute. If Thomas sent 3,750 acre-feet of water to the refuge this year, then why did it still dry up completely? The short answer is that, because of how bad the drought has been, Thomas’ water wasn’t enough. It did make it to the refuge in July and August, but filled a different area than the one it was destined for.

According to the CWA, it would take at least 30,000 acre-feet (eight times the amount of water that Thomas sent) to maintain quality habitat at the refuge. There has, at least, been some proof of concept for this pilot project. The water that Thomas sent in 2021 made it to the refuge, and Thomas hopes to be able to deliver more water there by next spring.

“The idea is to get more of this done, but this ranch of ours has been the pilot project to show the government that this could work,” Thomas says.

The cost of water is high, though, and the cost of reliable senior rights to that water is even higher. CWA has already spent a lot of money on Thomas’ right alone, and if this project is to remain viable, the FWS would need to take over what the CWA has already started. And based on the math, if water rights from irrigators are going to make a real difference on the ground, the FWS will need a lot more of them.

“This might be an example for other groups to say ‘yeah, we all probably ought to sacrifice a little bit to protect these waterfowl and shorebirds,’” Thomas says. “But that’s not a challenge to anybody. I’m doing what I’m doing, I’m not trying to be an inspiration to others. But that’s how you start stuff though, you do it yourself.”

Thomas freely admits that there’s a financial interest in selling his water right. It means he can rely less on cattle production and essentially gets paid to leave the resource alone. When asked if water rights might be the next conservation easement or federal CRP commodity, he agrees that this framework will become more popular in the future and is just a new form of “capitalism writ large.” But ultimately, he chalks up his interest in helping rehydrate the refuge to his guiding days in the late ‘60s.

“We were blessed as young men to see the sights that we saw. If I could help save the legacy of those refuges with water and get some of my neighbors to do that, I’d feel really vindicated,” Thomas says. “Had I not guided, I don’t think I would have the same nostalgia for recreating what we saw in those days, which were vibrant refuges.”