EHD Could Take a Lethal Toll on Deer During Record Drought 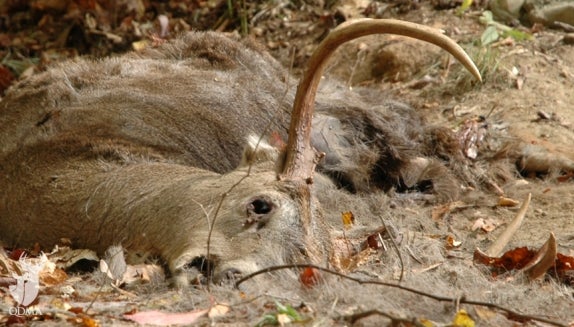 EHD and bluetongue disease can be fatal for whitetail deer—and the diseases are more prevalent during drought.
SHARE

Extreme drought over much of the Western U.S. may be triggering a deadly outbreak of viral deer diseases that could impact populations over a broad area. Bluetongue and epizootic hemorrhagic disease (EHD) are two of the most common and lethal deer diseases, and they’re more prevalent during droughts.

Idaho Fish and Game is continuing to receive reports of dead deer in the Kamiah area with approximately 250 to 300 whitetails dying, according to state wildlife staff, which confirmed the disease is a type of hemorrhagic disease.

Already 38 deer have tested positive for EHD in eastern Washington state. A pair of whitetails near Davenport, Wash., tested positive for bluetongue and EHD. Another 36 deer tested near Colfax, Wash., had EHD, reports the Spokesman-Review newspaper. The Washington Department of Fish and Game (WDFG)  is receiving reports of dead whitetails, and samples from deceased animals are being collected.

“We are asking people if they find dead deer or [deer] acting unusually to report them,” said Staci Lehman, a spokeswoman for WDFW.

“We are bracing ourselves for this being a pretty bad year,” said WDFW veterinarian Kristin Mansfield.

While dead deer from the diseases are confirmed in Idaho and Washington, a wider outbreak has not been confirmed, according to Lindsay Thomas, Chief Communications Officer for the National Deer Association (NDA), headquartered in Georgia.

“We’ve received reports of EHD in some parts of New Jersey and New York, but not states farther west that have been impacted by severe drought,” says Thomas. “It’s not automatic that EHD and bluetongue rampantly spread through a deer herd because of drought. Though dry weather is conducive to breeding of biting midge flies that spread the disease.”

Thomas says drought produces stagnant water areas that breed midges. Plus, a lack of water concentrates deer. Combine the two, says Thomas, and conditions can be right for EHD and bluetongue outbreaks.

“Deer become immune to the disease once infected if they survive,” Thomas adds. “Disease immunity also transmits to fawns for about six months if its doe or buck had EHD or bluetongue.”

“The diseases are most prevalent in the southeast U.S., but are spreading to other states to the north and west,” Thomas said. And with drought in the West, conditions are conducive to disease outbreaks, as seen now in Idaho and Washington.

Michael Atamian, district biologist in Washington, said if the outbreak is bad and extensive enough it could impact hunting seasons.

“It’s going to be tough with drought conditions as it is,” said Marie Neumiller, the Inland Northwest Wildlife Council’s executive director.

Major eastern Washington EHD outbreaks occurred during droughts in 1988 and 2004. Whitetails in Kamiah, Idaho,  needed years to rebuild populations after a major EHD outbreak in 2003.