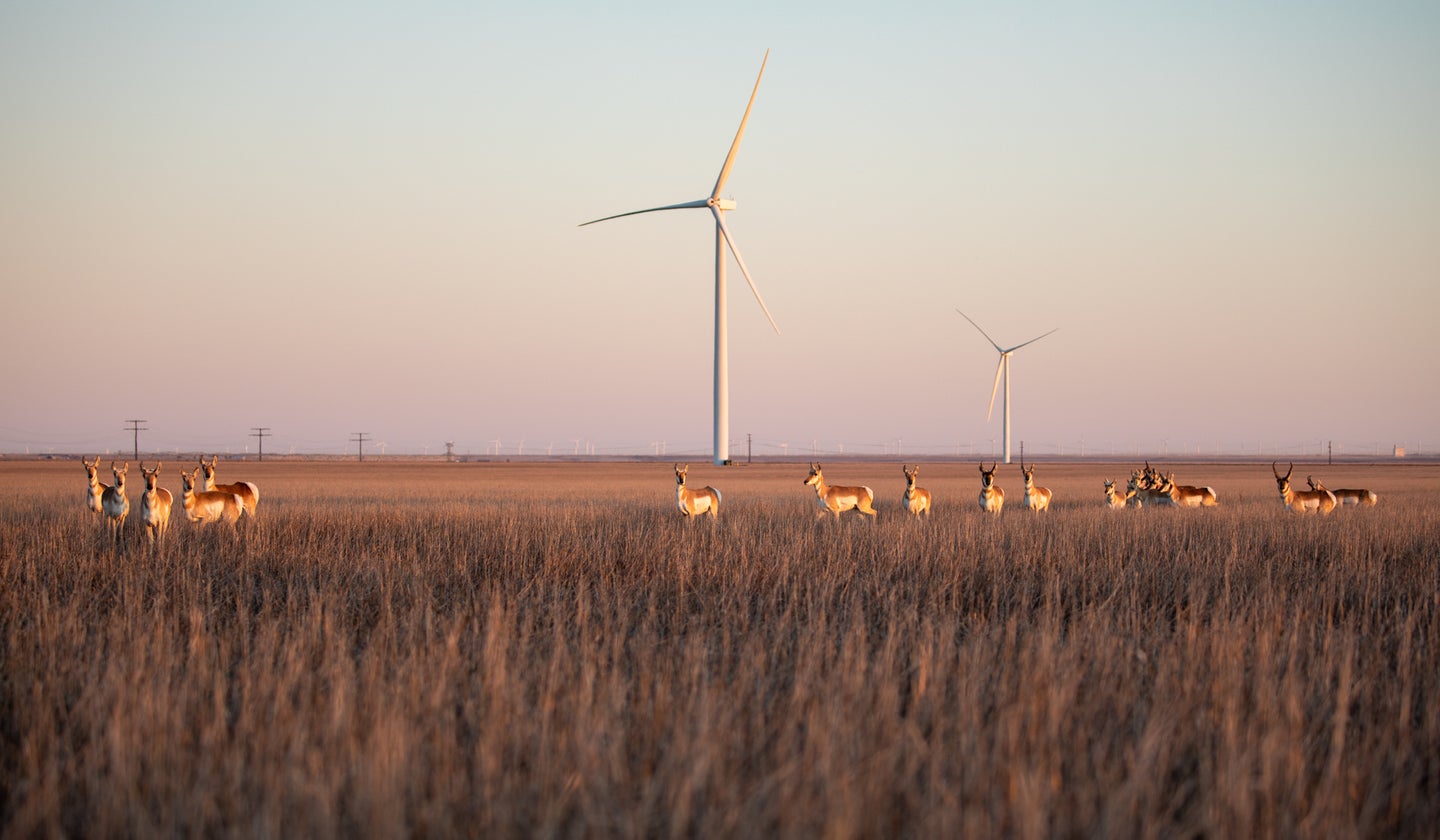 Can Wildlife and Clean Energy Coexist in the West?

IF YOU WANT to see one of the next great frontiers of the West expanding in real time, take a drive through the Clearwater Wind Project in eastern Montana. It’s still under construction, but by the time Montana’s biggest wind farm is fully operational, it will feature 269 turbines, an 85-mile transmission line, access roads, substations, and other facilities. It will generate 750 megawatts of energy, or enough to power about 225,000 homes. Since the project is largely built on private land, it’s estimated to pay about $226 million over 30 years to leasing landowners and another $217 million in property taxes to Custer, Garfield, and Rosebud counties.

But this wind farm also represents a single skirmish in the bigger fight to balance the needs of wildlife with our own. Clearwater is built smack in the middle of Montana’s sagebrush steppe ecosystem. Greater sage grouse, mule deer, pronghorn, and other species live (and migrate through) here year round.

Scientists are just beginning to understand the full extent of wildlife migration across the West. As habitat loss and fragmentation looms, research initiatives are unfurling maps of historic animal routes, while GPS collars track current pathways and algorithms predict future ones. But as this base of knowledge expands, so does the pressure to build domestic capacity for renewable energy, lithium mining, and transmission lines. And if the outcome of the Clearwater project is any indication of the future, habitat will lose.

Renewable energy production grew 90 percent in the U.S. from 2000 to 2020. Meanwhile, mule deer populations have tanked and the seemingly ubiquitous pronghorn is teetering. Eighty percent of the sage grouse population has died off since 1965, and half of that loss has occurred since 2002. Sagebrush habitat is shrinking by 1.3 million acres a year.

In the long run, a win for America’s climate is a win for America’s wildlife. But if the West’s iconic wildlife is going to survive long enough to reap the environmental benefits of the current renewable energy arms race, they’ll need reinforcements much sooner.

The Canary in the Wind Farm

Greater sage grouse are one example of just how effective regional efforts to conserve habitat can be. Every state within the sage grouse’s range has established an individual action plan to keep the dancing bird from an endangered species listing. The Sage Grouse Habitat Conservation Program is Montana’s answer.

Montana law requires developers of all kinds—commercial real estate, energy, mining, communication, agriculture, forestry, and others—to limit their impact on sage grouse habitat as much as possible. The Montana Sage Grouse Oversight Team uses an algorithm to calculate how many units of damage, also known as “debits,” a project will inflict on general and core sage grouse habitat. Whatever damage developers can’t avoid must be offset, usually by paying MSGOT $13 per debit to spend on habitat work elsewhere. This work usually takes the form of private land conservation projects that pay Montana landowners for equitable habitat “credits” created on their acreage.

Mitigation banking makes sense on paper and can help ensure a zero net loss of habitat for lots of species in the face of growing development. But what happens when a developer refuses to cover the full cost of their impact?

When MSGOT delivered Clearwater Wind Project developer NextEra the final impact score of 1,667,703 debits at a cost of over $11.3 million in November 2020, the company was so taken aback by the price tag that they responded with a letter from their lawyer.

“This…[is] an unprecedented and imponderable cost for sage grouse mitigation,” reads the letter. “Such extreme and disproportionate costs threaten the economic viability of the Clearwater Project, and energy projects in the state in general.”

According to the letter, the Clearwater project received a preliminary cost estimate in March that was less than half of the November estimate, which might explain their surprise at the updated amount. The culprit? A new sage grouse lek that popped up less than four miles from where one wind turbine was slated for construction, which sent the calculated impact of the project through the roof.

“An area of about 4.5 miles around every lek is where 90 percent of the sage grouse hens will nest,” says Brian Martin, an ecologist with The Nature Conservancy. “So the more intact that 4.5-mile area is around each of those leks, the greater the possibility that sage grouse will persist there.”

Clearwater made it quite clear they weren’t going to pay $11.3 million to fix their impact to sage grouse habitat. According to a statement from MSGOT, the company instead lowered its costs to about $5.6 million by adjusting plans for the project. But after negotiating a discount of $1.5 million, Clearwater ended up paying just over $4 million.

While the budget for the Clearwater project hasn’t been made public, another Montana wind farm that produces a third of the energy Clearwater will with less than half of the turbines cost $406 million to build. By those calculations, the budget for the Clearwater project could end up being around $1 billion. That $1.5-million discount Clearwater received—only the second the Sage Grouse program has ever administered—would equate to just .15 percent of the energy company’s estimated project budget. Meanwhile, parent company NextEra made over $17 billion in operating revenue in 2021 alone.

MSGOT spends almost every penny it receives on crucial habitat projects across the state. These conservation efforts benefit not just sage grouse, but other species that rely on intact sagebrush habitat for seasonal ranges and migration, too. The Program occasionally has to turn down habitat project proposals from willing landowners due to a lack of funds, a sign of both its popularity and its finite budget.

“The Montana Mitigation System was designed with an all-hands, all lands approach. If the greater sage grouse was listed as an endangered species, it would affect everyone. It is in the best interest of the State to keep management of wildlife and the economy in the hands of Montanans to allow for flexibility in addressing threats to sage grouse populations,” an exclusive statement from MSGOT says. “The Program recognizes the important role landowners play in providing habitat for sage grouse.”

This isn’t NextEra’s first go-around with the costly complexities of habitat conservation in the West. A different NextEra subsidiary killed 150-plus eagles over a decade at its Wyoming wind farm—without getting necessary permits from the U.S. Fish and Wildlife Service. The company coughed up almost $10 million in fines and restitution alone for harming endangered golden eagles and then spent another $27 million on an Eagle Management Plan. Much like their oil and gas forebears, solar fields, lithium mines, wind farms, and transmission lines interrupt contiguous habitat, forcing wildlife to reroute their travels, relocate their ranges, and expend more energy in the process. Direct mortality on the scale of the NextEra eagle incident is infrequent, but disruptive meddling is not.

A new study from the Wyoming Migration Initiative and Pew Charitable Trust says the two biggest consequences of energy development are direct habitat loss, like that caused by a security fence around a solar project that keeps ungulates from traveling through an area, and indirect habitat loss, which is simply the result of wildlife steering clear of landscape disturbances and the habitat that surrounds them.

“Such avoidance behavior can be long term, can extend for years, and is especially problematic because it displaces animals away from habitat that would otherwise be usable, effectively reducing the amount of functional habitat,” the study says. “Such indirect habitat loss…has been linked to population declines.”

Big Game Is Vulnerable Too

The conflict doesn’t end with birds and wind turbines, although that particular match-up is one of the most popular pillars in the anti-renewable agenda. Fences surrounding a Wyoming solar field funneled thousands of migrating pronghorn onto a state highway during a bad storm in 2019. On the Oregon-Nevada border, exploratory lithium drilling is already interrupting intact sagebrush habitat after former Secretary of the Interior Ryan Zinke rolled back protections. A wealth of research points to ungulates and birds avoiding large swaths of habitat that feature energy infrastructure and other disturbances. One study from the University of Wyoming found that pronghorn returning to their winter home ranges avoided wind turbines that had been built there in their absence.

“This relationship was most evident during winter 2011, which coincided with the most severe winter of our study,” reads the study. “Our finding that pronghorn avoided wind turbines within their winter home ranges has important implications for future wind development projects, particularly in areas known to fulfill important seasonal requirements of pronghorn populations.”

Obviously, this avoidance isn’t unique to the renewable energy industry. Wildlife responds to oil and gas exploration and development the same way, if not worse. Steve Belinda, conservation director of the Mule Deer Foundation, remembers when drilling in the Pinedale Anticline natural gas field was being proposed for 198,000 acres of sagebrush habitat in western Wyoming in the 1990s. The mule deer herds in the area took a massive hit in the years that followed the project. He wonders what would have happened if developers had known what the future held for one of the West’s favorite ungulate species.

“If we had gone back to before the Pinedale Anticline and said we were going to lose over 40 percent of the mule deer herd by allowing development in that winter range, would we have authorized it? I was a biologist when it was authorized. The answer is no. The public would have run us out,” Belinda tells Outdoor Life. “Yet that’s what happened. And we’re supposed to be okay with it? How many times can you let that happen before you don’t have a deer herd anymore? We have to use other forms of science and information that we know from similar activities and apply it to renewables.”

The Lesser of Two Evils

It’s often difficult to distinguish concern for the habitat crisis from an anti–renewable energy agenda, proponents of which often use the “dangers to precious wildlife” defense to dismantle the need for an energy transition. The difference lies in acknowledging that climate change is likely more dangerous for all wildlife than renewable energy development. That’s tough to quantify, sure. But you only have to look at how wildfires, drought, increased temperatures, and extreme weather events have already displaced and decreased populations.

But just because an energy transition might solve a lot of problems doesn’t mean it’s above critique or improvement. If renewables are going to be the silver bullet for the future of our planet, they’ll have to leave room for wildlife—and their migratory corridors and seasonal ranges—along the way.