Watch Out for Falling Iguanas This Christmas, and Other Cold-Weather Wildlife Hazards

When temperatures take a dive, some cold-blooded species respond by hibernating, freezing, falling, or dying 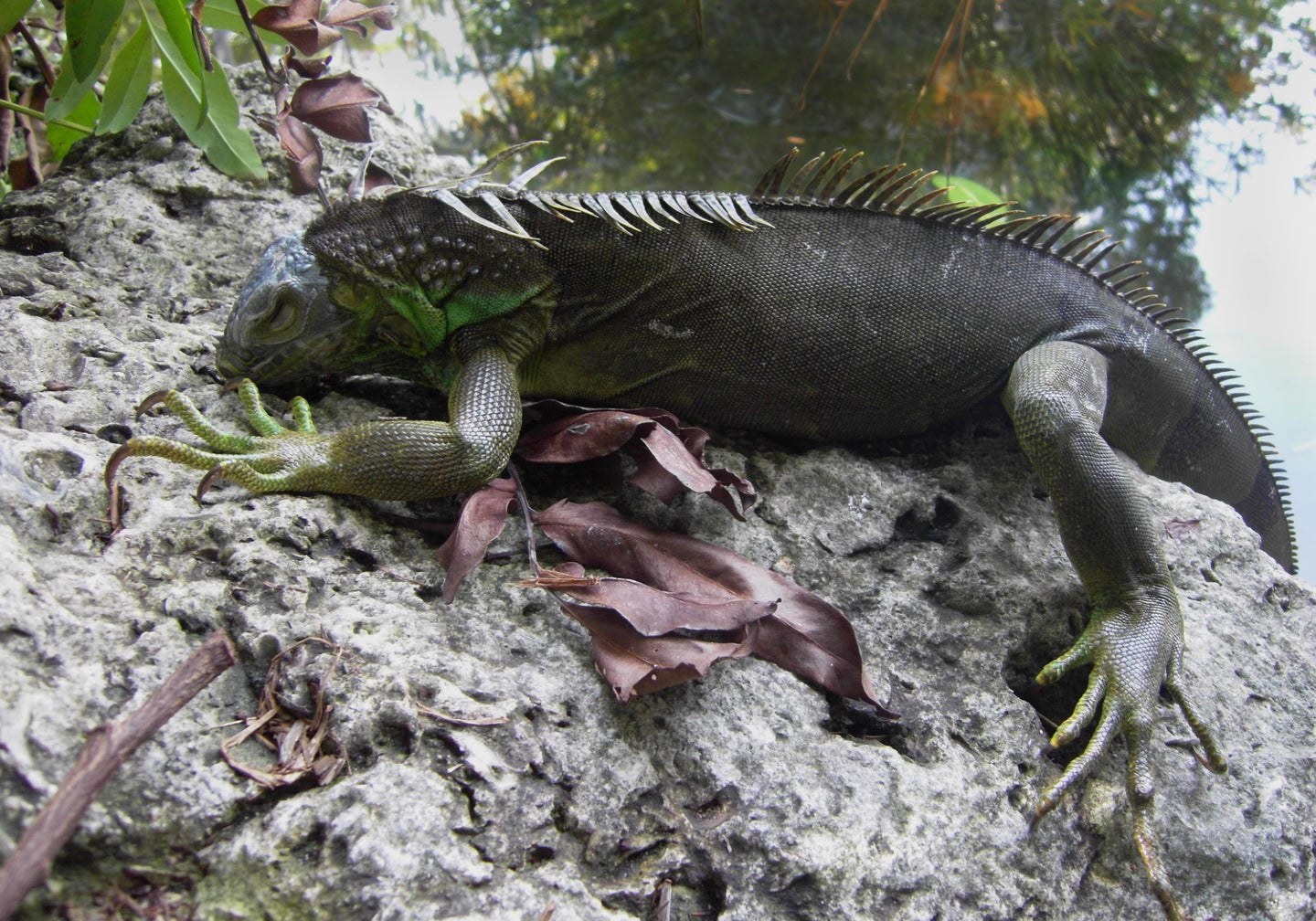 The entire country is bracing for record-low temperatures this week as the winter solstice came and went. While most of the northern states have made it through the worst of their conditions, some southern states are still waiting for Winter Storm Elliott to hit. Temperatures in the Deep South are expected to drop into the teens on Thursday night, which can spell disaster for fish, reptiles, and amphibians. In fact, such conditions are so bad for cold-blooded critters that they actually present a safety threat to humans, too: The National Weather Office of Miami issued a public warning for cold-stunned iguanas falling from trees across Florida in 2020 and 2021.

What are you supposed to do when an iguana falls out of your tree? Well, since the species are nonnative, the Florida Fish and Wildlife Commission tells us this is actually a good time to remove the pesky creatures. But no matter what, the FWC warns, never bring them into your home as they could wreak a little havoc once they thaw out.

Other cold-blooded species have managed to fine-tune their frigid weather survival skills over the years. Alligators are known to burrow down into the banks of rivers and ponds, where their body heat insulates the space around them. Sometimes they even stick their snouts out of the water and let ice form around it. This allows them to keep breathing while they wait out the weather.

Read Next: Waterfowl Fall from the Sky by the Hundreds as Lunar Eclipse Coincides with Snowstorm in Central Oregon

Frogs hang out at the bottom of waterbodies to hibernate during the colder months. In especially cold instances, their bodies freeze and they’ll even stop breathing. In this state, they rely on their livers to produce enough glucose to keep their organs from filling with ice crystals. Up to 70 percent of the water in a frog’s body can freeze solid without the frog dying.

Unfortunately, other wildlife species aren’t so well evolved or lucky when it comes to cold weather. In March 2021, officials with the Texas Parks and Wildlife Department estimated that at least 3.8 million saltwater fish (primarily speckled trout and redfish) died during winter storm Uri. With inshore water temperatures dropping into the 40s in many of the shallow bays and back lakes, many of the fish couldn’t make it to deeper water fast enough.

Sea turtles suffer a similar fate during inescapable cold snaps. They become cold-stunned and can’t swim or fend for themselves in the face of predators. They usually wash up on beaches, where they stand a small chance of thawing or being rescued.

These cold temperatures come just shortly after southern states endured record-setting heat at the beginning of December. Such large swings can mess with migratory wildlife and aquatic species that time their departures to warmer regions based on climate conditions. The late heat tricks them into staying in their summer range longer, which puts them at risk of being in the wrong place when these extreme cold snaps set in. Weather extremes are just one example of how climate change impacts wildlife around the globe.

The situation isn’t much better for some warm-blooded marine mammals. Even though they’re much better at regulating their temperature and adapting to their surroundings, some can still suffer from hypothermia. In 2010, 244 endangered manatees were killed during a cold blast in Florida’s waters.