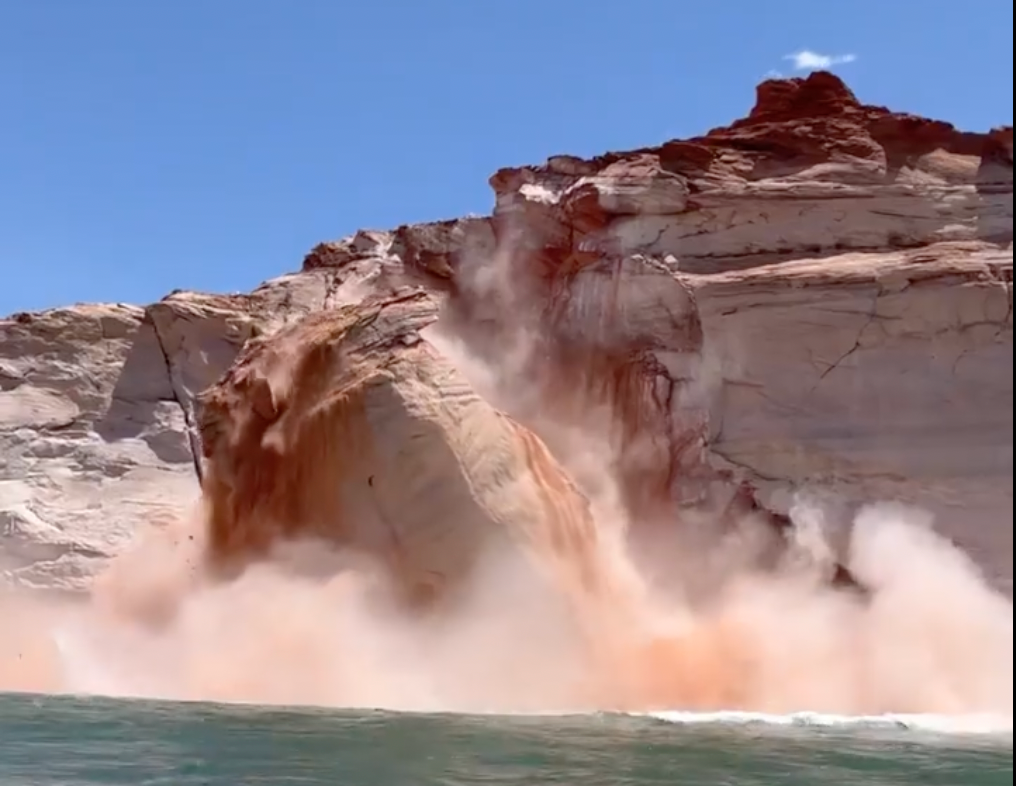 The wave caused by the rockslide was big enough to capsize a boat. Mila Carter
SHARE

Mila Carter and her husband were on Lake Powell over Memorial Day Weekend when they captured an amazing video of a huge rock wall collapsing into the lake. The two were heading toward Antelope Point Marina in their ski boat on Monday when they noticed rocks and debris breaking off the towering sandstone cliffs near the confluence of Warm Creek. Carter was filming the scene on her smart phone when the entire rock face broke off and plummeted into the water below.

Carter’s video, which was shared to Instagram, shows the giant chunk of canyon wall crashing down as she and her husband speed away from the oncoming wave caused by the enormous splash. She told KUTV News that the wave was “[big] enough that it would have just swallowed our boat and swallowed jet skiers or kayakers or anything else in its way.”

The video itself is mesmerizing. But it could also be a sign of bigger problems to come as the water crisis worsens in the Western United States—and especially in the Colorado River Basin.

Lake Powell’s current water level sits at 3,534 feet, which means it’s at 26.8 percent of its full capacity. Officials announced earlier this year that the reservoir has reached its lowest recorded level in its 58-year history. And last month, dam managers made the unprecedented move of delaying water releases from Glen Canyon Dam in order to boost water levels in the lake.

This was a monumental decision because Glen Canyon generates roughly five billion kilowatts of hydroelectric power annually, which is enough electricity to power about 450,000 households in the region. When the reservoir’s level drops below 3,490 feet, however, the dam’s turbines can no longer generate power, and this is the exact scenario that federal dam managers were trying to avoid.

Still, some experts are predicting there’s a chance that Glen Canyon Dam will no longer be able to produce power by 2024. And some geologists have pointed to the Memorial Day rockslide as a symptom of the current water crisis.

Joe Cook, a research geologist with the Arizona Geological Survey, told reporters last week that the lake’s critically low water levels likely played a part in causing what he called a “rock topple.”

“The saturation and then drying with the falling water levels kind of contributed to that thing falling over. It might have fallen over anyway but having a [shrinking] reservoir there may have sped up the process,” he explained.

Cook added that while these events are rare, they are powerful (and dangerous) enough that powerboaters, paddleboarders, and kayakers should be aware of their surroundings when recreating on Lake Powell.

“It just reminds you how strong nature is,” Carter said. “And we are just very small and not in control.”