Why Great Lakes Smallmouths Are Growing Larger Than Ever

Photo by Russell Graves The list of trophy smallmouth destinations is growing, particularly in the Great Lakes region, where lakes... 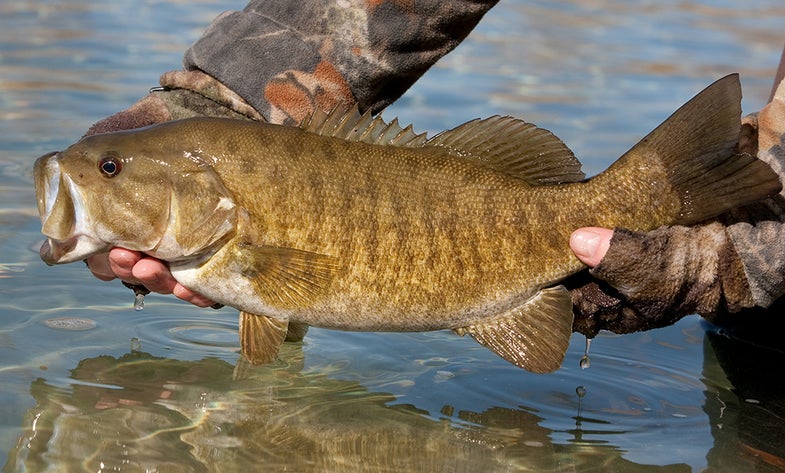 The list of trophy smallmouth destinations is growing, particularly in the Great Lakes region, where lakes Erie, St. Clair, Michigan, and Superior are making headlines. Why? Were these trophy fisheries there all along? A remarkable new study by University of Central Michigan and Michigan DNR fishery scientists, published in Transactions of the American Fisheries Society, suggests that at least one of these fisheries is new.

Beaver Bronzebacks
The Beaver archipelago is a group of islands in the middle of northern Lake Michigan. A comparison of fishery metrics taken from 1969 through 1984 and from 2005 through 2008 reveal drastic changes.

Despite their dramatic rise to dominance in the Beaver Island fish mix, neither the abundance nor the mortality of bronzebacks changed significantly from the historic periods. But smallmouth bass size structure indices (the proportions of fish greater than 12, 14, and 17 inches), growth rate, and body condition (plumpness) were significantly greater in the more recent period than they were 40 years ago.

Harvest regulation changes may have contributed to more large fish and the greater size structure observed in the 2005–2008 period, but it’s unlikely, since mortality didn’t change.

Interestingly, researchers attributed the changes to a cascading sequence of ecosystem changes, all directly or indirectly a result of exotic species that have invaded Lake Michigan since the 1970s.

• More smallmouth food: Individual bass in the Beaver Island population are among the faster-growing smallmouths in North America, and the proportion of large smallmouths in the Beaver Island population is almost double the North American average. The fast growth and large body condition require lots of food. The hard, rough bottom and the fecal pellets provided by massive expanses of zebra and quagga mussels provide both habitat and food for a variety of invertebrates eaten by smallmouth bass. The round goby, a dietary mainstay of Lake Erie smallies, invaded the area in 2006. And to round out the buffet, the crayfish population also appears to be increasing.

The Long View
Of course, no one knows what the Beaver Island fish community looked like 1,000 years ago. But we do know that in only 40 years—a period of time that coincided with the invasion by zebra and quagga mussels and topped off with a proliferation of round gobies and rusty crayfish—the formerly dominant bullhead dwindled to less than 1 percent of the fish in the area and lots of toad bronzebacks are there to be caught.

Might similar changes be happening elsewhere? John Clevenger, veteran Michigan DNR fisheries biologist and one of the authors of the Beaver Island study, replies, “Smallmouths seem to be increasing in some areas of upper Lake Michigan, but changes like those at Beaver Island will happen only if ideal habitat—rocky shoreline and protected spawning bays―is available.”