Ice Fishing Tips: How to Jig Up Jumbo Perch

Photo by Bill Lindner/Lindner Imagery Jigging up perch in the dead of winter can be fun, but hauling up 14-inch... 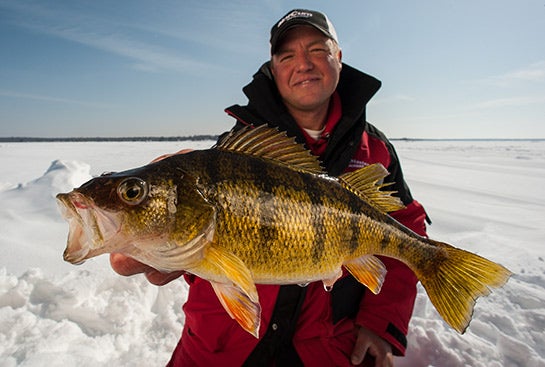 Jigging up perch in the dead of winter can be fun, but hauling up 14-inch fatties is sheer euphoria.

At times, icefishing for perch can be ridiculously easy, due largely to their voracious appetite. Indeed, catching a bucketful of dinks is often mere child’s play. That is not the case with big fish. When these so-called sumo perch start to chew, I become a man on a mission.

First, a basic description: Jumbo perch are big; sumo perch are so big they look entirely fake, complete with painted-on stripes and orange fins. Whereas icefishermen will sometimes measure a jumbo perch, sumo perch will make you pause for a deep breath when they reach the top of the hole and are then weighed. So how do you catch them? Here’s the lowdown.

Be a Hot Stick
Incredibly, some anglers think that icefishing entails a simple lift and drop of a small jig in a small hole augered in the ice. That does in fact often work for run-of-the-mill fish. For super-size perch, however, you need to dissect exactly what your lure is doing at all times. Here are three popular and easy-to-master patterns.

The Deadstick: Use a rod with a very light tip and lots of backbone, and simply allow the jig to sit motionless at fish-holding depth.

Jig and Sit: Jigging will often bring perch in but fail to get them to commit. This is the time you simply hold the jig motionless. Plastics will continue to move just enough to draw strikes on many days.

The Slow Lift: This is done just like it sounds. After jigging to bring perch in, slowly move the lure upward a few inches and hold. If they follow, repeat.

It’s these subtleties that will either spook these sumo perch or get them to commit. Different line types and lure combinations will have a similar effect. To take these larger fish with any sort of consistency, you need to make changes to your deliveries based on how the perch react.

Learn About Line
Line is always an important part of the fishing equation, but it takes on even greater significance in winter, when the bite can be so soft that it is virtually impossible to feel. But thanks to new specialized icefishing line, now you can see it.

Blood Run Tackle, for example, has produced an icefishing line called Cadence that is very similar to the old Stren Golden. A special coating prevents the line from soaking up water, allowing for better sensitivity. In addition, it’s easy to see this opaque line.

Bait ‘Em Up
Depending on the lake and conditions, sumo perch can be caught on dropper chains, rattle baits, or simple spoons. The Clam Drop jig, though, has been my most consistent big-perch lure regardless of the lake or conditions. It is a large tungsten jig with a line tie coming out of the top at a nearly 90-degree angle. The larger Clam Drop jigs (7/64-oz., 9/64-oz.) have a size 10 and a size 8 hook.

These larger sizes are extremely useful because they allow you to get down quickly, and the larger hook still has enough gap to hook these bigger fish. After all, anyone can catch a mess of nice perch, but the sumos will rock your world.