Colorado Ice Fisherman Catches $7,500 Lake Trout, Will Use the Money to Start a College Fund for His Sons 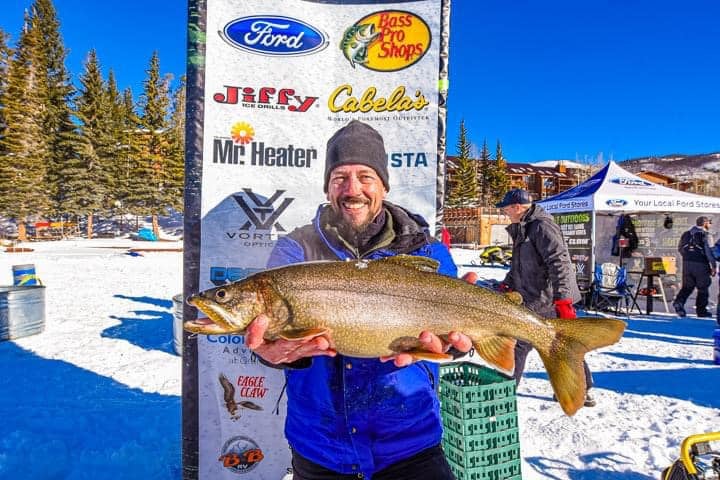 DeLumeau took home the cash prize for the heaviest fish with a 6.4-pound lake trout. via Facebook
SHARE

Ice fishing might not be the best way to put your kids through college. But for one lucky angler, who took home the cash prize for the heaviest fish at a recent ice fishing tournament in Colorado, it’s a start.

Erick DeLumeau was one of approximately 800 people who participated in the Colorado Cabin Adventures Ice Addiction fishing tournament that took place Feb. 20 in Grand Lake, Colorado. Sponsored by Clam Outdoors and organized by Tightline Outdoors, the tournament was the final event in the four-part Ice Addiction series, Denver’s Fox-31 News reports.

“The event at Grand Lake was incredible!” according to a Facebook post by Colorado Cabin Adventures. “We weighed the two biggest lakers we’ve ever weighed at Grand Lake and the weather was amazing! It was a true battle for first place!”

A total of $26,000 in cash prizes helped motivate the competition, and the top prize was a $7,500 purse—awarded to the angler who caught the heaviest fish, regardless of species.

DeLumeau landed his 25 1/2-inch lake trout around 8 a.m. on Sunday while fishing with his sons Ewan and Evan. He tells Outdoor Life that he regularly competes in bass fishing tournaments, but this was his first time competing in an Ice Addiction tournament.

“I was helping the boys get tangles out, so I told my 14-year-old [Evan] to watch my pole,” he says. “And as I was untangling my 10-year-old’s, I looked over and my pole was starting to head toward the hole. So I ran over and set the hook.”

Weighing in just shy of 6.5 pounds, the fish put him in the lead for the heaviest fish of the tournament. It was also their only fish of the day, so DeLumeau had to wait anxiously through the rest of the day as other anglers brought in their catches.

Michael Roschat was nearly able to bump DeLumeau off the podium when he brought in a laker that was half an inch longer than DeLumeau’s. It didn’t have the girth, though, and weighed 6.15 pounds. After everything was said and done, DeLumeau’s laker remained the top fish of the day, earning him the $7,500 cash prize.

“It’s a great feeling,” he said in an interview with Fox-31. “My [two] boys, I told them I’m going to share [the prize money] with them. They’re going to have a college fund.”